In this issue: Colorado’s O’Dea takes petition route to Senate primary ballot and Dunleavy gets another GOP challenger in Alaska’s top-four primary

Texas holds the first primaries of the 2022 elections in just over a month. Here are key dates to be aware of:

See the Texas Secretary of State’s website for details on who qualifies to vote by mail, ID requirements, and more.

Republican U.S. Senate candidate Joe O’Dea announced on Jan. 19 that he plans to submit petitions to make the primary ballot instead of going through the party’s nominating assembly. Colorado provides major party candidates those two paths to the primary election ballot.

U.S. Senate primary candidates taking the petition path must collect 1,500 signatures from registered primary voters in each of the state’s eight congressional districts. A candidate who takes the assembly path and does not win at least 10% of the vote cannot use the petition route to get on the same party’s primary ballot.

O’Dea is one of eight Republicans seeking the GOP nomination. Incumbent Sen. Michael Bennet (D) is running for re-election. O’Dea is so far the only GOP candidate seeking to make the ballot via petition, which must be filed with the secretary of state’s office by March 15. The Republican Party’s nominating assembly is April 9.

O’Dea’s campaign representative said, “Gino can stick his dishonest insults in his very own tax-and-spend-liberal ear. … Joe’s going to compete for every vote in every corner of the state — Republican insiders, Republican outsiders, and all the many Coloradans who are tired of Joe Biden and Michael Bennet’s failed leadership.”

The primary is set for June 28.

Last week, we also wrote about ad spending from candidates and satellite groups. Politico wrote this week, “Republican candidates and groups supporting them spent and reserved a combined $15.3 million on TV ads, according to our pals at AdImpact. Of that total, about $3.5 million was reserved by outside GOP groups.”

Incumbent Sen. Pat Toomey (R) is retiring. The primary is scheduled for May 17.

On Jan. 19, attorney Kevin Hayslett entered the Republican primary in Florida’s 13th Congressional District. Incumbent Rep. Charlie Crist (D) is running for governor, a position he held from 2007 to 2011 as a Republican.

Luna defeated Makki and three others in the 2020 Republican primary, winning 36% of the vote to Makki’s 28%. Crist defeated Luna in the general election 53-47%.

Florida is in the process of redistricting. Currently, the 13th District has a slight Republican lean of R+1. Most plans would give the Tampa-area district a more Republican tilt ranging from R+2 in the state House’s plan to R+14 in a plan Gov. Ron DeSantis (R) proposed.

The primary will take place on Aug. 23.

Pierce, who was elected mayor in 2017, said he was running due to frustration with Dunleavy and former Gov. Bill Walker (I). Walker is also running this year. The Anchorage Daily News described Pierce’s differences with Dunleavy as “more based on style than substance or policy.”

In other related news, the Alaska Supreme Court upheld the election system voters approved in 2020. The court’s ruling means that the system will go into effect for this year’s elections, including the Aug. 16 gubernatorial primary. Under the system, every candidate will appear on the same primary ballot, regardless of their partisan affiliation. The top four candidates will advance to the general election, in which voters can rank their preferences rather than voting for a single candidate. Click here for details on how ranked-choice voting works.

Alaska is the first state to adopt top-four primaries and the second to adopt ranked-choice voting for statewide elections, after Maine.

The primaries are scheduled for June 28.

Pillen has served on the University of Nebraska Board of Regents since 2013. Ricketts said, “Whether creating Nebraska jobs, fighting Critical Race Theory at the University system, or supporting his fellow ag producers, Jim has consistently shown he’s a leader of principle and integrity.”

Herbster owns a manufacturing company and the cattle ranch Herbster Angus Farms. Trump said Herbster “has been a tremendous supporter of America First and Make America Great Again, right from the beginning.”

Ricketts said, “While I agree with President Trump on many things, I strongly disagree that Charles Herbster is qualified to be our next governor — from his choice to headquarter his business in Missouri to his support of tax policy that would tax medical services, prescriptions, and food, as well as more than doubling our sale tax.”

Herbster said, “It is disappointing to me that Governor Ricketts is supporting a candidate who has a weak record on illegal immigration, who failed to stop Critical Race Theory from seeping into public universities and then voted to fund it with taxpayer dollars, and who has admitted to polluting our most precious resource, water.”

Several other candidates have filed for the primary so far. 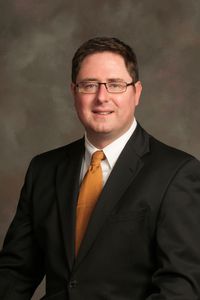 In October, a federal grand jury indicted Fortenberry on one count of scheming to falsify and conceal material facts and two counts of making false statements to federal investigators. Fortenberry pleaded not guilty.

Nebraska’s primary is scheduled for May 10.