Welcome to the Tuesday, March 8, Brew.

The chart below shows the overall net changes in state legislative seats during the first midterm election of each presidency. Partisan totals represent those as a result of regularly-scheduled elections. The totals do not include any special elections or other changes that may occur between elections. Some presidencies were combined in the event of a resignation or death in office.

Over the past few weeks, we’ve looked at a lot of statewide races, but let’s shift gears and take a look at a local race we are watching closely this year.

Milwaukee, Wisconsin, is holding a special general election for mayor on April 5, which was called after Mayor Tom Barrett (D) resigned on Dec. 22, 2021, to become the U.S. ambassador to Luxembourg.

Voters will decide between Acting Mayor Cavalier Johnson and Common Councilman Robert Donovan, both of whom advanced from a seven-way primary on Feb.15 with 42% and 22% of the vote, respectively.

Wisconsin Public Radio’s Corrinne Hess wrote that the special election “could mean a historic change for Milwaukee. Wisconsin’s largest city could have its first elected Black mayor, or with Donovan, have a conservative leader for the first time.”

Both candidates have served on Milwaukee’s Common Council.

Johnson was first elected to the council in 2016. In 2020, council members elected him as council president. Upon Barrett’s resignation, Johnson, as president, also became acting mayor. Donovan served on the council from 2000 until his retirement in 2020. Barrett defeated Donovan in the 2016 mayoral election 70%-30%.

Public safety has played a central role in the race.

Johnson says his public safety plan is comprehensive and includes measures to prevent violence. Johnson said he led an effort to secure funds for 200 additional police officers while on the council.

Donovan highlighted his 20 years on the Common Council and his past chairmanship of the city’s Public Safety Committee and Anti-Graffiti Policy Committee. Donovan said his public safety plan would increase police staffing and foot and bicycle patrols.

Thirteen Nebraska state Senate districts, 54% of the total holding elections this year, are open, meaning no incumbent is running for re-election. This guarantees that newcomers to the legislature will represent those districts next year. It is also the largest number of open districts since 2014 when 17 incumbents were term-limited.

The filing deadline for candidates running for state and federal office in 2022 in Nebraska was Feb. 15, 2022. In the state’s unicameral legislature, elections will take place in 24 of the 49 Senate districts.

Nebraska is one of 15 states with term limits for its state legislators. Senators are limited to two consecutive four-year terms. In 2022, two outgoing legislators are retiring while the remaining 11 cannot seek re-election due to term limits. 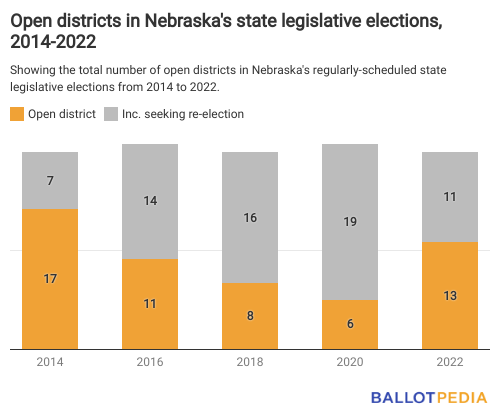 Republicans currently control the Senate representing 32 districts to Democrats’ 17. Nebraska’s state legislative primaries are the fourth in the country, scheduled for May 10.