Over the past few months, we’ve brought you deep dives into some of the primaries we are watching closely this election cycle. Most of them have been for Congress or governors. Today, we are shifting gears and looking at a state board of education election in western Nebraska.

Three candidates are running in the top-two primary election for Nebraska State Board of Education District 7 on May 10: incumbent Robin Stevens, Pat Moore, and Elizabeth Tegtmeier. While this race is officially nonpartisan, all three candidates are registered Republicans.

A March 2021 proposal that would have recommended K-12 health education standards sits at the center of this race. This proposal, written by an education department advisory group, would have included teaching all students about gender identity and stereotypes. High school students would have also been taught about homophobia, transphobia, and sexual assault.

A second draft released in July 2021 eliminated several references to gender and sexuality. In September, the board voted to pause the process of developing these standards. Currently, local districts establish their own standards.

Supporters of the draft included the Women’s Fund of Omaha and OutNebraska, an LGBTQ+ advocacy group. Opponents included Gov. Pete Ricketts (R) and 28 members of the Nebraska Senate. Ricketts and at least 14 state senators have endorsed Tegtmeier in the primary.

Stevens, who was first elected after running unopposed in 2018, said the board needed to re-establish public trust. “We didn’t do a good job early on of getting the health standards out to people, it hurt us and it hurt us badly,” Stevens said.

At a campaign event, Tegtmeier said she chose to run after hearing a state senator speak about the proposed standards, saying, “I didn’t want to get 10 years down the road and have to tell my kids that I thought about doing something but just didn’t do it.”

District 7 is one of eight on the Nebraska State Board of Education and one of four holding elections this year. The board is an executive agency in the Nebraska state government, responsible for managing the state’s public scools.The board also appoints and works with the state commissioner of education to oversee and evaluate the state school program.

54.3% of the nation’s state legislators are Republicans

Ballotpedia’s March count of the 7,383 state legislators found that 54.2% are Republicans and 44.4% are Democrats. Fun fact: at least one state is adding new legislative seats this cycle. More on that to come later this week.

Republicans control 62 of the country’s 99 legislative chambers, while Democrats control 36. The Alaska House of Representatives is the only chamber controlled by a multipartisan, power-sharing coalition.

Since last month, Republicans have seen a net decrease of four House seats while their number of state senators remained the same. Democrats gained three Senate and four House seats during that time.

Every U.S. House district in California has a contested primary this year

For the first time since at least 2014, every U.S. House district in California will have a contested primary election this year. In California, a primary is contested if more than two candidates file to run. That’s a key takeaway from our ongoing analysis of primary election competitiveness nationwide this election cycle. 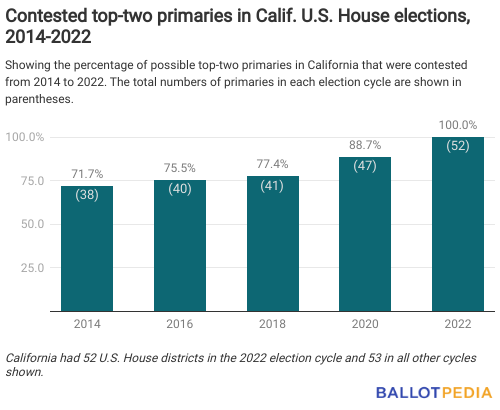 California’s primary elections are scheduled for June 7. Under the state’s top-two primary system, all candidates are listed on the same ballot regardless of party affiliation. The top two vote-getters will advance to the general election.