Welcome to The Heart of the Primaries, Democratic Edition

In this issue: Fetterman has big lead in Pennsylvania Senate primary and an update on the 2024 presidential primary calendar

Nebraska and West Virginia held primaries on Tuesday. Nebraska’s 2nd Congressional District was our only battleground Democratic primary of the night.

There were no incumbent Democratic members of Congress from Nebraska or West Virginia with elections on Tuesday.

All three incumbent Democrats seeking re-election to the Nebraska Senate will advance to the general election. Since 2010, only one incumbent state senator has lost in a contested primary in Nebraska: Sen. Nicole Fox (R) in 2016. Ricketts appointed Fox to the seat in 2015 after the Democratic incumbent resigned.

In 2020, no Democratic incumbents lost state legislative primaries in West Virginia. One did in 2018.

The following table shows data from 15 states for which we have post-filing deadline information and from four states—Indiana, Nebraska, Texas, and West Virginia—where state legislative primaries have taken place.

In its endorsement of Fetterman, The Philadelphia Tribune wrote:

On the issues, the Democratic candidates aren’t that far apart, but Fetterman has demonstrated through his campaign that he is the candidate with the broadest appeal across the state and is the best candidate to represent the Democratic Party’s agenda.

His background as the former mayor of Braddock, a small industrial town in Allegheny County with a large percentage of African Americans in Allegheny County, helps bring a diversity of experience that allows him to connect with residents from small rural communities to Philadelphia, the state’s largest city.

The Philadelphia Inquirer editorial board wrote of Lamb:

Pennsylvanians deserve a senator who is more than just a plus-one vote for the Democratic caucus in the Senate; it’s crucial that voters elect a candidate who would add value by representing the commonwealth. Based on his history of winning extremely competitive general elections, his familiarity with Congress from his time in the House of Representatives, and his thoughtfulness on tough policy questions, we endorse Conor Lamb.

The latest Franklin & Marshall College poll from April 20 to May 1 showed Fetterman with 53% support, Lamb with 14%, and Malcolm Kenyatta with 4%. Twenty-two percent were undecided. The margin of error was +/- 6.6 percentage points. The college’s last poll, from March 30 to April 10, showed Fetterman ahead of Lamb 41%-17%.

The only other independent pollster in the race is Emerson College. A poll from the end of March showed Fetterman ahead of Lamb 33%-10%.

Differences between Iowa’s Democratic Senate candidates on Ukraine and healthcare were on display both in a May 7 debate and in a new ad from candidate Michael Franken.

All three candidates in the race—Abby Finkenauer, Franken, and Glenn Hurst—participated in the debate. According to KCRG’s Mollie Swayne, “One topic where there was a significant difference of opinion was on sending American troops to aid Ukraine. Finkenauer and Hurst said there was no point at which to do so. Franken said yes, if Vladimir Putin used a nuclear weapon.”

You can watch the debate here.

Franken, a retired U.S. Navy vice admiral, released his second ad on May 3. Franken said, “I’m running for the Senate to take on the big fights, from challenging drug and insurance companies with ‘Medicare for All’ to standing up for the environment, women’s rights, and democracy at home and abroad.”

Finkenauer’s campaign website didn’t include a section on healthcare policy as of May 11. The website emphasizes her support for 12-year congressional term limits and says, “In Congress she built a reputation as someone who would work with anyone in either party to get things done, including funding the Children’s Health Insurance Program, strengthening Iowa’s flood prevention infrastructure and securing needed resources for our rural communities.” Finkenauer represented Iowa’s 1st Congressional District from 2019 to 2021 and was a member of the state House from 2015 to 2019.

Hurst is a physician, a member of the Minden City Council, and chairman of the Iowa Democratic Party’s Rural Caucus. Hurst calls himself “the only progressive in this race” and said, “I’m a Green New Deal Democrat. I’m Medicare for all Democrat. I align more closely with an Elizabeth Warren than a Pete Buttigieg.”

The primary is on June 7. Republican incumbent Chuck Grassley is running for re-election.

An update on the 2024 presidential primary calendar: 18 states apply for early spot

We wrote in March that the Democratic National Committee’s (DNC) Rules and Bylaws Committee discussed changing the election calendar ahead of the 2024 presidential primaries. In April, the committee approved a plan to choose up to five states to hold their nominating contests before the first Tuesday in March 2024. The deadline for states to submit letters of intent to apply for an early spot was May 6.

According to CBS News:

The committee will consider three main criteria for selecting the early states in 2024: diversity, competitiveness and feasibility. Diversity, according to the resolution, includes weighing racial, ethnic, geographic and economic diversity, as well as union representation.

National Democrats will also consider how competitive states are in the general election. Among the feasibility requirements that the committee will examine are whether states can move their contest into the early window, if they can run a “fair, transparent and inclusive nominating process” and the logistical requirements and cost of campaigning in that state.

Iowa has held the nation’s first presidential nominating contest since 1972. See our story from March for more on the debate around Iowa’s first-in-the-nation status. The DNC’s decision on early-contest states is expected in July.

Percentage of each congressional caucus not seeking re-election

Fifty-five members of Congress are not running for re-election in 2022, including 33 Democrats and 22 Republicans. For Democrats, this is a larger percentage of the party’s House and Senate caucuses to retire in one cycle—12.2%—than in any cycle dating back to 2014. For Republicans, this represents 8.4% of the party’s caucuses.

The highest recent percentage of Republicans retiring was in 2018, when 12.6% of the party’s caucus—37 members—didn’t run for re-election. That year, Republicans gained two Senate seats and lost 35 House districts.

The lowest recent percentage of Democrats retiring was in 2020, when 10 members—3.6% of the caucus—didn’t run. Democrats gained three Senate seats and lost 10 House districts.

We’ve crunched some numbers to see how competitive the primaries will be compared to recent election cycles. 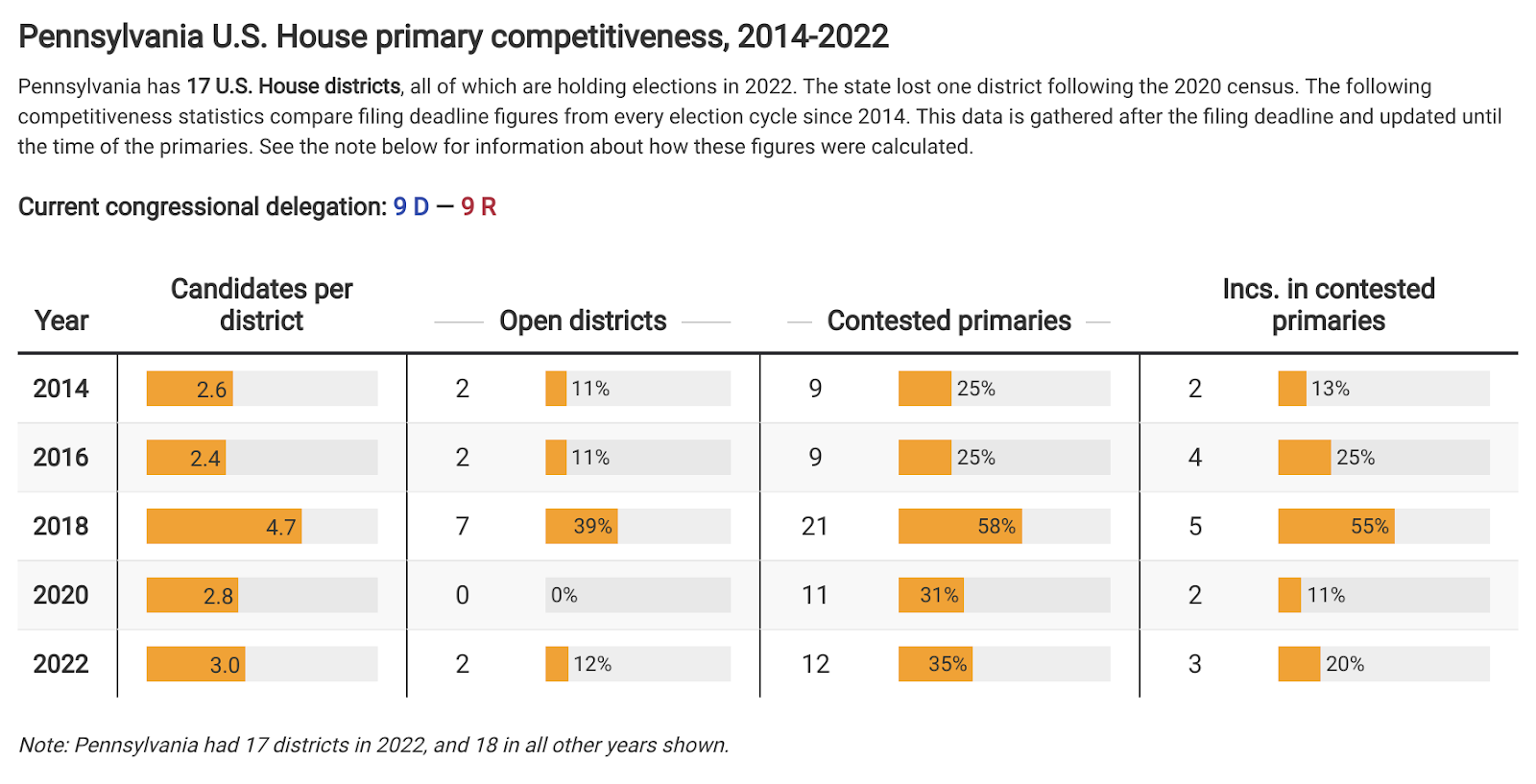