The numbers for 2022 may change depending on the results of 10 uncalled primary elections featuring incumbents in West Virginia and the outcomes of three primary runoffs in Texas. 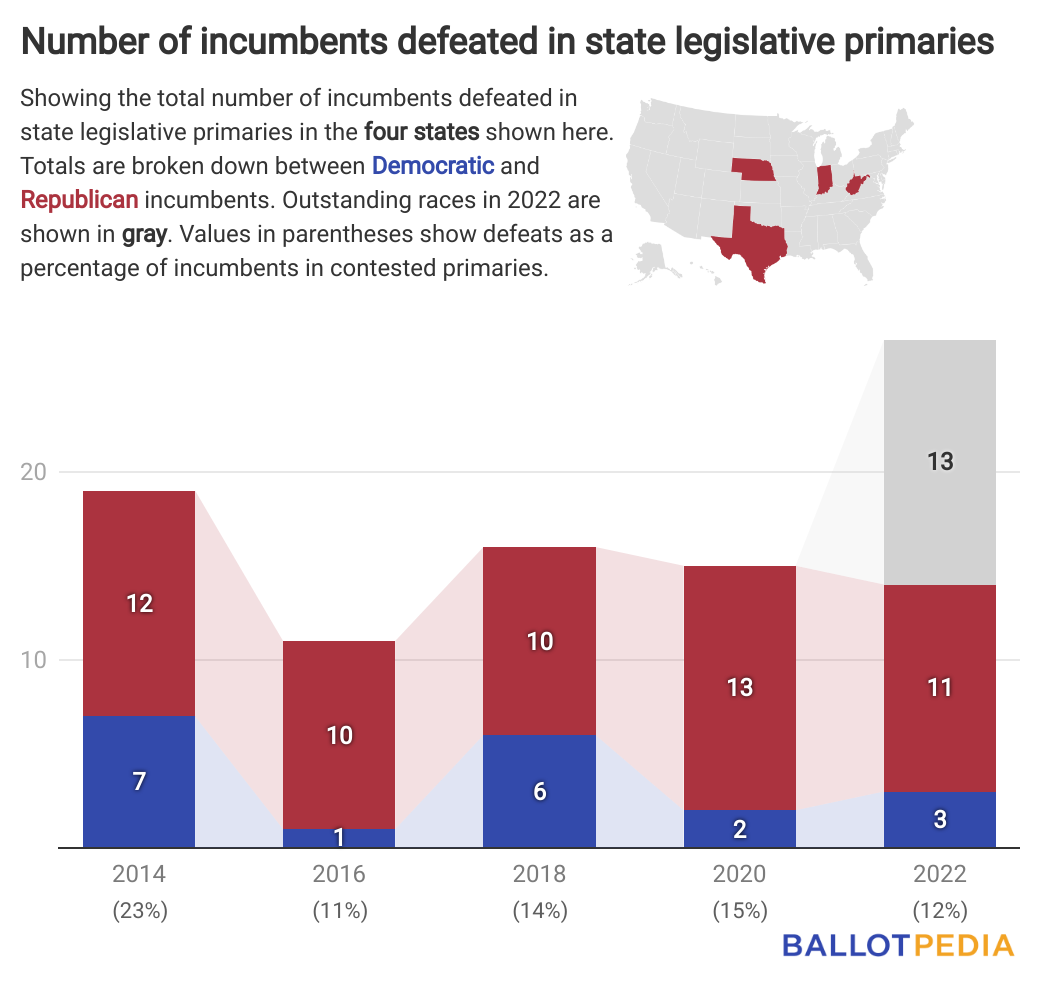 Four states have held state legislative primaries for far this election cycle: Indiana, Nebraska, Texas, and West Virginia, all of which have Republican trifectas. Across those four states, there are 477 seats up for election, 8% of the nationwide total.

Six of the primary defeats this year were guaranteed due to redistricting. When states redraw legislative lines, incumbents can oftentimes end up in a new district with other incumbents leading to incumbent v. incumbent primaries or general elections.

You can view a full list of defeated incumbents and defeat totals from previous years using the link below.

Five states are holding statewide primaries for federal and state offices on May 17: Idaho, Kentucky, North Carolina, Oregon, and Pennsylvania. Today, let’s take a closer look at Oregon, the races on the ballot and how their primaries work.

U.S. Sen. Ron Wyden (D) is running in a contested primary against two challengers with seven candidates seeking the Republican nomination. Wyden was first elected in a 1996 special election and has been re-elected four times.

Oregon is also holding elections for its six congressional districts. Four of the state’s five U.S. House members—three Democrats and one Republican—are seeking re-election and will all face contested primaries. One incumbent—U.S. Rep. Peter DeFazio (D)—is retiring. There is also an open race in the state’s newly-created 6th District, which Oregon gained following redistricting. Nine Democrats and seven Republicans are seeking their respective parties’ nominations there.

The largest race by number of candidates is for the state’s open governorship. Gov. Kate Brown (D) is term-limited. Fifteen Democrats and 19 Republicans are in the running. There are also seven candidates running for labor commissioner.

All 60 districts in the state House and 15 of the 30 Senate districts will be holding elections. There will also be a special primary election in Senate District 18. Democrats currently hold a 37-23 majority in the House and an 18-11-1 majority in the Senate. There are more contested state legislative primaries in Oregon this year than at any point since 2014. This is also the first time since then that there are more Republican primaries than those for Democrats.

Oregon is using partisan primaries in all of its races apart from the race for labor commissioner. In partisan primaries, candidates from the same party compete against one another to win their party’s nomination. The labor commissioner race is nonpartisan and uses top-two primaries instead, where every candidate runs and the top-two vote-getters advance to the general election.

In Oregon, candidates can advance from a primary with a plurality, rather than a majority, of the vote. The state does not hold runoff elections. This means the candidate with the most votes—even if less than 50% of the total votes cast—advances. This is especially pronounced in primaries with large numbers of candidates like those for the governorship and the 6th Congressional District.

These primaries are not the final step in completing the state’s general election ballot, which might also include third-party and nonaffiliated candidates.

Unlike the major parties, third parties, which include the Independent, Libertarian, Pacific Green, and Progressive Parties, use conventions or other nominating processes to pick their candidates for the general election. Additionally, the filing deadline for nonaffiliated candidates is Aug. 30.

If you have primaries coming up, use Ballotpedia’s Sample Ballot Lookup to see what’s on your ballot and bring your choices to the polls with our My Vote app!

#FridayTrivia: What was the turnout in Texas’ statewide constitutional amendment vote on May 7?

What was the turnout in Texas’ statewide constitutional amendment vote on May 7?