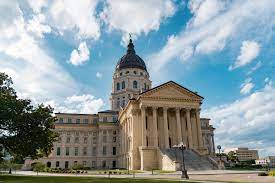 On May 18, the Kansas Supreme Court overturned a district court’s ruling that found that the state’s enacted congressional district boundaries were unconstitutional. In a two-page order, Justice Caleb Stegall wrote for the court, “A majority of the court holds that, on the record before us, plaintiffs have not prevailed on their claims that Substitute for Senate Bill 355 violates the Kansas Constitution.”

Wyandotte County District Court Judge Bill Klapper had struck down Kansas’ enacted congressional map on April 25. Klapper’s ruling stated, “The Court has no difficulty finding, as a factual matter, that Ad Astra 2 is an intentional, effective pro-Republican gerrymander that systemically dilutes the votes of Democratic Kansans.” His opinion also said that the state’s new district boundaries “intentionally and effectively dilutes minority votes in violation of the Kansas Constitution’s guarantee of equal protection.”

Kansas was apportioned four seats in the U.S. House of Representatives after the 2020 census, the same number it received after the 2010 census.

Andrew Bahl of the Topeka Capital-Journal wrote in February 2022 that the “maps were hotly contested, largely for the decision to split Wyandotte County and put part of the Kansas City, Kan., area in the 2nd Congressional District, a move that endangers the state’s lone Democrat in Congress, U.S. Rep. Sharice Davids, and, Democrats argue, unfairly divides minority communities.”

Stegall was first appointed to the Kansas Supreme Court by Gov. Sam Brownback (R) in 2014. He won a full six-year term in a retention election in 2016, receiving 71% support.

Klapper was first appointed to the Wyandotte County District Court by Gov. Sam Brownback (R) in 2013. He ran unopposed in both the Democratic primary and general elections in both 2014 and 2018.

The filing deadline for ballot-qualified parties in Kansas is June 1 and primaries are scheduled for Aug. 2.