Welcome to the Thursday, June 2, Brew.

A top-four special primary is just around the corner in Alaska on June 11, 2022. This is the first top-four congressional primary in U.S. history. A special election for Alaska’s At-Large Congressional District in the U.S. House will take place in 2022. Former incumbent Rep. Don Young (R) died on March 18, 2022.

All candidates will appear on the same ballot with their affiliations listed next to their names. The four candidates with the most votes will advance to the general election, which will use ranked-choice voting.

Young was first elected as Alaska’s U.S. representative in 1973 when he defeated Emil Notti (D) in a special election. Notti is running in the 2022 special primary election. Young also ran for the House in 1972, when Nick Begich Sr. (D) defeated him. Begich Sr. is Begich III’s grandfather.

Here is a timeline for each primary and general election in 2022:

A look at California’s June 7 primaries

California is one of seven states holding statewide primaries on June 7. Let’s take a look at what’s on the ballot this year.

California voters will elect a member to one of the state’s two U.S. Senate seats and all 52 of its U.S. House seats. Sen. Alex Padilla (D), who was appointed to the chamber following Kamala Harris’ (D) resignation to serve as vice president, is running for a full term. A special election for the seat is also taking place on the same dates; the winner of the special election will serve the remaining portion of Harris’ term.

These are the first U.S. House elections taking place in California under new district lines adopted following the 2020 census, which resulted in California losing one House seat. Democrats hold 42 of California’s U.S. House seats to Republicans’ 10 with one seat vacant.

Five members—all Democrats—are not running for re-election, leaving five seats open because an incumbent is not running. California has top-two primaries, where all candidates for a particular office appear on the same ballot regardless of partisan affiliation and the top two finishers advance to the general election. All 52 U.S. House primaries in California are contested, meaning there are three or more candidates running for the two general election spots.

There are eight statewide executive offices as well as four seats on the State Board of Equalization up for election this year. Seven of the eight statewide offices (all but superintendent of public instruction) are up for partisan election, with six of the seven races featuring a Democratic incumbent running for re-election.

The Democratic incumbents running for re-election include Gov. Gavin Newsom (D), who was the subject of a recall election held in September 2021. Voters retained Newsom 62% to 38%. Other executives running for re-election include Attorney General Rob Bonta (D) and Secretary of State Shirley Weber (D). The only statewide partisan office without an incumbent running this year is the California Controller; incumbent Betty Yee (D) was ineligible to run due to term limits. 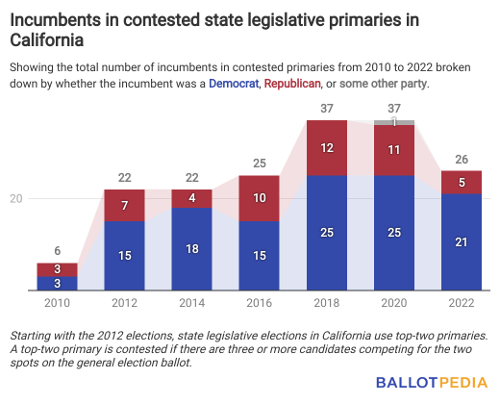 One hundred state legislative seats are up for election in California this year; 20 of the 40 seats in the state Senate and all 80 seats in the state Assembly. This year, 295 candidates filed for the 100 seats; 168 Democrats, 119 Republicans, and eight independent or third-party candidates. These will be the first state legislative elections conducted under new district lines following the 2020 census.

There are 31 incumbents—20 Democrats, 10 Republicans, and one independent—not running for re-election this year, seven of whom were term-limited state senators. There are also three districts, all in the state assembly, where two incumbents are running against one another.

Of the 69 incumbents who are seeking re-election, 26 (21 Democrats and five Republicans) face contested primaries. This is down from 37 incumbents each in 2020 and 2018 but up from earlier cycles. One reason for this decrease is an increase in the number of open districts; the 34 open districts in this year’s legislative elections is the largest number since 2012.

Ballotpedia’s Candidate Connection survey asks candidates for federal, state, and local office to share what motivates them on a personal and political level. Click here to see prior races featured.

As of May 31, 2022, we’re covering 115 races with final candidate lists in which all candidates have completed the survey. Seventeen races reached that milestone in the past week.

Noah Arbit, Ken Ferguson, and James Sklar are the three candidates running for the Democratic nomination for District 20 in the Michigan House of Representatives. The district was moved north and east from Northville Township to West Bloomfield Township in the post-2020 round of redistricting. The new District 20 does not overlap the existing district. Incumbent Matt Koleszar (D) is running for re-election in the new District 22, which overlaps the old District 20.

Here’s how all three answered the question, “Who are you? Tell us about yourself.”

“Growing up in West Bloomfield, I was steeped in the teachings of my Jewish faith, including the phrase “justice, justice shall you pursue.” Those words were a lifeline for me when, at 18 years old, I found myself in the courtroom testifying against the sexual predator who had assaulted me and many others.

I continued my pursuit of justice in politics, joining Governor Whitmer’s team to advocate for policies to help Oakland County. After the Pittsburgh synagogue attack, I founded the Michigan Democratic Jewish Caucus to empower Jews to take on hate and extremism in the political arena. I was then appointed Director of Communications for the Oakland County Prosecutor’s Office, spearheading the first-ever Racial Justice Advisory Council and establishing a program to assist in prosecuting hate crimes targeting LGBTQ+ people.

Each of these roles—as well as my battles with depression, ADHD, and my journey to self-acceptance as a gay man—drive my passion to address issues like Michigan’s mental health crisis and rising hate crimes.

I truly never imagined running for office, but I was tired of watching my hometown treated like an afterthought in Lansing. West Bloomfield, Commerce, and the Lakes deserve a passionate, forward-thinking, relentless leader who exhausts every path to find innovative, common-sense solutions. A leader who shows up, works tirelessly, and fights for us with faith and fidelity. That’s the kind of person I am. That’s the kind of representative I’ll be.”

“I’m a lifelong Michigander, Army veteran, public school teacher, husband, and parent. I grew up in Sterling Heights with my parents and two siblings in a modest home that embodied hard work and family values. When I was ten, my father passed away, which made it challenging for my family. Thanks to my mother’s dedication, we survived, kept the house and made ends meet. These experiences shaped my desire to help others succeed when dealt difficult circumstances in life.

Serving others has always been an important part of my life. I joined the Army and served honorably during Desert Storm with the Military Police. Today, I am a teacher for children who are blind or have low vision, and this has been my career for more than two decades. I’m a proud union member and prior leader for my MEA and AFT locals. In 2016, I was elected to the West Bloomfield School Board and am currently the board’s treasurer. I reside in West Bloomfield with my wife and two wonderful children.”

“I am a hardworking, laser-focused, and goal-oriented person who never gives up. I have worked three years in the state legislature, interned at the White House under the Obama Administration, and I have my J.D. from Michigan State College of Law. While working in the state legislature I have witnessed everyone’s recent struggles and how Michigan needs to implement innovative policies to meet those struggles. I am worried that the opportunities I had to succeed aren’t there anymore. We need to work harder to keep our talent in Michigan and invest in the future generations of Michigan leaders. My passion for Michigan and my experiences are why I believe I will be an effective voice in the state house.”

Some other details about the 115 races where all candidates have completed the survey: