Welcome to the Friday, June 24, Brew.

A decade-high 23% of state legislative seats up for election this year are open, meaning no incumbents are running. This is based on an analysis of 30 states where Ballotpedia has collected post-filing deadline data in 2022.

This elevated rate of open seats is similar to the last post-redistricting cycle, 2012, in which 22% of seats up for election in these 30 states were open.

Open seats typically occur when an incumbent leaves office. But in post-redistricting cycles it is also common to see open seats when incumbents are drawn into other districts, leaving their old districts open 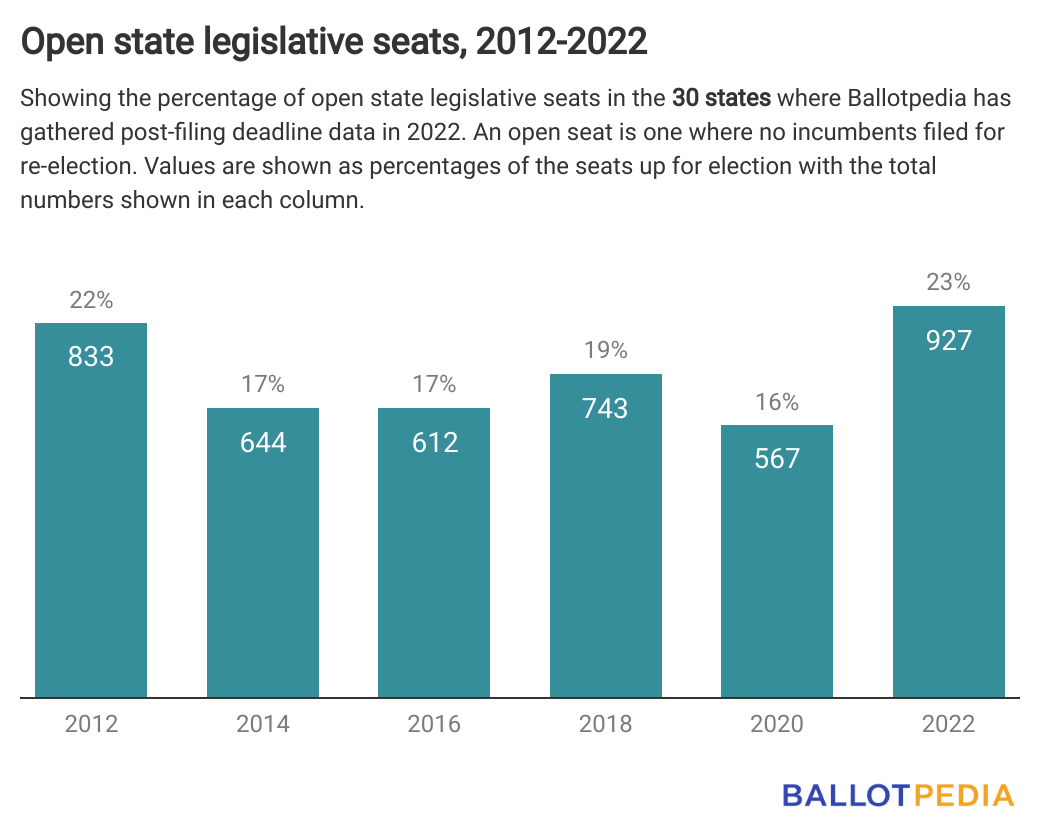 When compared to 2012, these three states have the largest increase in the number of open seats this year:

These three states have the largest decrease in the number of open seats this year compared to 2012:

Open seats can alter the makeup of state legislatures both in terms of politics and personality. Since no incumbents are present, newcomers to the chamber are guaranteed to win these seats. Open seats represent a baseline, but the number of newcomers can increase if incumbents lose in primaries or general elections.

Of these four, Arizona, Colorado, and Maine all have term limit laws, which can require incumbents to leave office after serving a maximum number of years. Maine had the largest number of term-limited incumbents in this group with 46, followed by Colorado with 13, and Arizona with nine.

In three states—Utah, Indiana, and South Carolina—less than 10% of the state legislature is guaranteed to newcomers based on open seats. None of these states have term limit laws.

The latest on ballot measure certifications

We’ve got another update on this year’s statewide ballot measure certifications! The last time we checked in on certified measures, on June 8, we reported 103 statewide measures certified for the 2022 ballot in 34 states. That number is now up to 108 measures in 35 states, 16 less than the average number certified at this point in other even-numbered years from 2010 to 2020.

Here’s an update on the most recent news from the world of ballot measures:

Three new measures in two states were certified for the ballot last week, meaning voters will have a chance to weigh in on them in November:

Supporters have submitted signatures that are pending verification for nine initiatives in five states:

From 2010 to 2020, the average number of statewide ballot measures certified in an even-numbered year was 164. By this time during those years, an average of 124 statewide measures had been certified for the ballot.

Use the link below to read more about this year’s statewide ballot measures. And to keep up with all things ballot measures, click here to subscribe to the State Ballot Measure Monthly!

With this week’s quiet primary scheduled behind us, we’ve got a busy Tuesday coming up on June 28 with five states holding primaries. Today, we’re taking a closer look at one of those primaries in particular: Illinois’ Republican gubernatorial race.

Six candidates are running for the Republican nod for governor of Illinois. State Sen. Darren Bailey and Aurora Mayor Richard Irvin have led the field in fundraising and media coverage. Here’s a bit more on those candidates :

Both candidates have also emphasized their opposition to incumbent Gov. J.B. Pritzker (D) who is seeking a second term.

Donations and campaign ads have been a point of focus in the race. The Chicago Sun-Times’ Tina Sfondeles wrote, “Rather than on debate stages, the race is largely being played out via millions of dollars worth of competing TV campaign ads.”

As of May 22, Bailey and Irvin had both received noteworthy individual campaign contributions, including $9 million to Bailey from businessman Richard Uihlein and $50 million to Irvin from hedge fund manager Ken Griffin.

Recent polling has shown Bailey in the lead followed by Irvin but with large percentages of undecided voters. Averages from three polls since the start of May show Bailey with 30% support followed by Irvin with 20%. Collectively, all other candidates have received 23% support and 27% remain undecided.

In Illinois, a candidate can win a primary with a plurality, rather than a majority, of the vote, meaning the winner is the candidate with the most votes regardless of whether he or she crosses the 50% threshold.

Illinois has had a Democratic governor since Pritzker defeated then-incumbent Gov. Bruce Rauner (R) 55-39% in 2018. In that race, the two candidates contributed a total of $240 million to their own campaigns, $172 million for Pritzker and $68 million for Rauner.

Two race forecasters rate the 2022 general election as Solid Democratic and one gives it a Likely Democratic rating.