Welcome to the Thursday, July 21, Brew.

113 statewide ballot measures certified for the ballot, including new firearms measure in Oregon

As of July 20, 113 statewide measures have been certified for the ballot in 35 states, 27 less than the average number certified at this point in other even-numbered years from 2010 to 2020.

Here’s an update on the latest ballot measure activity:

One new measure was certified for the ballot last week: Oregon Changes to Firearm Ownership and Purchase Requirements Initiative.

The initiative (#17) would enact a law outlining a procedure to apply for a permit to purchase a firearm. Local law enforcement would issue permits. Applicants would need to pay a fee, submit a photo ID, be fingerprinted, complete approved safety training, pass a criminal background check, and not be prohibited from possessing firearms. Law enforcement would be able to deny a permit to an applicant believed to be a danger to oneself or others. The initiative would also criminalize the manufacture, importation, possession, use, purchase, sale, or otherwise transferring of ammunition magazines capable of holding more than 10 rounds.

Existing law requires a seller or transferor to request a background check before firearm purchase.

Oregon voters will be deciding on three other ballot measures this fall. The state Legislature voted to refer an amendment that would add affordable health care as a fundamental right to the Oregon Constitution and an amendment that would repeal language allowing slavery or involuntary servitude as criminal punishment. The third measure is a ballot initiative that would disqualify state legislators from re-election for unexcused legislative absenteeism, such as for legislative walkouts.

Signatures have been submitted and are pending verification for another 20 initiatives in 11 states: 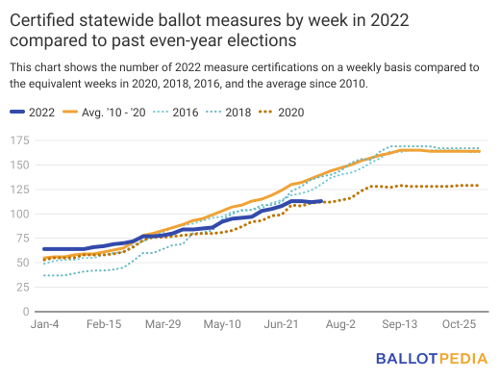 Dan Cox won the Republican nomination for governor of Maryland in Tuesday’s primary. As of writing, the Democratic primary remained too close to call, with Wes Moore and Tom Perez leading the 10-candidate field.

As of writing, Cox had 56% of the vote, followed by Kelly Schulz with 40%. Cox, who serves in the state House of Delegates and is an attorney, was endorsed by former President Donald Trump (R). Schulz, a former state secretary of commerce, was endorsed by current Gov. Larry Hogan (R), who is term-limited.

According to The Washington Post, it could be several days until a winner can be declared in the Democratic primary. Voters in the state requested a record number of mail ballots—approximately 500,000. Election officials may not begin counting mail ballots until July 21 at 10 a.m., according to state law. Election officials in the state estimate that some counties may finish counting these mail-in ballots by July 29, while other counties may not finish until early August.

Wes Moore worked in the finance sector and as CEO of the Robin Hood Foundation, in addition to writing books about race, equity, and opportunity in America. Tom Perez served as chairman of the Democratic National Committee from 2017 to 2021 and as the U.S. secretary of labor in the Obama administration from 2013 to 2017.

Two election forecasters say the general election leans towards Democrats and a third says they are likely to win.

Across the 27 states that have held primaries, 4.8% of incumbents running for re-election have lost, an elevated level of incumbent losses compared to previous cycles.

These totals include data from Maryland, which held state legislative primaries on July 19. No incumbents have lost in these primaries so far, but 55 races remain uncalled.

Thirty of these 135 incumbent defeats (22%) were guaranteed due to redistricting. When states redraw legislative lines, incumbents can oftentimes end up in a new district with other incumbents leading to incumbent v. incumbent primaries or general elections. Since, in these races, there are more incumbents running than nominations or seats available, at least one incumbent must lose.

Of the 27 states that have held primaries so far, eight have Democratic trifectas, 15 have Republican trifectas, and four have divided governments. Across these 27 states, there are 3,525 seats up for election, 57% of the nationwide total.

The Ohio Supreme Court ruled 4-3 on July 19 that the congressional district boundaries that the Ohio Redistricting Commission adopted on March 2 were unconstitutional. The state’s 2022 primaries took place on May 3 under the overturned boundaries, so the state will again use those boundaries in the November general elections.

The state supreme court directed the Ohio General Assembly to pass a compliant redistricting plan within 30 days. If the general assembly fails to do so, the court ordered the redistricting commission to then adopt a plan within another 30 days. That map would be used for the state’s 2024 congressional elections.

Governor Mike DeWine (R) first signed a new congressional map into law on November 20, 2021, after the state Senate voted to approve it 24-7 and the state House approved it 55-36. On January 14, the Ohio Supreme Court struck down the state’s enacted congressional map and ordered the legislature to redraw it. On February 9, Ohio legislative leaders said they would not draw a new congressional map, meaning responsibility for the new map fell to the Ohio Redistricting Commission. The commission approved redrawn congressional boundaries in a 5-2 vote along party lines.