Welcome to the Monday, July 25, Brew.

What amounts to a wave election in the U.S. House?

All this week, we will be bringing you a Week of Waves to answer the question—”What is a wave election?”—using election data from 1918 through 2016.

Our Wave Elections report analyzed results in all election cycles from Woodrow Wilson’s (D) second midterm in 1918 to Donald Trump’s (R) victory in 2016. We analyzed four sets of elections: U.S. Senate, U.S. House, governorships, and state legislatures. We define a wave as the top fifth (20%) of elections from 1918-2016 in terms of losses for the incumbent president’s party.

Under this definition, the president’s party must lose 48 seats in the U.S. House for an election to qualify as a wave. There have been 11 wave elections between 1918 and 2016: four for Democrats and seven for Republicans.

The smallest U.S. House waves were in 1966 and 1974, under the presidents Lyndon Johnson (D) and Gerald Ford (R), respectively. The president’s party lost 48 U.S. House seats during these elections. The largest wave was in 1932, under Herbert Hoover (R), when Republicans lost 97 seats.

For comparison, the median number of U.S. House seats the president’s party lost between 1918 and 2016 was six. The average number of seats lost was about 14.

While some have described 2018 as a wave election for House Democrats, Republicans lost 42 seats compared to the number they held after the 2016 elections. 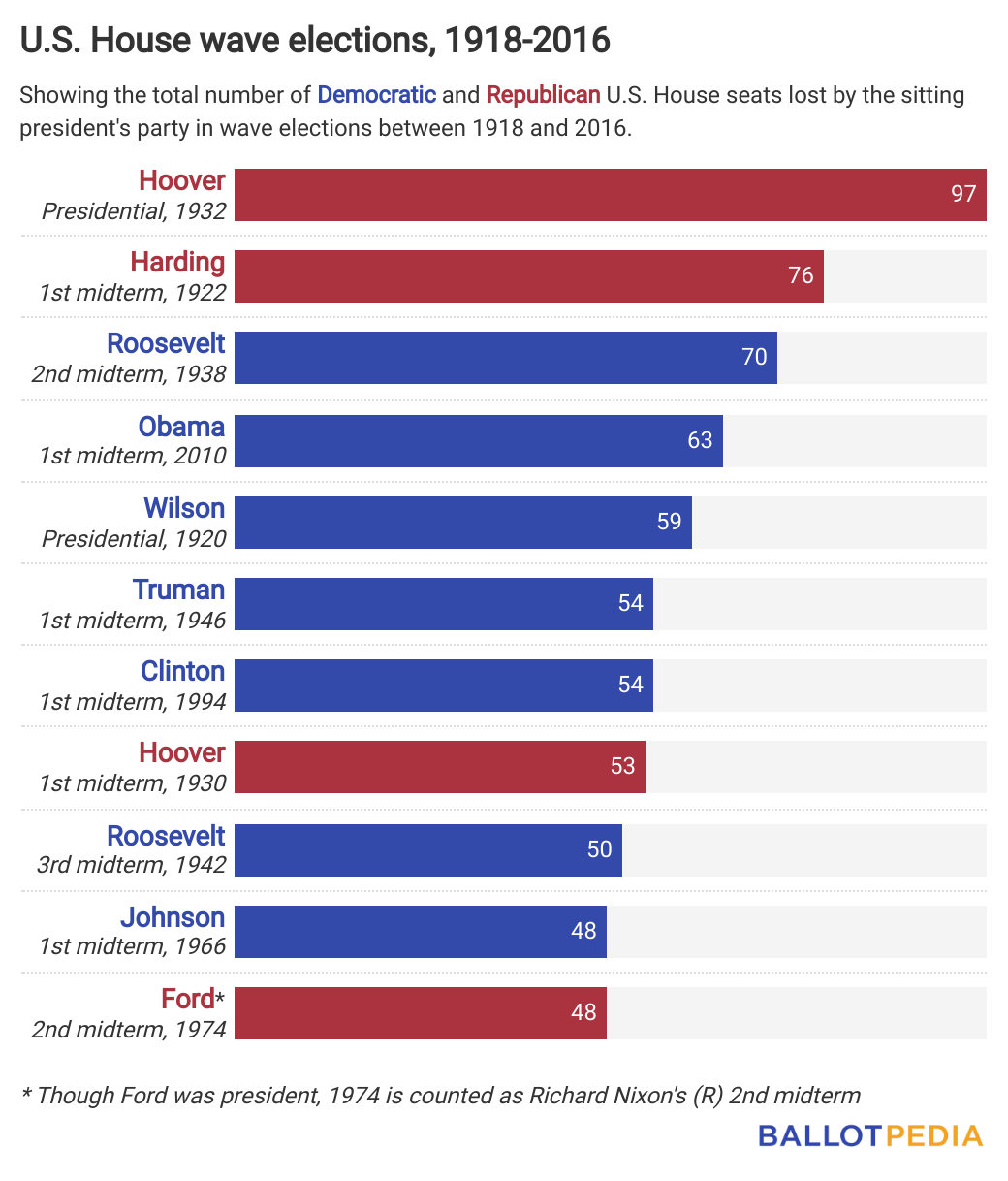 Pat Ryan (D) and Marc Molinaro (R) are running. Former incumbent Antonio Delgado (D) resigned after Gov. Kathy Hochul (D) selected him as lieutenant governor. The winner of the special election will serve the rest of Delgado’s term that ends on January 3, 2023.

The special election is one of two elections for New York’s 19th district in 2022. The other is the regularly scheduled election on November 8.

“The current 19th is a swing district, and the special election has outsized national implications, as it will determine the size of the Democratic majority in the House of Representatives for the remainder of the 117th Congress,” said The Times Union’s Timmy Facciola. “The victor will also gain incumbent status before the November midterm elections, for which both Molinaro and Ryan have declared their candidacies in New York’s newly drawn districts,” Facciola added.

The Democratic Congressional Campaign Committee (DCCC) raised $17.0 million and spent $13.2 million, while the National Republican Congressional Committee (NRCC) raised $16.5 million and spent $5.7 million. The DCCC’s $13.2 million in expenditures is its highest single-month total in the 2022 election cycle. So far in the 2022 election cycle, the DCCC leads in fundraising with $239.5 million to the NRCC’s $215.2 million. At this point in the 2020 cycle, the DCCC had raised $207.8 million, and the NRCC had raised $160.0 million.

This election cycle, the three Republican committees have raised 1.8% more than the three Democratic committees ($636.0 million to $624.5 million). The Republican fundraising advantage is down from 2.7% last month.