Welcome to the Friday, July 29, Brew.

Control of 494 state legislative seats must change nationwide for an election to qualify as a wave.

By this definition, there have been 10 wave elections between 1918 and 2016: six for Democrats and four for Republicans.

The largest wave was in 1932, under Herbert Hoover when Republicans lost 1,022 state legislative seats.

Between 1918 and 2016, the median number of state legislative seats the president’s party lost was 82, and the average number was 169. 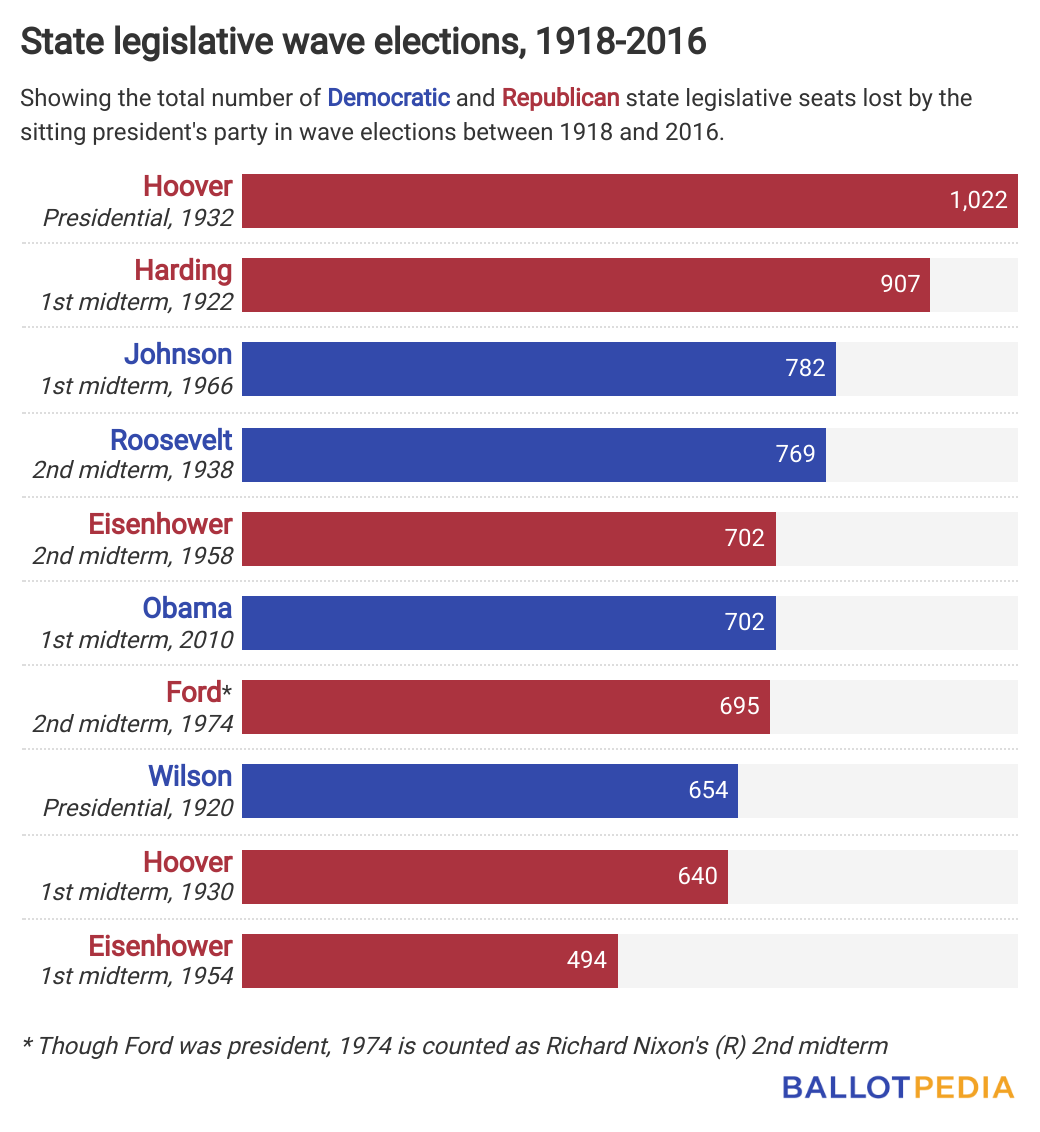 There are some limitations to comparing state legislative seats over time. Unlike statewide elections, like those for governor, state legislative district lines are redrawn every 10 years, which can affect incumbents’ electoral prospects distinct from any sort of backlash against the president’s party.

Additionally, like with gubernatorial races, 15 state legislatures have term limits, which create open seats at a greater frequency than at other levels of government, like the U.S. House. Most states with term limits adopted them in the 1990s, and put them into effect in the early 2000s.

There are 6,166 state legislative seats up for election in 2022. Click here to learn more.

August 2 is the busiest election day left in the current primary cycle. Voters in five states—Arizona, Kansas, Michigan, Missouri, and Washington—will pick their nominees for offices at all levels of government.

Today, let’s look at Missouri, the races on the ballot, and how their primaries work.

Missouri’s U.S. Sen. Roy Blunt (R) is one of six senators not seeking re-election this year. Eleven Democrats and 21 Republicans are running in primaries to fill the open seat.

All 163 seats in the state House and 17 of the 34 seats in the state Senate are also up for election. Thirty-five of the 132 legislators running for re-election (27%) face contested primaries, the largest number over the past five election cycles. While the number of contests increased this year, historically, incumbents in contested primaries have advanced to the general election 92% of the time since 2014.

Missouri has a Republican trifecta, with the party controlling the governorship and both chambers of the legislature: 107-48 in the House and 24-10 in the Senate.

In Missouri, the candidate with the most votes—even if less than 50% of the total votes cast—advances to the general election.

If you have primaries coming up, use Ballotpedia’s Sample Ballot Lookup to see what’s on your ballot and bring your choices to the polls with our My Vote app!

In Memphis, voters will decide one charter amendment regarding term limits. If passed, this measure would increase the number of terms city councilors and the mayor could serve from two to three four-year terms, allowing them to serve a maximum of 12 years in office.

Memphis voters rejected a similar proposal in 2018, with 60% of voters opposing that measure and 40% voting in favor.

Early voting in Memphis and Nashville is already underway and ends on July 30.