Welcome to The Heart of the Primaries, Democratic Edition

In this issue: Michigan’s battleground primary takeaways and Vermont’s U.S. Senators weigh in on House race

Levin is one of 10 House incumbents, and one of four Democrats, who ran for re-election and lost in primaries this year. Two of the other defeated Democratic incumbents lost to fellow incumbents. In 2020, eight incumbents lost primaries, including three Democrats.

Tlaib was first elected to Congress in 2018. Winfrey is Detroit’s city clerk. According to election forecasters, this is a safe Democratic district.

CNN discussed Stevens’ win as a loss for progressives and a win for AIPAC:

Stevens and Levin are both supportive of Israel, but Levin — who is Jewish — has been more willing to criticize its government’s treatment of Palestinians and is the lead sponsor of the Two-State Solution Act.

Progressive Democrats, frequently targeted by AIPAC spending this primary season, have fumed at fellow Democrats for accepting or courting support from the group, which has also contributed to Republican election deniers. AIPAC has defended the practice, arguing that its policy goals need bipartisan support.

J Street, a liberal pro-Israel group that has clashed with AIPAC, tried to boost Levin with a $700,000 July ad buy, but that sum paled in comparison to the millions bundled by AIPAC and more than $4 million spend by UDP.

Al Jazeera‘s Ali Harb wrote about Tlaib’s win in the context of a satellite group supporting one of her opponents and of Tlaib’s 2021 infrastructure bill vote:

US Congresswoman Rashida Tlaib has all but secured re-election after comfortably fending off primary challengers and an advertising campaign by a pro-Israel group.

The American Israel Public Affairs Committee (AIPAC), a lobbying group, has been spending millions of dollars to defeat progressives critical of Israel, but it did not interfere in the Tlaib race.

The congresswoman’s detractors often slam her criticism of Israel as a US ally and question her loyalty to the mainstream Democratic Party and President Joe Biden.

Tlaib was one of six progressive House Democrats to vote against the $1.2 trillion bipartisan infrastructure bill that Biden signed into law last November.

Progressives – and at some point Biden himself – wanted the bill to pass simultaneously with the president’s now-doomed Build Back Better social spending agenda, priced at $1.75 trillion.

Tlaib and her fellow progressives had hoped to use the vote on the infrastructure bill as leverage to convince conservative Democrats to advance the Build Back Better package.

But the congresswoman’s “no” vote on the infrastructure legislation became one of the main points of criticism against her in the primary race.

The figures below were current as of Wednesday morning. Click here for more information on defeated incumbents.

Thirteen state legislative incumbents—six Democrats and seven Republicans—lost in the Aug. 2 primaries in Kansas, Ohio, and Missouri. No incumbents have lost in Arizona, Michigan, or Washington so far, but this will likely change. Eighty-seven House and Senate primaries featuring incumbents—24 Democratic, 33 Republican, and 30 top-two—remain uncalled.

Across the 33 states that have held state legislative primaries so far this year, 156 incumbents, 4.7% of those running for re-election, have lost, continuing an elevated rate of incumbent primary defeats compared to recent election cycles. 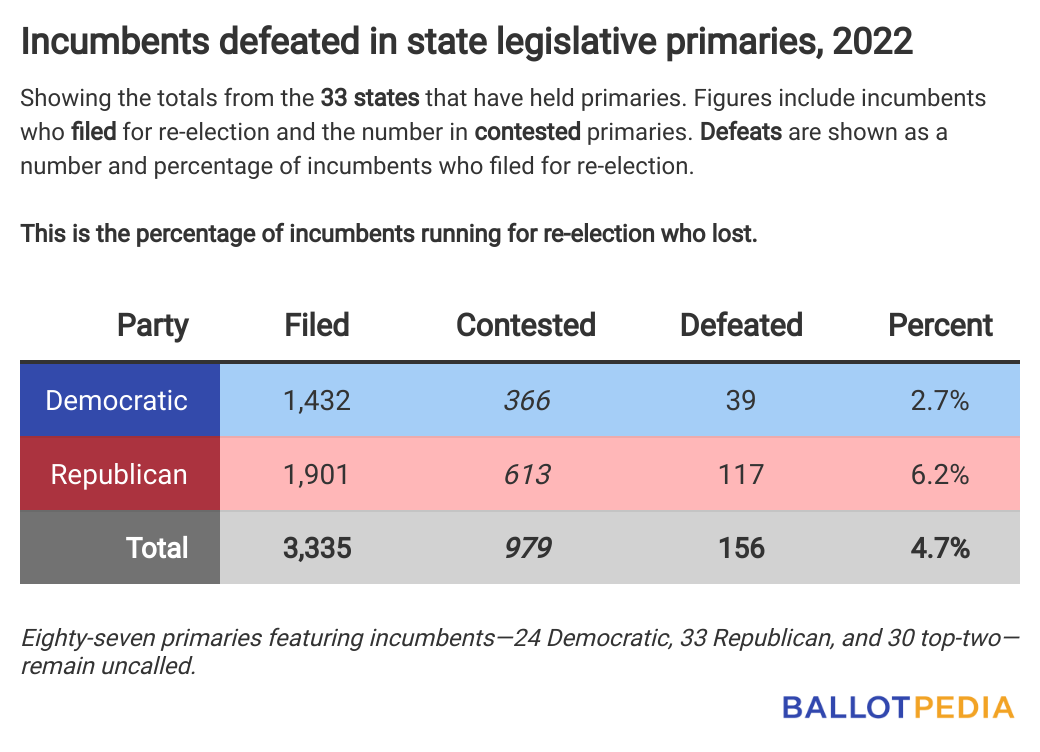 Of the 33 states that have held primaries so far, nine have Democratic trifectas, 18 have Republican trifectas, and six have divided governments. Across these states, there are 4,306 seats up for election, 70% of the nationwide total.

Former state Rep. Tom Nelson ended his campaign on July 25. Nelson said, “It didn’t look like we were in a strong position” and that it “made sense to consolidate the progressive vote.”

Milwaukee Bucks executive Alex Lasry announced his withdrawal on July 27: “After talking with [U.S. Sen.] Tammy [Baldwin (D)] and seeing the data, I think it was clear there was no path forward for us to be able to win. We wanted to make sure we were able to unite and rally our support to ensure we’re spending every second we can to get Ron Johnson out of office.”

State Treasurer Sarah Godlewski ended her campaign on July 29, saying, “I know that we’re better when we all come together. If there is one thing we know about Mandela Barnes is he is no stranger to running statewide.”

Barnes said in a statement, “This week has demonstrated what it looks like when we come together for a goal that is greater than ourselves. We are building a coalition that crosses generations, crosses racial divides and political divides. A coalition that includes farmers, union leaders, teachers, small business owners, and working people all across this state.”

Godlewski’s, Lasry’s, and Nelson’s names will still appear on the Democratic primary ballot due to the timing of their withdrawal.

The primary is on Aug. 9. Incumbent Sen. Ron Johnson (R) is running for a third term. Wisconsin is one of two states President Joe Biden won in 2020 that is holding an election for a Senate seat a Republican holds this year. In the other state—Pennsylvania—Sen. Pat Toomey (R) is not seeking re-election.

The winner of Vermont’s lone U.S. House race in November will become part of the state’s three-member congressional delegation, along with two U.S. senators. Both senators have weighed in on the Democratic primary.

Sen. Bernie Sanders (I-Vt.) endorsed state Sen. Becca Balint in the House primary and appeared at rallies with her in Burlington, Montpelier, and Rutland over the weekend. Sanders told VTDigger, “[I]t’s imperative that we have people in Washington who are prepared to think outside of status quo thinking, who are prepared to stand up to very powerful special interests who dominate the economic and political life of this country. And I think Becca will be one of those people.”

Sen. Patrick Leahy (D-Vt.), who has not made an official endorsement, said he voted early for Lt. Gov. Molly Gray in the House primary: “While I think highly of both of the leading candidates, I voted for Molly Gray because I believe her experience is well suited to the job. … Her work in Congress, her legal training, her deep connections to Vermont communities.”

A recent University of New Hampshire poll showed Balint leading Gray 63% to 21%. The poll’s margin of error was +/- 5 percentage points.

Chase Clifford said, “I really wanted to be able to tell the story that you don’t need to do this with a lot of money and that regular people should be able to do this. … Unfortunately, what is really kind of sick and twisted about electoral politics is if that’s your message, you still need money to be able to share that message.”

Cayetano and Kahele held a joint press conference on July 27 where they called on Green to release certain financial records. Hawaii Public Radio’s Sabrina Bodon wrote, “The pair renewed calls for Green to share records regarding his finances and links to three limited liability companies. They said the LLCs have contributed up to $1 million to Green’s income over the years.”

According to Hawaii News Now, “[M]ost of the allegations they made and questions they raised have been heard before. … Kahele and Cayetano also repeated that Green paid a $1,000 fine over disputed mainland contributions when he ran for lieutenant governor. Even though those facts aren’t new, both say Green hasn’t responded adequately.”

According to Bodon, “Green has said one LLC was used for his income as a doctor, and asserted that other calls of unethical behavior have either been clerical errors or taken out of context.”

In a campaign ad that aired the day of the press conference, Green said, “When campaigns get desperate, sometimes they start attacking instead of talking about the issues that really matter to people. … But you know me. I’m gonna keep talking about building affordable housing, fighting homelessness, and lowering the cost of living.”

Cayetano, Green, and Kahele disagree on the proposed Thirty Meter Telescope project, a plan to construct a $2.65 billion telescope on the summit of the Mauna Kea volcano. Cayetano supports it, Kahele opposes the plans as they stand, and Green expressed disappointment in the handling of the project, saying he supported large projects like the telescope if they were done with respect between cultures.

A poll conducted for the Honolulu Star-Advertiser in mid-July showed Green at 55%, Cayetano at 19%, and Kahele at 16%. The margin of error was +/- 5.6 percentage points.

Seven candidates are running in the primary on Aug. 13.