Welcome to the Tuesday, August 23, Brew.

A look at the Aug. 23 primaries and runoffs

Voters in three states—Florida, New York, and Oklahoma—cast ballots today, Aug. 23, in the last primary until September. Here’s an overview:

And now a look at some of the key races:

In Florida, U.S. Sen. Marco Rubio (R) advanced to the general election without any primary challenges. Democrats will make their pick to decide who will face Rubio in November.

All three states are holding U.S. House primaries or runoffs. Florida gained a district during redistricting, increasing to 28, and New York lost a district, dropping to 26. Oklahoma remained the same at five, though only the Republican contest in the state’s 2nd District advanced to a runoff.

There have been five incumbent v. incumbent primaries so far: three between Democrats and two between Republicans.

New York will also be sending two new members to Congress through special elections in the 19th and 23rd Congressional Districts. The winners of those races will serve until January.

The race for agriculture commissioner, Democrats’ only statewide office held in Florida, is open. Incumbent Nikki Fried (D) is running for governor. Both Democrats and Republicans are holding a primary for this office.

The state’s chief financial officer is also up for election, with the incumbent Jimmy Patronis (R) on the ballot, but neither major party is holding a primary.

All 160 state legislative districts in Florida are holding elections. Republicans have a 23-16 majority in the Senate and a 76-42 majority in the House, with three vacancies across both chambers. Of the 114 incumbents running for re-election, 32 (28%) face contested primaries, the most in four election cycles.

New York’s 63 Senate districts are up. Democrats currently hold a 42-20 majority in the chamber, with one vacancy. Of the 55 incumbents on the ballot, 15 (27%) face primary challengers, making this the first cycle since 2014 where more than half of incumbents will advance directly to the general elections.

Use the links below to view Ballotpedia’s coverage of the battleground primaries and special elections we will be keeping an eye on today:

If you have elections coming up, use Ballotpedia’s Sample Ballot Lookup to see what’s on your ballot and bring your choices to the polls with our My Vote app!

Following his most recent re-election in 2020, Tomassoni, who had been a Democrat since his first election, announced he would leave the Democratic-Farmer-Labor Party and become an independent. Tomassoni began caucusing with Republicans but continued to identify as a Democrat according to The Associated Press’ Steve Karnowski.

As a Democrat, Tomassoni previously served as president of the senate in 2020, winning the post with bipartisan support in a rare instance where the leader of the chamber is from the chamber’s minority party.

At the time of his death, Tomassoni was serving as senate president pro tempore.

Tomassoni was not seeking re-election this year. There will not be a special election to fill the vacancy since the district is holding a regularly-scheduled general election in November and the Legislature is not in session.

Minnesota is one of three states—along with Alaska and Virginia—where different parties control the upper and lower chambers of the state legislature.

This year, 112 state legislators have left office early, creating vacancies. As things stand, this is a smaller number than in recent years, though several months remain. 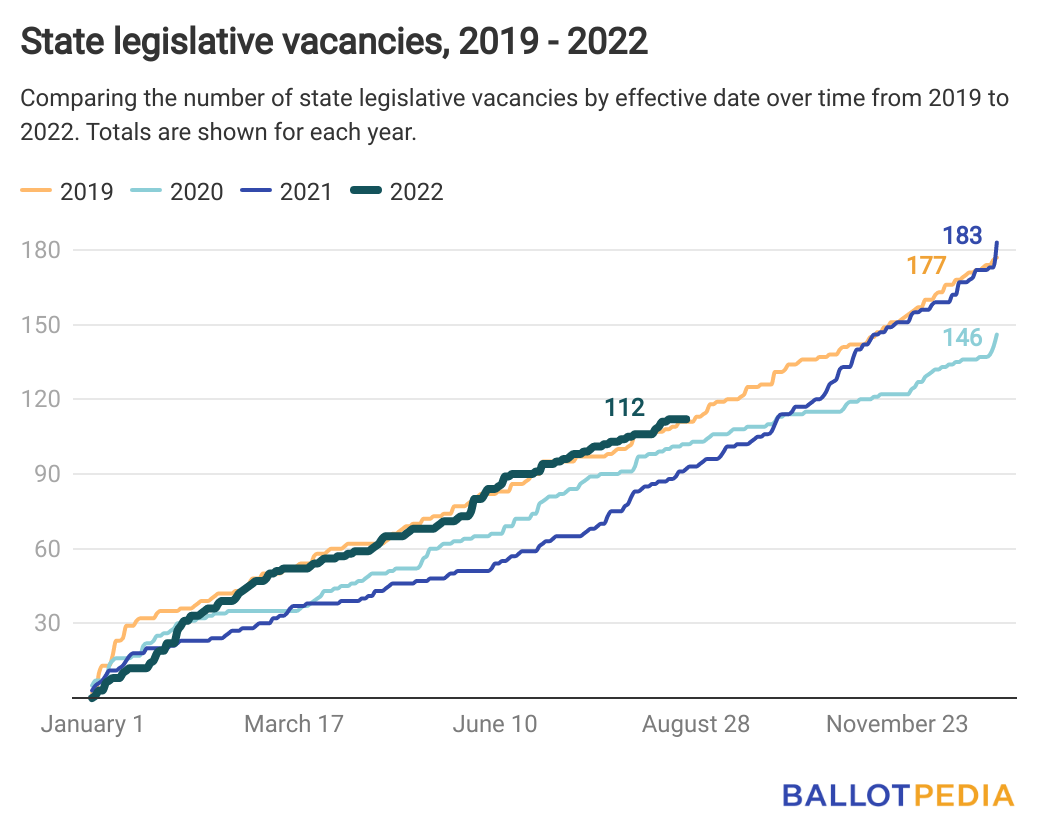 Previewing Massachusetts’ Democratic primary for secretary of the commonwealth

There are still four statewide primaries coming up in September. Today, let’s explore another upcoming battleground primary: Massachusetts’ Democratic primary for secretary of state on Sept. 6.

In Massachusetts, the secretary of the commonwealth is equivalent to secretaries of state elsewhere. The office oversees elections, manages public records, and handles business registrations, among other responsibilities.

First elected in 1994, incumbent Secretary of the Commonwealth William Galvin is running for re-election to an eighth term and faces Boston NAACP President Tanisha Sullivan in the Democratic primary.

The Boston Globe’s Matt Stout wrote that Galvin is “the only incumbent Democratic secretary of state being targeted within his own party” this year.

Galvin said his experience in office was important given the increased focus on elections, saying, “This is a critical time for democracy. That’s why I think I can provide a unique service [and] continue to do it effectively.”

Sullivan said she would do more to promote voting among minority communities, saying, “Despite record voter turnout in 2020 … voters from some of our most vulnerable communities still saw the lowest voter turnout across Massachusetts, leaving behind far too many voices.”

Sullivan received the state Democratic Party’s official endorsement with the support of 62% of delegates at the state convention last June.

Galvin has won three statewide Democratic primaries without the party’s official endorsement: in 1990, during his failed run for state treasurer, in 1994, during his first campaign for secretary of the commonwealth, and in 2018, when Galvin defeated Josh Zakim, receiving 67% of the vote to Zakim’s 33%.

If re-elected, Galvin would become the longest-serving secretary of the commonwealth in Massachusetts’ history.

And if Sullivan wins, she will become the first person of color and the first woman to hold the office.