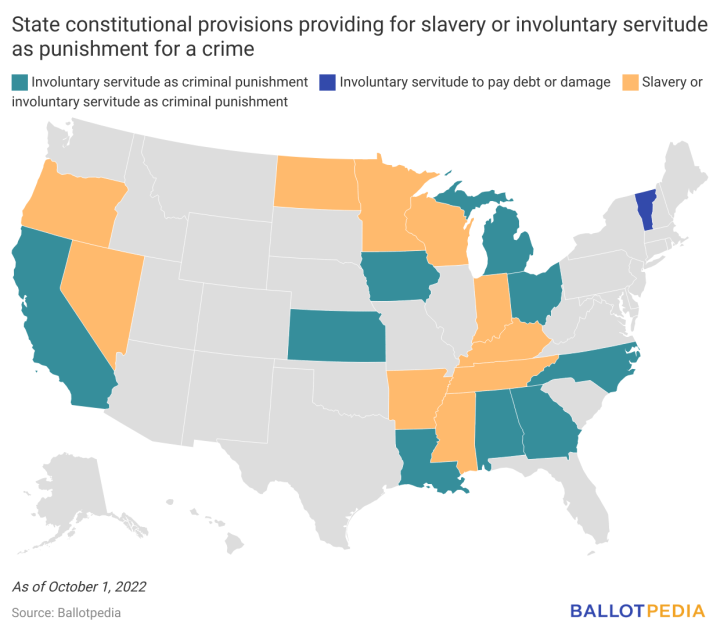 On November 8, 2022, voters in five states—Alabama, Louisiana, Oregon, Tennessee, and Vermont—will decide on amending their state constitutions to repeal language regarding the use of slavery or indentured servitude as punishment for a crime, or, in the case of Vermont, for the payments of debts, damages, fines, costs.

The ballot questions are below:

1. Neither slavery nor involuntary servitude, except as a punishment for crime whereof the party shall have been duly convicted, shall exist within the United States, or any place subject to their jurisdiction.

2. Congress shall have power to enforce this article by appropriate legislation.

The states with constitutions that include provisions regarding slavery and involuntary servitude as a criminal punishment are Arkansas, Indiana, Kentucky, Minnesota, Mississippi, Nevada, North Dakota, Oregon, Tennessee, and Wisconsin.

The states with constitutions that include provisions regarding involuntary servitude, but not slavery, as criminal punishment, are Alabama, California, Georgia, Iowa, Kansas, Louisiana, Michigan, North Carolina, and Ohio.

Vermont is the only state that has a constitutional provision regarding involuntary servitude to pay a debt, damage, fine, or cost.

Nebraska, Utah, and Colorado put measures on the ballot to remove language from their state constitutions regarding the use of slavery and involuntary servitude as criminal punishments. These amendments were approved in Nebraska and Utah in 2020, and in Colorado in 2018.