Welcome to the Tuesday, October 11, Brew.

Voters in five states—Alabama, Louisiana, Oregon, Tennessee, and Vermont—will decide constitutional amendments that would change language in their respective constitutions regarding slavery or indentured servitude as criminal punishments or as payment of debts.

The Thirteenth Amendment of the U.S. Constitution—ratified in 1865—prohibits slavery and involuntary servitude, except as a punishment for those convicted of crimes. This means states can decide whether to allow or prohibit that exception.

Here’s a quick look at the five measures on the ballot this year:

These measures, all of which were placed on the ballot by their respective state legislatures, are part of a growing trend that began in 2018 when voters in Colorado approved Amendment A with 66% of the vote. Voters in Nebraska and Utah removed similar language from their constitutions in 2020.

Rhode Island has had a constitutional ban on slavery since 1843. 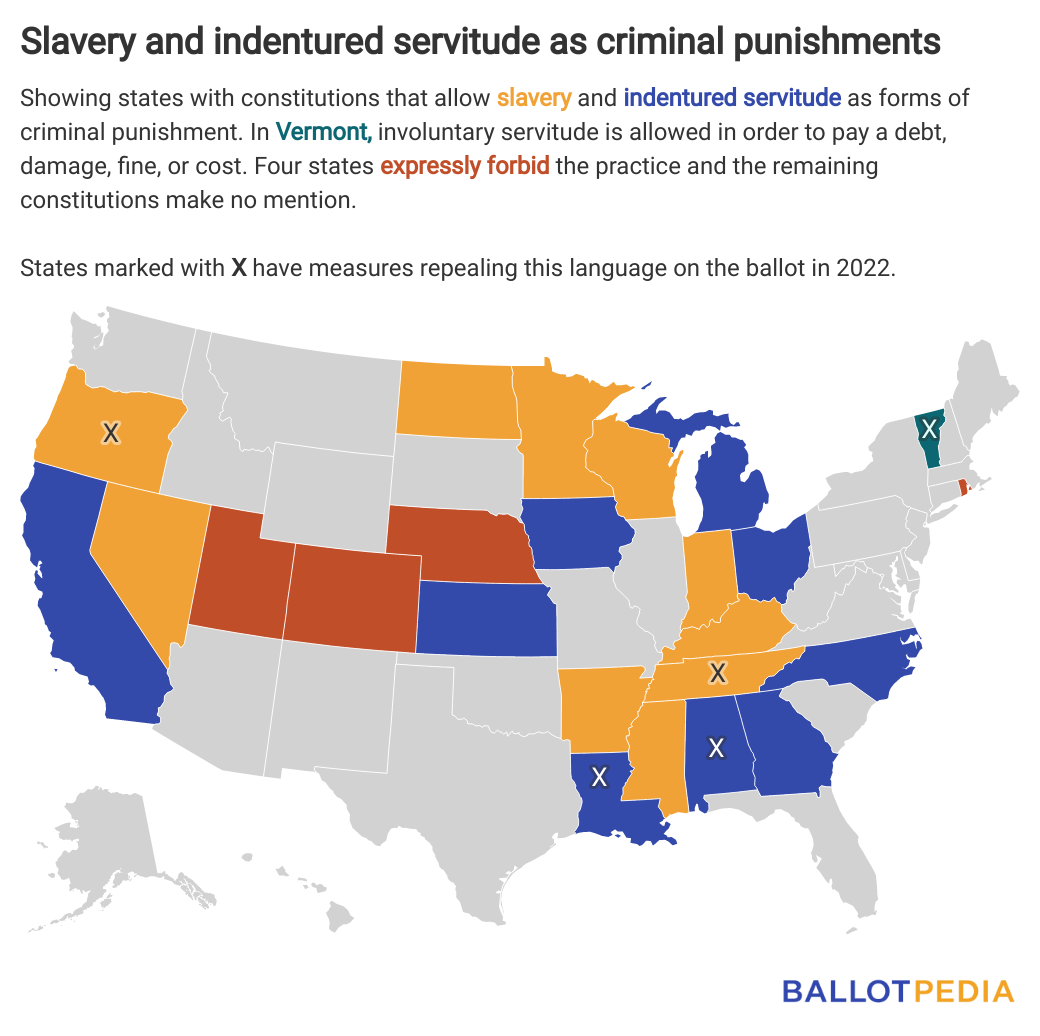 The general election is 28 days away and we are bringing you stories from some of the battleground races we are following closely between now and Nov. 8. Today, we’re looking at Georgia’s gubernatorial election.

Gov. Brian Kemp (R) and Stacey Abrams (D) are facing off, once again, for Georgia governor. The two ran against each other in 2018 for the then-open office, with Kemp defeating Abrams 50.2% to 48.8%.

Since then, Democrats won three statewide elections in Georgia:

An average of five recent polls found Kemp leading Arbams 49% to 45%. An average of 6% of respondents were either undecided or voting for some other candidate.

Two election forecasters rate the election as Lean Republican and one rates it as Tilt Republican.

In Georgia, if no candidate wins more than 50% of the vote, the top two finishers advance to a runoff election. Louisiana is the only other state that has a somewhat similar system.

Republicans have controlled the governorship and state Senate in Georgia since 2003. Two years later, Republicans won control of the state House, creating a Republican trifecta that remains in place today.

Today is the 31st day of our 50 States in 50 Days series, and we’re featuring New Jersey, the Garden State!

On the ballot in New Jersey

At the federal level, New Jerseyans will elect 12 U.S. Representatives.

New Jersey is one of four states—along with Louisiana, Mississippi, and Virginia—that hold state level elections in odd-numbered years, so no state executive or legislative offices are on the ballot this year.

The number of U.S. House districts in New Jersey remained the same at 12 following the 2020 census.

Congressional elections will take place under new district lines following the census. Our side-by-side map tool allows you to compare each district. Here’s an example of what New Jersey’s congressional map looked like before and after the 2020 census:

You can interact with our map comparison tools by visiting our New Jersey redistricting page here.

New Jersey voters will not decide any statewide ballot measures on Nov. 8.