Welcome to the Wednesday, October 12, Brew.

We’ve compiled a list of 15 statewide ballot measures to watch on Nov. 8, 2022. Members of Ballotpedia’s editorial department selected these measures based on their relation to wider policy debates, topic trends, campaign finance records, and unique situations. You can view summaries of each measure here. The list order is based on topics or similar issues.

Some of the trends we’re seeing with these 15 measures, as well as state ballot measures in general, are policies related to abortion, marijuana, and voting.

The governor alone appoints judges in four states, while a nominating commission provides the governor with a list of potential nominees in 23 states. In South Carolina and Virginia, the state legislature elects supreme court judges. The following map shows how judges are chosen in state supreme courts across the country.

There has been one state supreme court vacancy announced so far for 2023 in one of the 29 states where replacements are appointed. The vacancy occurred on the California Supreme Court when a justice was elevated to chief justice. Gov. Gavin Newsom (D) will appoint a replacement.

Today is the 27th day of our 50 States in 50 days series, and we’re featuring Washington, the Evergreen State.

On the ballot in Washington

Although state executive offices are typically on the ballot in presidential election years in Washington, there is a special election for secretary of state. Incumbent Steve Hobbs (D) is running in the special election. Hobbs was appointed to the position in 2021 to fill a vacancy.

Click here for more information about the races on the ballot this year.

Congressional and state legislative elections will take place under new district lines following the census. Our side-by-side map comparison tool allows you to immediately see what redistricting looks like in your state. Here are the congressional maps in effect before and after the 2020 redistricting cycle in Washington:

In 2022, 51 state legislative seats in Washington, or 42% of all seats up for election, do not have major party competition. When a candidate from only one of either the Democratic or Republican parties runs in a state legislative district, that party is all but guaranteed to win.

Republicans are running in 81% of all state legislative races. Twenty-three districts (19% of the total) do not have a Republican running, meaning a Democrat is likely to win. 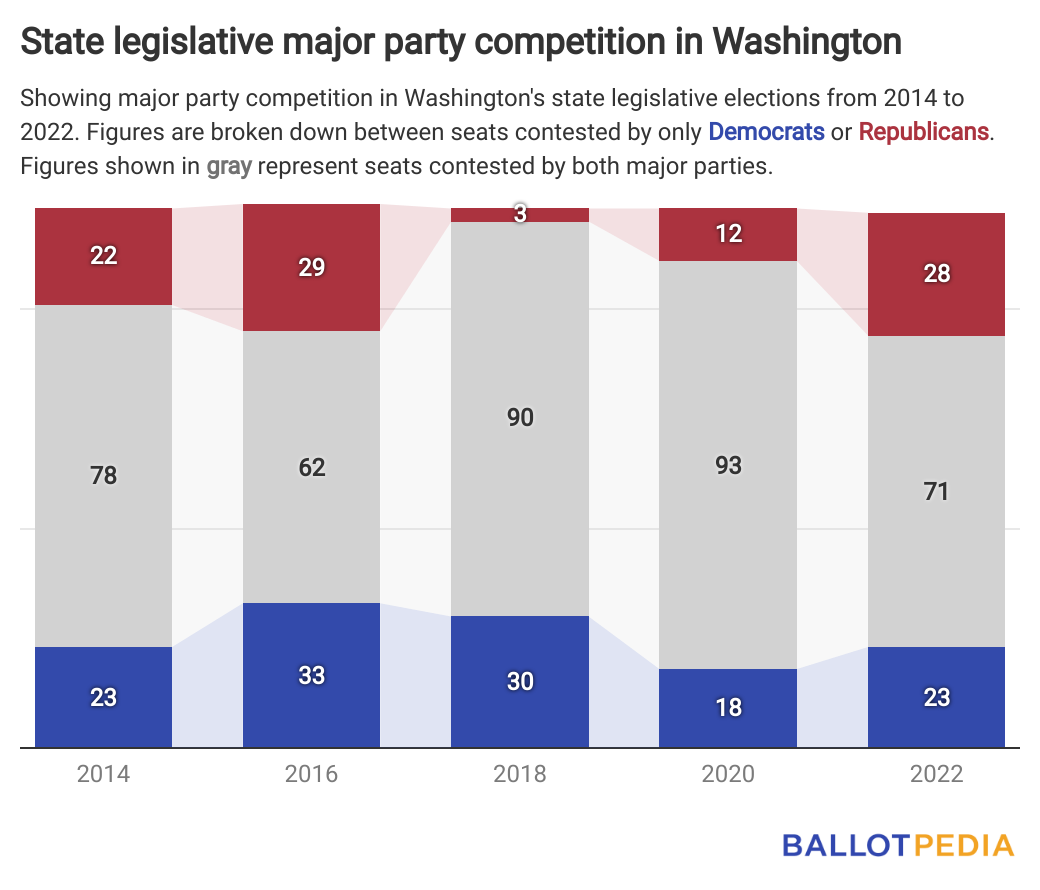 There are two measures on the ballot this year. Both were automatically referred to the ballot after the legislature passed two laws that created or increased taxes or fees. Initiative 960, which requires statewide advisory votes for any tax increases not approved by voters, is the measure that introduced the requirement putting the two on the ballot.