Welcome to the Friday, October 28, Brew.

Ballotpedia’s Annual Congressional Competitiveness Report found this year’s congressional elections to be among the most competitive of the past decade.

Much in line with the trends observed in our Annual State Legislative Competitiveness Report, an increase in open seat contests and more primary challenges to incumbents seeking re-election drove an overall rise in competitiveness this year.

At the same time, the number of head-to-head matchups between Democrats and Republicans in general elections decreased this year compared to 2020.

Incumbents did not seek re-election in 67 of the 469 congressional races this year (14%), guaranteeing those spots to newcomers.

When combined with incumbents defeated in primaries and mid-cycle resignations, we found an overall turnover of 84 members, the highest in a decade, and one driven primarily by an increase in Democrats leaving office. 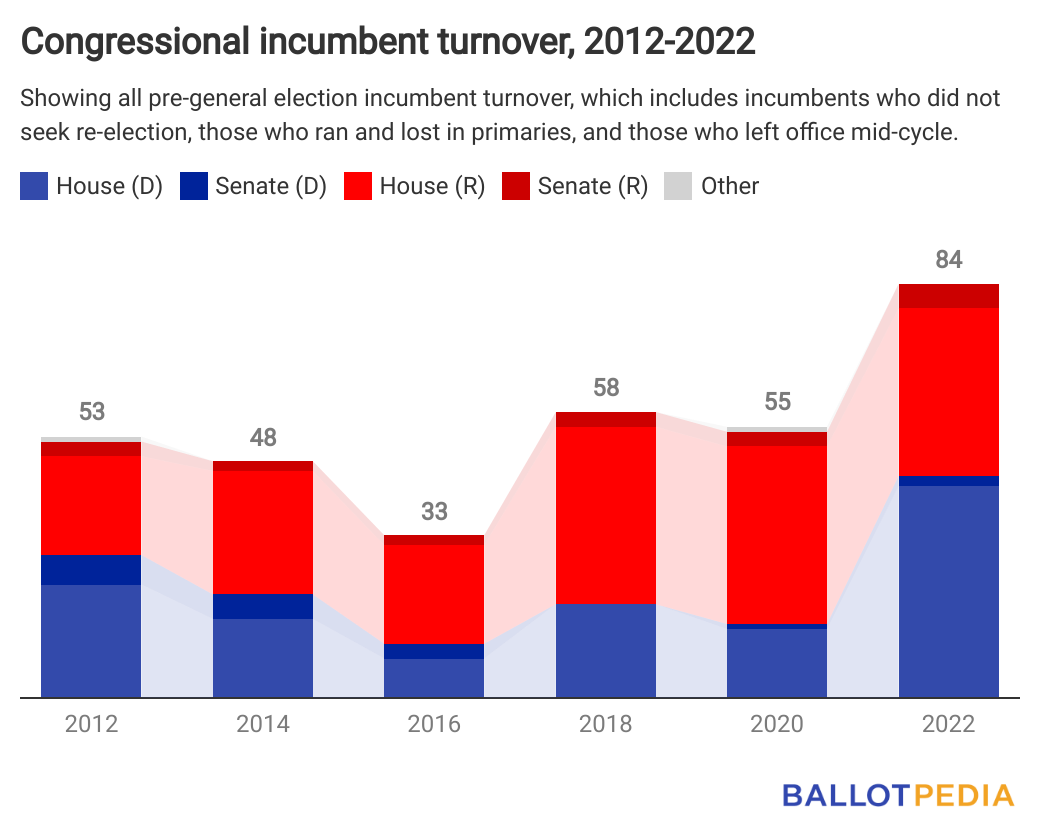 There were also 16 incumbents—10 Republicans and six Democrats—who lost primaries or nominating conventions. That’s up from eight incumbents who lost in 2020 and three who lost in 2018. Also, U.S. Rep. Jackie Walorski (R-Ind.), who died in August, will also not appear on the general election ballot.

The overall number of contested primaries—including those without incumbents—remained about the same as in 2018 and 2020, at 514 compared to 516 and 508.

But the partisan breakdown of those primaries changed.

The number of seats featuring only Democratic candidates remained the same at 12 this year compared to 2020, meaning the decrease in major party competition came from Democrats contesting 15 fewer seats, effectively guaranteeing them to Republicans.

This is also the first time since 2012 that Republicans have had more uncontested races than Democrats.

Use the link below to read Ballotpedia’s Annual Congressional Competitiveness Report for 2022.

This will be Alaska’s first U.S. Senate election decided using ranked-choice voting, and has been described as a contest between Murkowski and Tshibaka, who received 45% and 39% of the vote, respectively, in the primary. Three election forecasters rate the race as Solid or Safe Republican.

Murkowski, who first assumed office in 2002, has emphasized her experience in office and working relations with other Senators, saying “This race is about who can deliver best for Alaska. Through my seniority and ability to work across party lines, I’m getting real results for Alaska.”

Tshibaka, a former commissioner at the Alaska Department of Administration, said, “Murkowski enabled Biden’s agenda by casting the tie-breaking deciding vote to advance his anti-energy Interior Secretary nominee and confirming over 90% of his radical nominees.”

Murkowski is one of seven Republicans who voted to convict former President Donald Trump (R) during the impeachment proceedings following the breach of the U.S. Capitol on January 6, 2021.

Trump and the Republican Party of Alaska endorsed Tshibaka.

Today is the 44th day of our 50 States in 50 Days series, and we’re featuring Florida, the Sunshine State!

On the ballot in Florida

Florida voters will elect one U.S. Senate and 28 U.S. Representatives.

All 160 state legislative seats—40 in the Senate and 120 in the House—are on the ballot.

We are also covering 24 school board elections as well as municipal elections in Jacksonville and Tallahassee, and county-level elections in Hillsborough, Miami-Dade, Orange, and Pinellas Counties.

The number of U.S. House districts in Florida increased by one from 27 to 28 following the 2020 census.

Congressional and state legislative elections will take place under new district lines following the census. Our side-by-side map comparison tool allows you to compare each district. Here’s an example of what Florida’s congressional map looked like before and after the 2020 census:

You can interact with our map comparison tools by visiting our Wisconsin redistricting page here.

Democrats are running for 111 seats (69%). Forty-nine seats (31%) do not feature a Democratic candidate, meaning Republicans will likely win.

Republicans are running for 139 seats (87%). Twenty-one seats (13%) do not feature a Republican candidate, meaning Democrats will likely win.

There are three measures on the ballot this year:

All three measures are constitutional amendments, which, in Florida, require 60% of the vote for approval rather than a simple majority of the vote.