Welcome to the Tuesday, November 15, Brew.

This is the part of the election season where we get to crunch the numbers and analyze what happened. Let’s get started.

This year, 98 U.S. House districts overlapped with at least one Pivot County. As of Nov. 14, Republicans won 60 of those districts and Democrats won 35. Among the three uncalled races, Republicans lead in two.

Nineteen U.S. House districts overlapped these Reverse-Pivot Counties. As of Nov. 14, Democrats had won nine and Republicans had won eight. Both parties each lead in one of the two uncalled races.

Donald Trump’s endorsees won 87% of their races, 37% in battleground contests

According to Ballotpedia’s tracking, former President Donald Trump (R) endorsed 257 candidates who appeared on the Nov. 8 ballot. This includes all regularly-scheduled general elections at all levels of government, Louisiana’s primaries, and the special U.S. Senate election in Oklahoma.

Thirty-five of those called races were battleground congressional or gubernatorial elections, rated as either a toss-up or lean/tilt Democratic or Republican by The Cook Political Report, Inside Election, or Sabato’s Crystal Ball. 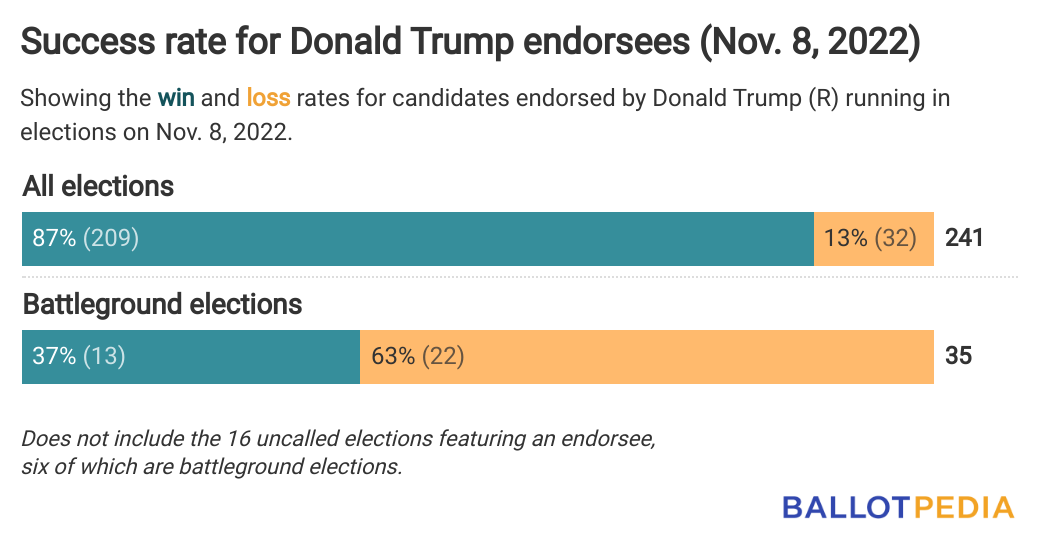 Trump’s lowest win rate was in gubernatorial races, where he endorsed 21 candidates. Two of those races—in Alaska and Arizona—remain uncalled. Of the 19 elections where we know the outcome, nine of Trump’s endorsees won (47%)

These dates are as of Nov. 14. In both the House and Senate, some Republican members have publicly requested a delay of the leadership elections until more pending elections are called.

In both chambers, Republican members will select several positions, including:

The speaker of the House will not be elected until the new 118th Congress convenes on Jan. 3, 2023, but it is common for parties to make known now who their selections will be then.

House members will make their pick tomorrow, but ultimately, who becomes speaker will depend on which party controls a majority of the chamber.

Even then, to become speaker, a person must receive a majority of votes cast. With all 435 members present, that is 218 votes, but if a member is absent or if a race remains uncalled and no member is sworn in on Jan. 3, the number of votes needed would decrease.

In a House where either party controls only a slim majority, a speaker nominee would need near-unanimous support from their party to win. This would give leverage to smaller groups within each party, who could vote against a nominee from their own party and prevent that majority-vote threshold.