Welcome to the Tuesday, November 22, Brew.

Sixteen of the 100 most populous cities held general elections for mayor on Nov. 8, and in at least one of them, partisan control of the office changed.

In the remaining nine called races, mayoral partisan affiliations are unchanged. Democrats held onto six offices, Republicans retained one, and nonpartisan incumbents were re-elected in two.

Overall, Democrats controlled 62 of the mayorships in the 100 largest cities heading into the general election, Republicans controlled 25, and independent or nonpartisan officeholders controlled 11. The mayorship in Anaheim, Calif., was vacant and Ballotpedia could not determine an affiliation for the mayor of Arlington, Texas.

With the Democratic pick-up in North Las Vegas, the party currently has a net gain of one mayorship in the most populous 100 cities, while Republicans have a net loss of one. 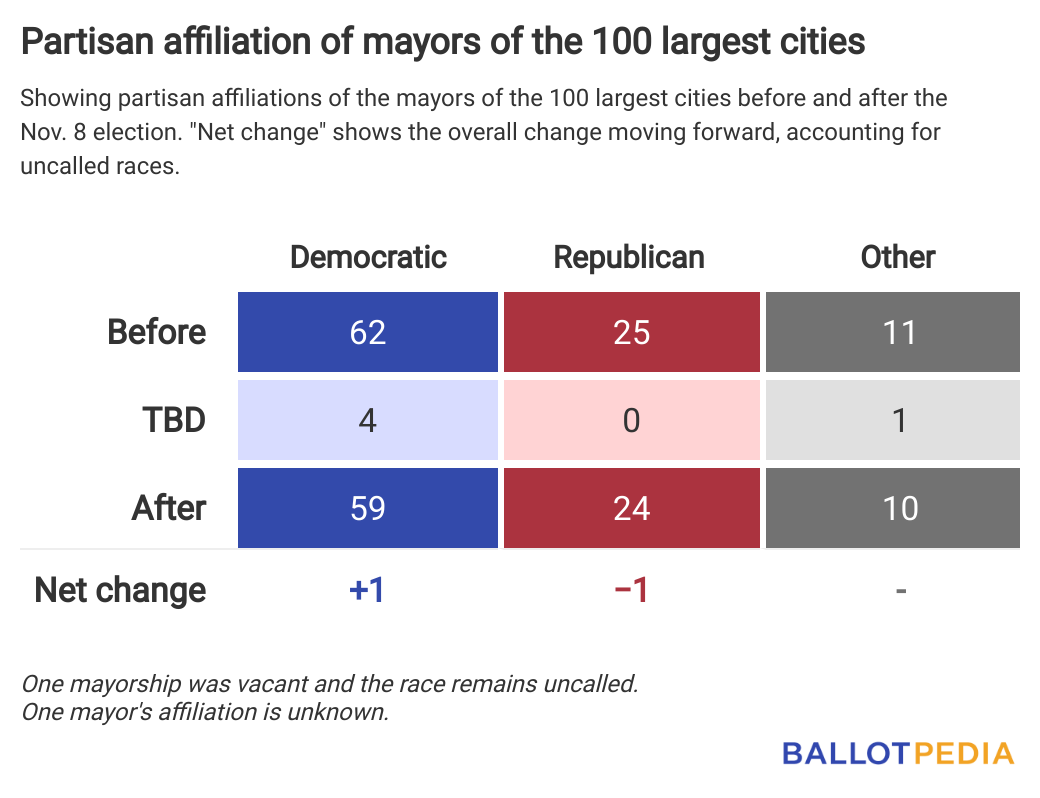 Six elections remain uncalled. Two races in Texas are heading to December runoffs and four races in California remain too close to call.

In addition to the 16 elections held on Nov. 8, there were eight others that took place earlier this year, resulting in one partisan change. Republicans gained the mayorship in Henderson, Nev., after Michelle Romero (R) won election to the open position, succeeding Debra March (D).

Where things stand with ranked-choice voting

On Nov. 8, voters in Nevada and nine municipalities decided on ranked-choice voting ballot measures. Here are the results:

Even though voters approved Question 3, that was just the first step. Since this was an initiated constitutional amendment, voters need to approve it again in 2024 in order for it to go into effect in 2026.

These municipalities and counties will use ranked-choice voting for city council members and other local offices, like the mayor, depending on the specifics of the measure.

One measure remains too close to call. In Seattle, voters were posed with two questions. The first was whether to change the city’s election procedures. If voters approved a change, the second question determined what those procedures would become.

On the second question, voters decided that, if a change were approved, the city would adopt ranked-choice voting. But as of Nov. 21, the results for the first question, whether to change at all, remained too close to call with 50.4% in favor and 49.7% opposed.

The dust has not yet settled on the 2022 elections, but candidates in Chicago are getting ready for the next round of elections.

The filing deadline for Chicago’s upcoming 2023 municipal elections is Nov. 28 – that’s right, in less than one week. Voters in the country’s third-largest city will elect the following positions:

Chicago’s municipal elections are officially nonpartisan, meaning all candidates’ names appear on the same ballot without party labels. But local parties and other partisan organizations tend to endorse or support specific candidates while campaigning.

For every office apart from the police district council, a candidate must receive at least 50% of the vote on Feb. 28 to win outright, otherwise, the top-two finishers will advance to an April 4 runoff.

For the police district council, the top-three finishers win in each district. There are no runoffs for this office.