Have a question/feedback/or just want to say hello? Respond to this email!

Eleven election-related ballot measures appeared on the ballot in 10 states on Nov. 8, and voters in Louisiana decided on an election-related initiative on Dec. 10. Seven of the measures concerned voting policy, with voters approving measures on issues such as ranked-choice voting, early voting, and voter eligibility. One state approved a voter ID requirement, while another state rejected a similar requirement.

Five measures related to citizen-initiated ballot measure processes. Voters approved three measures requiring single subjects for ballot initiatives, requiring a three-fifths vote for citizen-initiated measures, and mandating that initiatives include information on how they would affect the amount of income tax owed by taxpayers. Another measure requiring a three-fifths vote failed to gain approval, as did a measure allowing a state legislature to repeal a voter-approved ballot initiative.

Connecticut, one of five states without some form of early voting, approved Question 1, a constitutional amendment allowing the Connecticut General Assembly to pass laws providing for in-person early voting. The measure passed 60.53% to 39.47%.

In Michigan, voters approved an initiated constitutional amendment, Proposal 2, 59.99% to 40.01%. Proposal 2 establishes various voting policies as rights in the Michigan Constitution, such as requiring nine days of early voting, requiring the state to fund prepaid stamps and a system for tracking absentee ballots, and establishing that people have a right to vote without harassment, interference, or intimidation.

In Arizona and Nebraska, voters decided on ballot measures to require or alter voter identification requirements. Arizona voters rejected Proposition 309, which would have required voters’ date of birth and voter identification number for mail-in ballots and eliminated the two-document alternative to photo ID for in-person voting, by a margin of 0.76%.

Voters in Ohio approved Issue 2, a constitutional amendment to prohibit local governments from allowing anyone lacking the qualifications of an elector, including citizenship, to vote. The measure passed 76.90% to 23.10%.

Voters in Arizona, Arkansas, and Colorado decided on five legislative proposals to change citizen-initiated ballot measure processes this year. Three of these proposals were approved.

In Arizona, voters approved two out of three constitutional amendments related to ballot measures. Proposition 129 (approved 55.23% to 44.77%), creates a single-subject rule for ballot initiatives, adding Arizona the other 16 other states with a single-subject rule. Proposition 132 (approved 50.72% to 49.28%) requires a 60% vote for voters to pass ballot measures to approve taxes. Proposition 128, which would have allowed the legislature to repeal a voter-approved ballot initiative following a state or federal supreme court order striking down a portion of the initiative, was defeated 63.60% to 36.40%.

In Colorado, voters approved Proposition GG, a proposal requiring a table showing changes in income tax owed for average taxpayers in certain brackets to be included in the ballot title for initiated measures. The measure passed 71.92% to 28.08%.

On Dec. 12, the New York State Legislature delivered two election-related bills to Gov. Kathy Hochul (D) after both chambers of the legislature approved the bills earlier this year. Assembly Bill A04261 standardizes the objection process for ballot access documents, while Senate Bill S02951 amends the state’s deadlines for the mailing and receipt of voter registration applications. 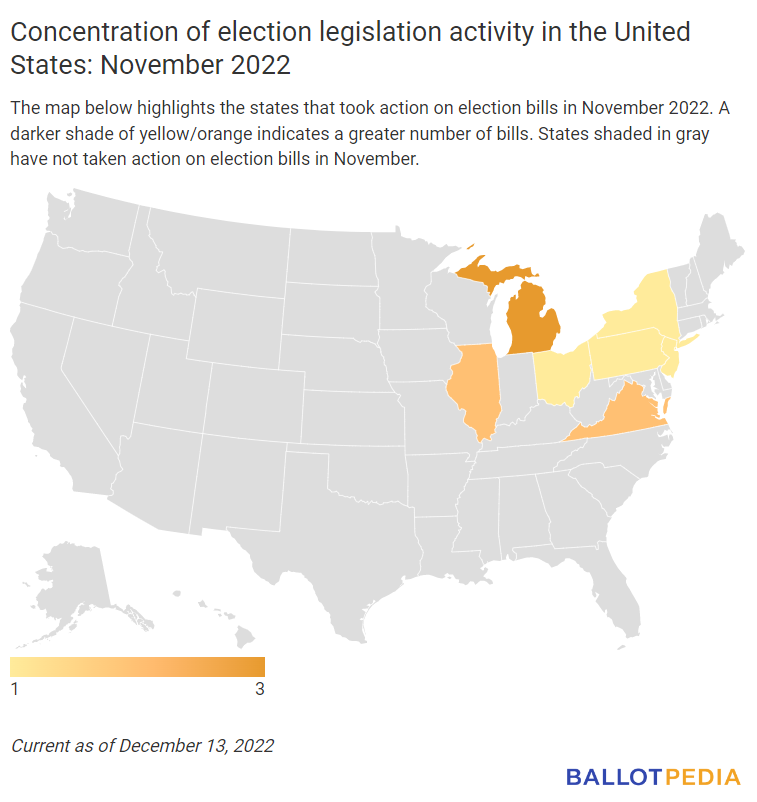 This information comes from Ballotpedia’s Election Administration Legislation Tracker, which went live on June 29. This free and accessible online resource allows you to find easy-to-digest bill tags and summaries—written and curated by our election administration experts! We update our database and bill-tracking daily. Using our powerful interactive search function, you can zero in on more than 2,500 bills (and counting) covering these topics:

To make your search results more precise, we first place bills into one of 22 parent categories. We then apply to each bill one or more of the 88 tags we’ve developed.

If you don’t want to immerse yourself in the world of election legislation quite that often, we have a free, weekly digest that goes straight to your inbox and keeps you caught up on the week’s developments.