Welcome to the Friday, January 20, Brew.

In 2022, Ballotpedia tracked 232 bills that would change the citizen-initiated ballot measure processes, the most since 2014.

Twenty-three proposals were enacted into law, representing 9.9% of those 232 bills, the lowest percentage over that timespan.

Since 2014, lawmakers have introduced an average of 189 bills affecting ballot measure processes. Twenty-seven tend to pass, with an average passage rate of 14.2%.

Examples of bills passed in 2022 include:

In addition to these bills, voters also decided an increased number of legislatively referred ballot measures on the initiative process in 2022.

There were six such measures on the ballot in four states: five constitutional amendments and one referred statute. This is up from two in 2018 and four in 2020. Voters approved two and rejected three:

Ten of those races were for the U.S. Senate, where 35 seats were up for election. Seventy-five were in the House, where all 435 districts were on the ballot.

The list below shows the five offices with the narrowest margins of victory in 2022, along with the winning candidate and margin of victory. Of these five races, incumbents won re-election in two, one incumbent—Yvette Herrell (R-N.M.)—lost, and the two races in California and Michigan were for open seats. 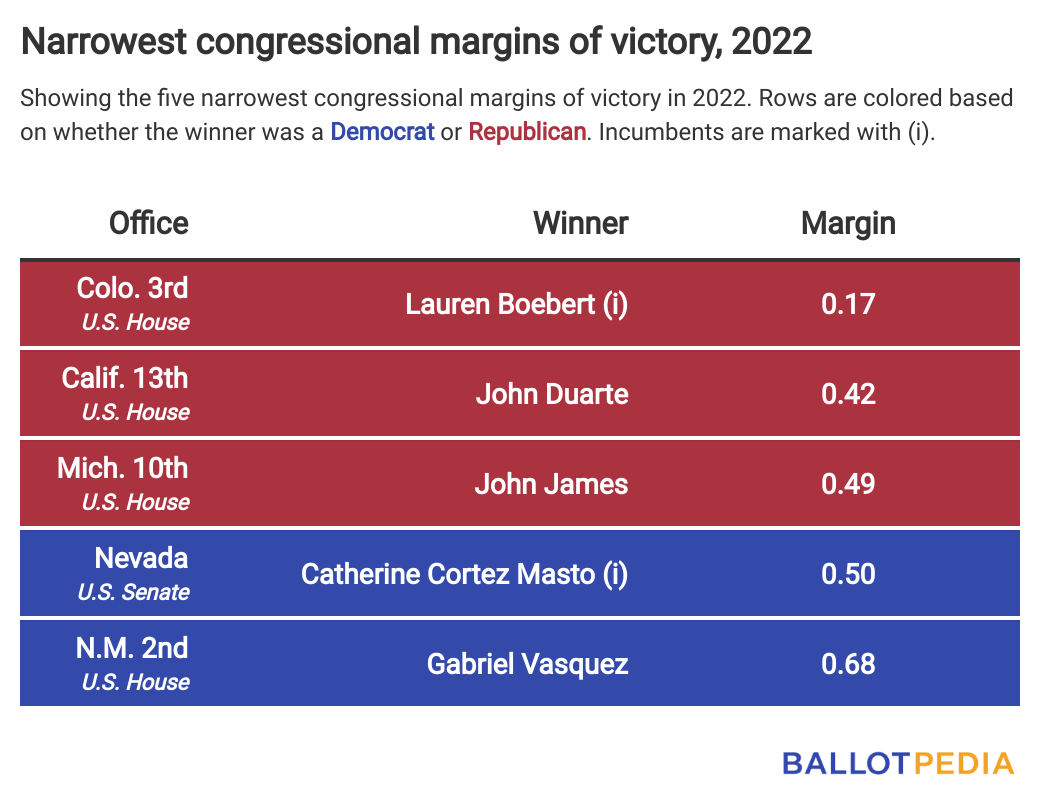 #FridayTrivia: How many people have filed with the FEC to run for president in 2024?

In Thursday’s Brew, we looked at the most recent presidential candidate filings with the Federal Election Commission (FEC). As of Jan. 17, the number of people who have filed to run is already at its third-highest level in 40 years. To run for president, you must be a natural-born citizen of the U.S., at least 35 years old, and a resident of the U.S. for at least 14 years.