Connecticut state Senator Alex Kasser (D) resigned from the legislature on June 22. Kasser, who represented District 36, cited her ongoing divorce proceedings as the reason for her resignation.

In a statement, Kasser said, “It is with deep sadness that I announce my resignation as State Senator. Serving the residents of Connecticut’s 36th Senate district has been a profound honor and a great joy. However, due to personal circumstances, I cannot continue.”

Kasser was first elected to the state Senate in 2018, defeating incumbent Scott Frantz (R), 50% to 49%. She won re-election in 2020, defeating challenger Ryan Fazio (R), 51% to 49%. Before entering politics, Kasser worked as the chair of Mount Sinai Children’s Environmental Health Center and as the director of Greening Our Children. She also founded The Parity Partnership, a non-profit organization that works to achieve equality for women in business.

Ballotpedia has identified 57 vacancies in state legislatures in 2021. Twenty-eight of these vacancies were in seats previously held by Democrats, and 29 were in seats held by Republicans. Thirty-nine of the vacancies have been filled.

At the time of her election to Congress, Stansbury served in the New Mexico House of Representatives, representing District 28. She was first elected in 2018, defeating incumbent Jimmie Hall (R), 54% to 46%. Before running for office, Stansbury worked for the U.S. Senate Committee on Energy and Natural Resources and the Office of Management and Budget. She has also worked as a science educator with the New Mexico Museum of Natural History and Science.

When a vacancy occurs in the New Mexico House of Representatives, the governor appoints a replacement from a list provided by the board of county commissioners representing the vacant seat. The governor is not required to appoint someone of the same party as the last person who held the seat.

The Oregon House of Representatives voted to expel state Rep. Mike Nearman (R) on June 10. Nearman’s colleagues expelled him due to video footage that showed him helping protesters, some of whom were armed, enter the state Capitol building on December 21, 2020. This led to a struggle between the protesters and police officers, causing injuries and property damage.

The resolution to expel Nearman passed 59-1, with only Nearman voting against. According to Oregon Public Broadcasting, Nearman is the first person to have ever been expelled from the Oregon Legislature.

Nearman was first elected to represent District 23 in the Oregon state House in 2014, defeating incumbent Jim Thompson (R) in the Republican primary. Before he entered politics, Nearman worked in software engineering and tech support.

U.S. Rep. Val Demings (D) officially announced her candidacy for the U.S. Senate on June 9. Demings currently represents Florida’s 10th Congressional District. Marco Rubio (R) is Florida’s incumbent U.S. Senator who is up for election in 2022. He was first elected to the Senate in 2010.

Demings announced she was running in a three-minute video in which she discussed how her upbringing and experiences had given her “tireless faith that things can always get better.” Demings said in the video, “I have never tired of representing Florida. Not for one single moment.”

Demings is the 12th member of the House of Representatives to announce they are retiring or seeking another office. Six of those are Democrats, and six are Republicans. Demings is one of four members who are seeking a seat in the U.S. Senate.

Florida Department of Environmental Protection Secretary Noah Valenstein stepped down from his position on June 4. He had led the agency for over four years since former Gov. Rick Scott (R) appointed him on May 23, 2017. Shawn Hamilton, the department’s deputy secretary for land and recreation, will take over as interim secretary.

In his resignation letter to Gov. Ron DeSantis (R), Valenstein said, “it has been an honor to head Florida’s lead environmental agency during a time where natural resource protection has been a top priority, with unprecedented support and advancements.”

Before he was appointed secretary, Valenstein worked as the executive director of the Suwannee River Water Management District. He has also worked on environmental policy in the Florida House of Representatives and for Gov. Scott.

The secretary of the Florida Department of Environmental Protection heads the agency responsible for protecting the state’s natural resources and enforcing its environmental laws. The department also oversees Florida’s state parks and trails system, among other duties. The governor appoints the secretary with the agreement of three or more members of the governor’s cabinet. 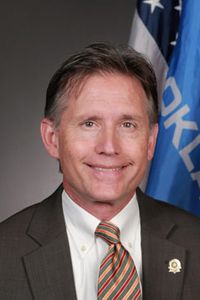 Oklahoma Attorney General Mike Hunter (R) announced on May 26 that he would be resigning effective June 1. Hunter cited “personal matters that are becoming public” as the reason for his resignation. The Oklahoman reported that Hunter allegedly had an affair with another state employee.

In a statement, Hunter said, “It has been a distinct and absolute privilege of a lifetime to serve as the state’s attorney general…I cannot allow a personal issue to overshadow the vital work the attorneys, agents, and support staff do on behalf of Oklahomans.”

Gov. Mary Fallin (R) appointed Hunter attorney general of Oklahoma in 2017 after former Attorney General Scott Pruitt (R) was sworn in as administrator of the U.S. Environmental Protection Agency. Hunter was then elected to a full term in 2018. Before his appointment as attorney general, Hunter served as secretary of state of Oklahoma from 2016 to 2017 and from 1999 to 2002. Hunter began his political career by serving in the Oklahoma House of Representatives from 1984 to 1990.

The attorney general is an executive office in all 50 states and the District of Columbia, serving as the chief legal advisor and chief law enforcement officer for the state government. The office is empowered to prosecute violations of state law, represent the state in legal disputes, and issue legal advice to state agencies and the legislature.

The attorney general is an elected position in 43 states and the District of Columbia, including Oklahoma. However, when a vacancy occurs in the Oklahoma attorney general’s office, the governor appoints a successor to serve until the next election.

Before Dunleavy appointed Taylor attorney general, Taylor served as deputy attorney general in charge of the civil division at the Alaska Department of Law. In 2016, he ran unsuccessfully for a seat on the Anchorage Municipal Assembly.

The two previous attorneys general of Alaska both resigned due to allegations of misconduct. Kevin Clarkson resigned after an investigation revealed that he had sent inappropriate text messages to a junior employee. Sniffen resigned after a former member of a high school mock trial team coached by Sniffen alleged that she and Sniffen had a sexual relationship when she was 17 years old.

The attorney general is a state executive office in all 50 states and is the chief legal advisor for state government. Attorneys general are empowered to prosecute violations of state law, represent the state in legal disputes, and issue legal advice to state agencies and the legislature.

U.S. Representative Charlie Crist (D) announced he is running for governor of Florida on May 4. Crist is the first Democrat to declare he’s challenging incumbent Gov. Ron DeSantis (R), who was first elected in 2018. Crist currently represents Florida’s 13th Congressional District and served as governor of Florida as a Republican from 2007 to 2011.

As reported in The Hill, Crist said when announcing his candidacy, “we can build a Florida for all Floridians. We can create a society that values every person. We can break the fever of division and hatred that has afflicted our politics.”

Crist began his political career serving as a Florida state senator as a Republican from 1993 to 1999. He also served as Florida’s state education commissioner and then its attorney general before running for governor in 2006. Rather than running for a second term as governor, Crist mounted a campaign for Senate in 2010, losing to Marco Rubio (R).

Crist became an independent after his loss to Rubio in the Republican primary, and became a Democrat in 2012. In 2014, Crist ran for governor, losing to Rick Scott (R). He was elected to the U.S. House in 2016 from Florida’s 13th congressional district.

At the end of every month, Ballotpedia tallies the partisan balance of state legislatures, which refers to which political party holds a majority of seats in each chamber. Republicans currently control 61 chambers, while Democrats control 37. One chamber, the Alaska House of Representatives, has a power-sharing agreement between the two parties.

At the end of April, Republicans held 1,091 of the 1,972 total state senate seats, while Democrats held 869. The Republicans gained two seats since March, while the Democrats’ number of seats remained the same. Republicans also held 2,917 of the 5,411 total state House seats (down one from last month), while Democrats controlled 2,449 (up two). Third-party or independent officeholders held 38 seats, and there were 19 vacancies.

Georgia State Representative Bert Reeves (R) resigned from the state’s General Assembly on April 30 to take a new role at Georgia Tech. He represented District 34 from 2015 to 2021.

Reeves will serve as the school’s vice president for institute relations, working on government and community relations and economic development. Reeves graduated from Georgia Tech with a bachelor’s degree in management and served as the school’s mascot, “Buzz,” from 1997 to 2000.

Reeves was first elected to the Georgia House of Representatives in 2014 after defeating incumbent Charles Gregory in the Republican primary, 52% to 48%. He was re-elected in 2016 and 2018, and most recently in 2020, defeating challenger Priscilla Smith (D), 56% to 44%.

When a vacancy occurs in the Georgia state legislature, the governor must declare a special election within ten days of the vacancy. The election must be held between 30 and 60 days after the governor’s announcement.