Teresa Chafin joined the Virginia Supreme Court this week to fill the vacancy created by Justice Elizabeth McClanahan’s retirement on September 1. In February 2019, the Virginia General Assembly unanimously approved Chafin to succeed McClanahan.
Chafin received her J.D. from the University of Richmond School of Law in 1987. Her previous judgeships included serving on the state’s 29th Judicial Circuit from 2005 to 2012 and on the Virginia Court of Appeals from 2012 to 2019.
State supreme court justices in Virginia are appointed through legislative selection. As outlined in Article VI of the Virginia Constitution, judges are selected by a majority vote of the Virginia General Assembly, which is the combined House of Delegates and state Senate. Supreme court justices serve for 12 years and are subject to reappointment to additional terms by the legislature. Virginia is one of two states, the other being South Carolina, where judges are selected using this method.
The Virginia Supreme Court is the state’s court of last resort. It is made up of seven justices. As of September 2019, the justices were:
Three justices–Powell, Goodwyn, and Mims–were selected by a General Assembly with a Democratic-controlled Senate and a Republican-controlled House. However, Republicans held a majority in the General Assembly overall. Justices Powell and Mims were selected when Republicans had a 77-61 majority. Justice Goodwyn was appointed by Gov. Tim Kaine (D) in 2007 while the legislature was out of session, and he was later approved by the 74-63 Republican-majority General Assembly in 2008. Justices Chafin, Lemons, Kelsey, and McCullough were selected by a General Assembly with Republican control of both chambers.
In 2019, there have been 18 supreme court vacancies across 12 of the 29 states where replacement justices are appointed instead of elected. Of those 18 vacancies, 12 are in states where a Republican governor appoints the replacement. Five vacancies occurred in a state where a Democratic governor appoints the replacement, and one (Virginia) occurred in a state where a Republican-controlled legislature appoints the replacement.
Additional reading:
https://ballotpedia.org/Teresa_M._Chafin
https://ballotpedia.org/Elizabeth_McClanahan
https://ballotpedia.org/Supreme_Court_of_Virginia
https://ballotpedia.org/State_supreme_court_vacancies,_2019 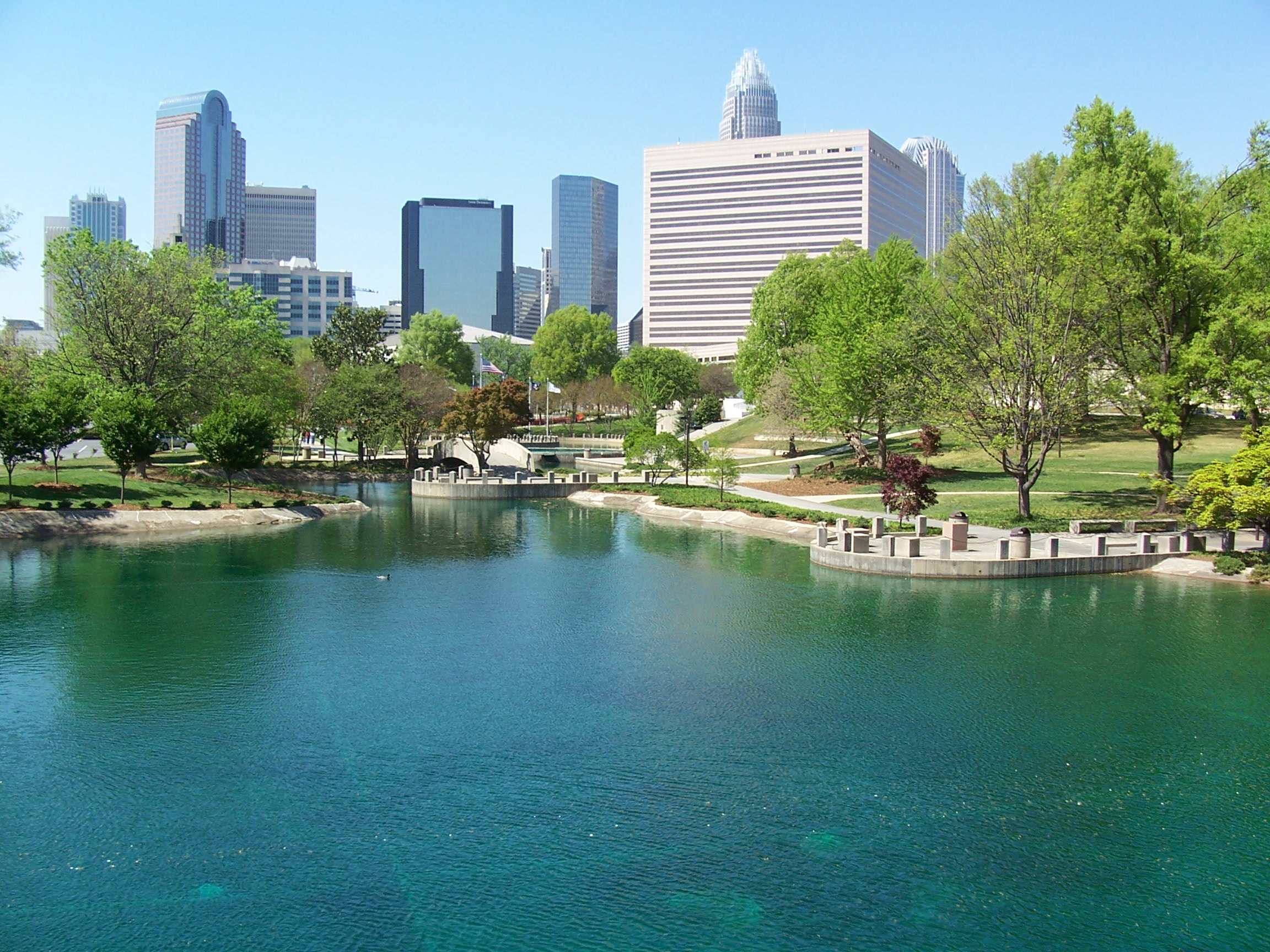 In North Carolina, Charlotte Mayor Vi Lyles is running for re-election in the Democratic primary on September 10, 2019. Four opponents—Roderick Davis, Tigress Sydney Acute McDaniel, Joel Odom, and Lucille Puckett—are challenging her in the primary. The winner will advance to the general election on November 5 and face the Republican nominee, David Michael Rice. Rice was the only Republican candidate who filed to run, and he advanced automatically to the general election.
Here are the five Democratic primary candidates:
As of September 4, the mayors of 62 of the country’s 100 largest cities are affiliated with the Democratic Party. Republican-affiliated mayors hold 30 offices, independents hold four, and mayors with unknown party affiliations hold the remaining four.
All 11 seats on the Charlotte City Council are also up for election in 2019. A partisan primary is scheduled for 10 of the 11 seats on September 10. The other seat, District 6, had its primary canceled since only one candidate from each party filed to run. Charlotte is the largest city in North Carolina and the 17th-largest city in the U.S. by population. The only other municipality in North Carolina that could have had a September 10 primary was Sanford in Lee County. However, their four city council primaries were also canceled due to the number of candidates who filed from each party.
In 2019, Ballotpedia is expanding its coverage of North Carolina in order to provide voters with a comprehensive statewide sample ballot. This coverage includes North Carolina elections spanning 503 cities, towns, and villages, nine school districts, and 17 special districts. No North Carolina counties are holding elections in 2019. Most North Carolina localities are holding nonpartisan general elections on November 5, although 32 are holding either nonpartisan primaries or general elections on October 8.
Additional reading:
https://ballotpedia.org/City_elections_in_Charlotte,_North_Carolina_(2019)
https://ballotpedia.org/City_elections_in_Sanford,_North_Carolina_(2019)
https://ballotpedia.org/North_Carolina_local_elections,_2019
https://ballotpedia.org/Partisanship_in_United_States_municipal_elections_(2019)

Forty-seven years ago, voters in California approved Proposition 4, a constitutional amendment declaring that presidential primary candidates who appear on the ballot are “those found by the Secretary of State to be recognized candidates throughout the nation or throughout California for the office of the President of the United States, and those whose names placed on the ballot by petition.” Proponents of the 1972 ballot measure argued, “In the last presidential primary election, California voters were denied the opportunity of voting for or against either of the men who eventually become the presidential nominees” due to the parties using what proponents called a favorite son device.
Jumping forward to 2019, and the wording of Proposition 4 is receiving renewed attention after Gov. Gavin Newsom (D) signed Senate Bill 27 (SB 27) into law. SB 27 was designed to require presidential and gubernatorial candidates to file copies of their last five federal income tax returns in order to appear on the primary election ballot.
Several entities and individuals, including President Donald Trump (R), filed litigation in federal courts to declare SB 27 in violation of the U.S. Constitution. On August 6, 2019, the California Republican Party and the party’s leader, Jessica Millan Patterson, asked the state’s highest court, the California Supreme Court, to decide whether SB 27 violated the California Constitution, including Proposition 4.
The legal complaint said Proposition 4 was intended to “guarantee California voters the right to consider all of the candidates seeking election to the highest office in the land,” and that SB 27 prohibited Secretary of State Alex Padilla (D) “from exercising his constitutionally delegated duty to place the name of all nationally recognized presidential candidates.”
Attorneys for the defendant, Secretary of State Padilla, responded that Proposition 4 “imposes no mandatory duty on the secretary of state, but rather provides that the secretary will ‘find’ candidates that are ‘recognized … throughout the nation’ and include them on California primary ballots.”
On August 21, 2019, the California Supreme Court voted to take up the case, with written arguments due on September 11. The court has asked the plaintiffs (California GOP and Patterson) and the defendant (Padilla) to address the legislative history of Proposition 4 and related laws and the guidelines that the secretary of state has employed to assess who is a recognized candidate under Proposition 4.
Related pages:
https://ballotpedia.org/Ballot_access_requirements_for_presidential_candidates_in_California
https://ballotpedia.org/Donald_Trump%27s_tax_returns_and_net_worth

Donald Trump appointed and the Senate confirmed 146 Article III federal judges through September 1, 2019, his third year in office. This is the second-most Article III judicial appointments through this point in a presidency of all presidents dating back to Theodore Roosevelt. Only Bill Clinton, with 165 judicial appointments, had more.
The average number of federal judges appointed by a president through September 1 of their third year in office is 82.
The median number of Supreme Court justices appointed is two. William Taft’s (R) five appointments were the most among this set. Presidents Franklin Roosevelt (D), Jimmy Carter (D), and George W. Bush (R) did not appoint any justices through September 1 of their third years in office. Trump has appointed 2 justices so far.
The median number of United States Court of Appeals appointees is 18. Trump appointed the most with 43, and Presidents Theodore Roosevelt (R) and Woodrow Wilson (D) appointed the fewest with five each. Trump’s 43 appointments make up 24 percent of the total 179 judgeships across the courts of appeal.
The median number of United States District Court appointees is 56. Clinton appointed the most with 135, and T. Roosevelt appointed the fewest with 10. Trump has appointed 99 district court judges. Those appointments make up 15 percent of the 677 judgeships across the district courts.
Article III federal judges are appointed for life terms by the president of the United States and confirmed by the U.S. Senate per Article III of the United States Constitution. Article III judges include judges on the: Supreme Court of the United States, U.S. courts of appeal, U.S. district courts, and the Court of International Trade. 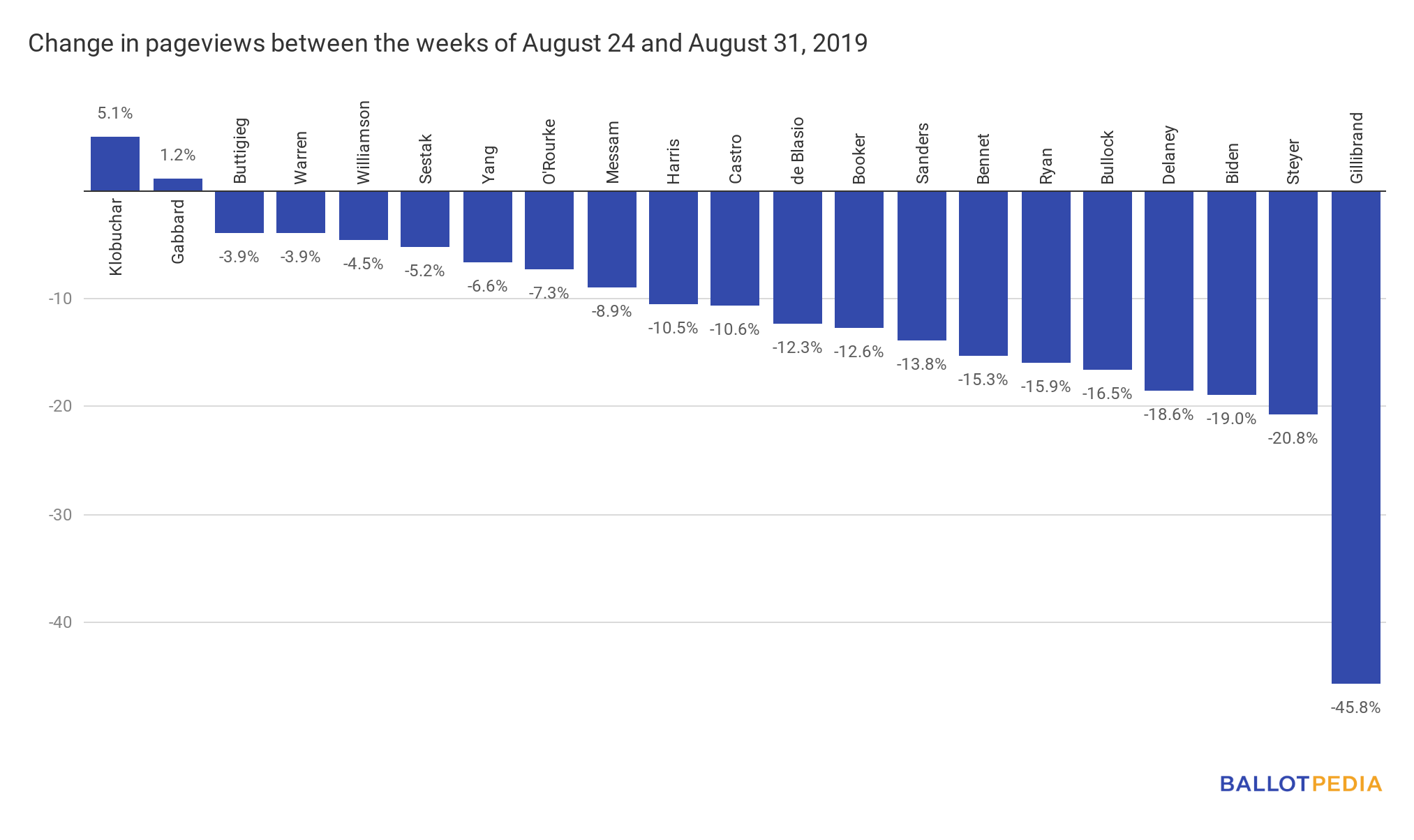 Each week, we report the number of pageviews received by 2020 presidential campaigns on Ballotpedia. These numbers show which candidates are getting our readers’ attention.
Andrew Yang’s campaign page on Ballotpedia received 5,219 pageviews for the week of August 25-31. Yang’s pageview figure represents 9.6% of the pageviews for all Democratic candidates during the week. Joe Biden had 8.1% of the pageviews for the week, followed by Elizabeth Warren with 7.7%. This is Yang’s third consecutive week with the most pageviews among Democrats.
Amy Klobuchar and Tulsi Gabbard had more Ballotpedia pageviews last week than the week before. Klobuchar’s pageviews increased by 5.1%, while Gabbard’s increased by 1.2%. The largest decrease in pageviews was 45.8% for Kirsten Gillibrand, who ended her campaign August 28.
The leader in overall pageviews this year is Pete Buttigieg with 109,047. Buttigieg is followed by Yang with 105,936 and Kamala Harris with 98,083.
On the GOP side, former Massachusetts Gov. Bill Weld had 11,641 pageviews to former Rep. Joe Walsh’s 5,638 and President Trump’s 1,868.