On July 25, the group Bluegrass Values debuted two television ads in support of Kentucky Attorney General Andy Beshear (D). These are the first ads released by the group, which is affiliated with the Democratic Governors Association, in the Kentucky gubernatorial election. Beshear faces Gov. Matt Bevin (R) and John Hicks (L) in the general election on November 5.
The following day, Putting Kentucky First launched an ad in opposition to Beshear. The Republican Governors Association-affiliated group has already released five ads opposing Beshear and one supporting Bevin during the campaign. A report from Medium Buying on July 8 said that Putting Kentucky First had spent $2 million on television ads so far.
Heading into the election, Kentucky is a Republican trifecta. This race will decide the state’s trifecta status until at least the 2020 state legislative elections. If Bevin wins, Republicans will maintain their trifecta control of the state, while a Beshear or Hicks victory would result in neither party having trifecta control.
A trifecta exists when one political party simultaneously holds the governor’s office and majorities in both state legislative chambers. Right now, there are 22 Republican trifectas, 14 Democratic trifectas, and 14 divided governments where neither party holds trifecta control. 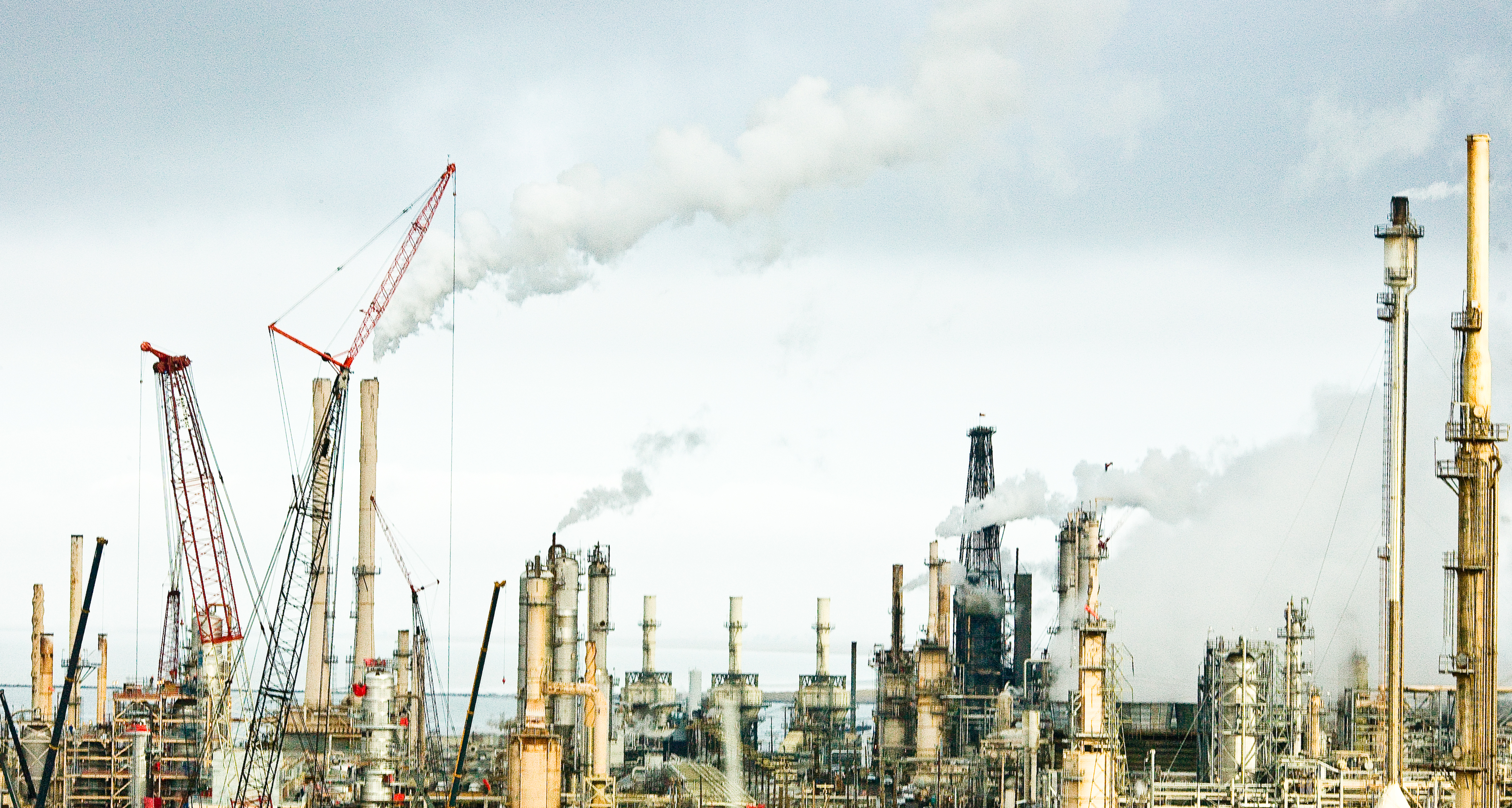 On July 25, 2019, U.S. Sen. Bernie Sanders (I-Vermont) spoke at the United Teachers Los Angeles (UTLA) Leadership Conference in Los Angeles, California, where he endorsed a ballot initiative to change how the state levies taxes on commercial and industrial properties and allocate the revenue resulting from the change to local governments and school districts. The ballot initiative has qualified for the election on November 3, 2020. UTLA is a supporter of the ballot initiative and has provided the campaign Schools and Communities First, which is behind the proposal, with $435,000.
Sen. Sanders is the first presidential candidate to endorse the ballot initiative. He said that billionaires and real estate developers shouldn’t receive tax breaks “while 500,000 people are sleeping out on the streets tonight and when our kids aren’t getting the education they deserve.”
Since 2016, Sen. Sanders has endorsed five statewide ballot measures in California, including Propositions 50, 61, and 64 in 2016 and Proposition 10 in 2018. Proposition 59, which advised the state’s officials on the electorate’s position on Citizens United v. FEC, and Proposition 64, which legalized the recreational use of marijuana, were approved. Proposition 61, which would have enacted a new regulation on drug prices, and Proposition 10, which would have expanded local rent control, were defeated.
The 2020 ballot initiative would amend the state constitution to require commercial and industrial properties, except those zoned as commercial agriculture, to be taxed based on their market value. In California, the proposal to assess taxes on commercial and industrial properties at market value, while continuing to assess taxes on residential properties based on purchase price, is known as split roll. As of 2019, Proposition 13 (1978) requires the taxable value of residential, commercial, and industrial properties to be based on 1 percent of the property’s purchase price, with an annual adjustment equal to the rate of inflation or 2 percent, whichever is lower. According to the state Legislative Analyst’s Office, market values in California tend to increase faster than 2 percent per year, meaning the taxable value of commercial and industrial properties is often lower than the market value.
Furthermore, the ballot initiative would create a process in the state constitution for distributing revenue from the revised tax on commercial and industrial properties, with 60 percent being distributed to local governments and special districts and 40 percent being distributed to school districts and community colleges.
Opponents of the ballot initiative include the California Business Roundtable, California Chamber of Commerce, and California Taxpayers Association. Rex Hime, president of the California Business Properties Association, stated, “California already has the worst climate for business and job creation in the country. A split-roll property tax will just increase pressure on many businesses that are already finding it hard to make ends meet.”
Additional reading:
https://ballotpedia.org/Bernie_Sanders
https://ballotpedia.org/Endorsements_by_Bernie_Sanders
https://ballotpedia.org/California_2020_ballot_propositions 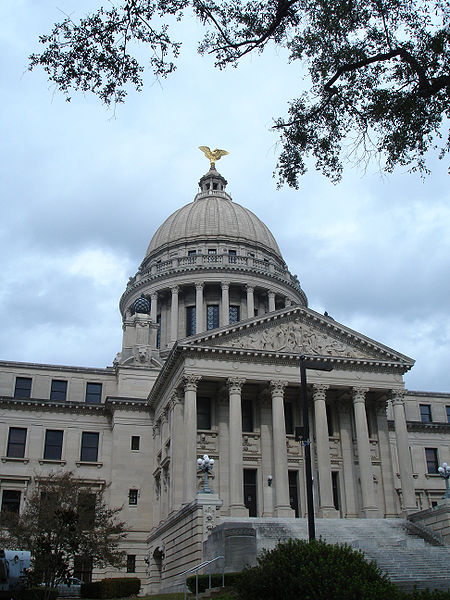 State Rep. Robert Foster, Lt. Gov. Tate Reeves, and former state supreme court Chief Justice Bill Waller Jr. are running in the August 6 Republican primary for a chance to succeed Mississippi Gov. Phil Bryant (R), who is prevented by term limits from seeking re-election. The candidates participated in the first and only scheduled televised debate of the primary July 23. Some highlights from the debate are below.
Candidates also discussed teacher pay, marijuana, the minimum wage, and the inclusion of women in the next administration.
Bryant won the past two general elections with more than 60 percent of the vote. The state’s last Democratic governor was Ronnie Musgrove, who served from 1999 to 2003. Eight candidates are running in the August 6 Democratic primary. Two of three election forecasters tracked by Ballotpedia rate the November 5 general election as “Leans Republican” and the other rated it as “Likely Republican.”

We’re currently tracking 72 pieces of legislation dealing with donor disclosure. On the map below, a darker shade of green indicates a greater number of relevant bills. Click here for a complete list of all the bills we’re tracking. 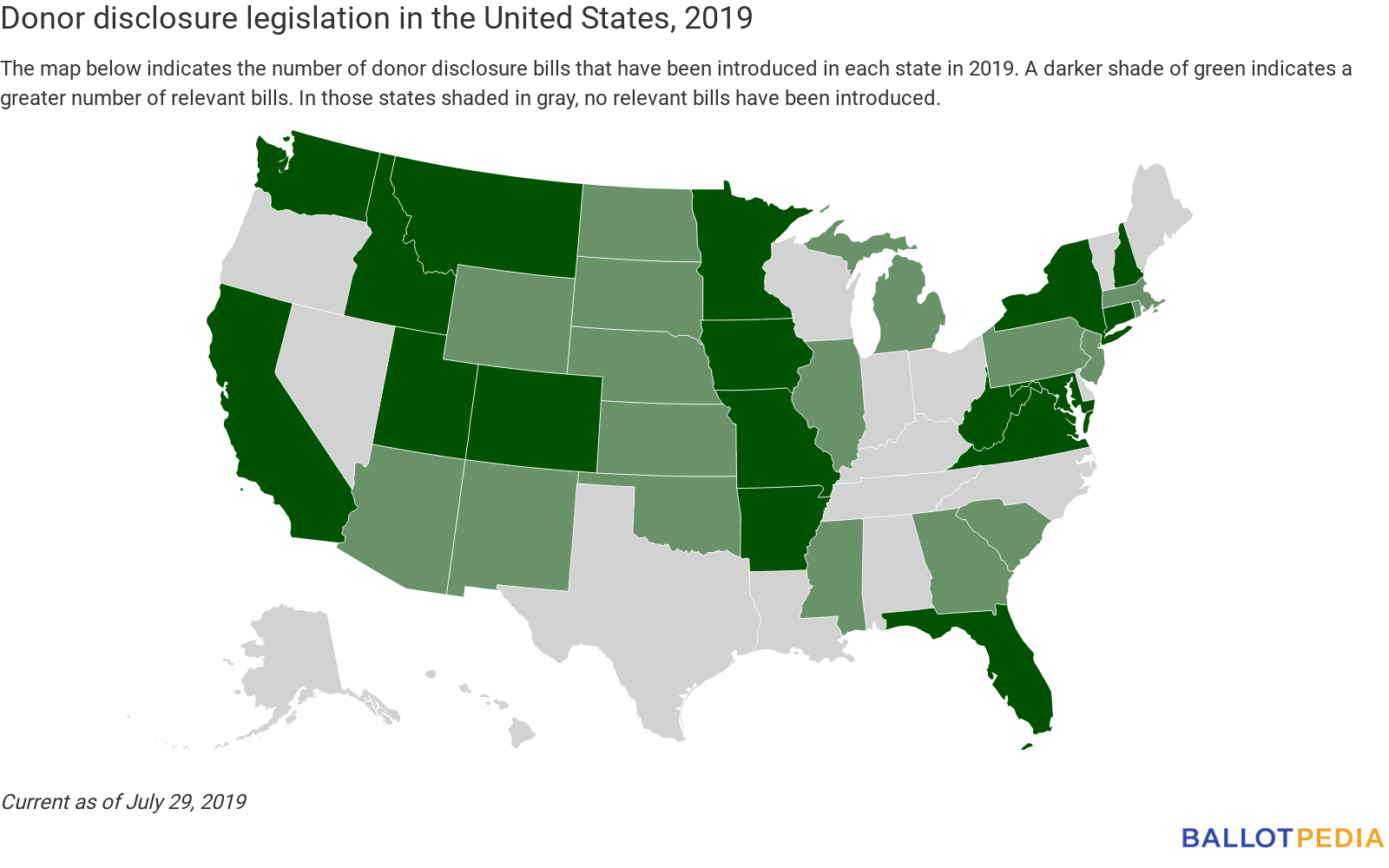 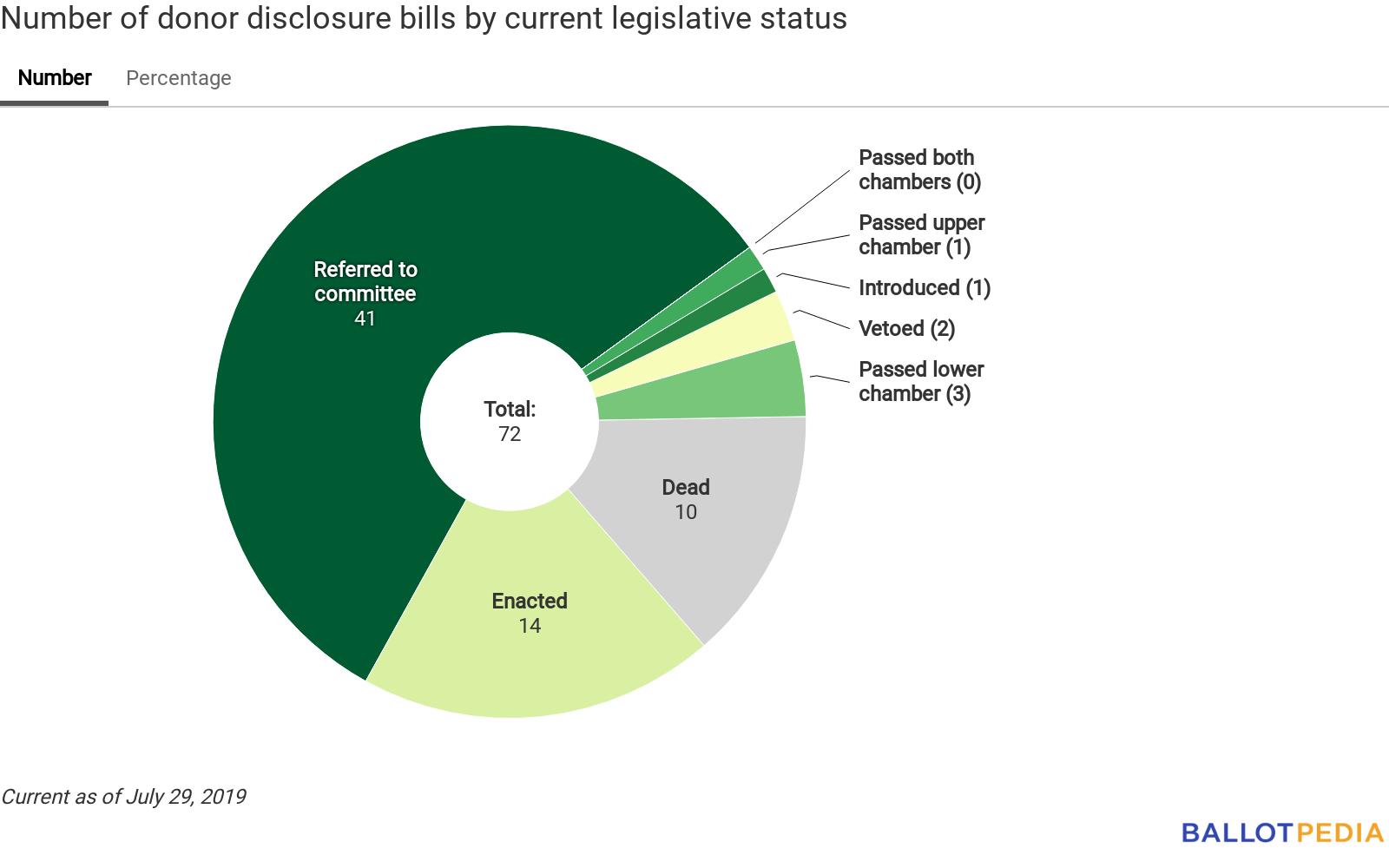 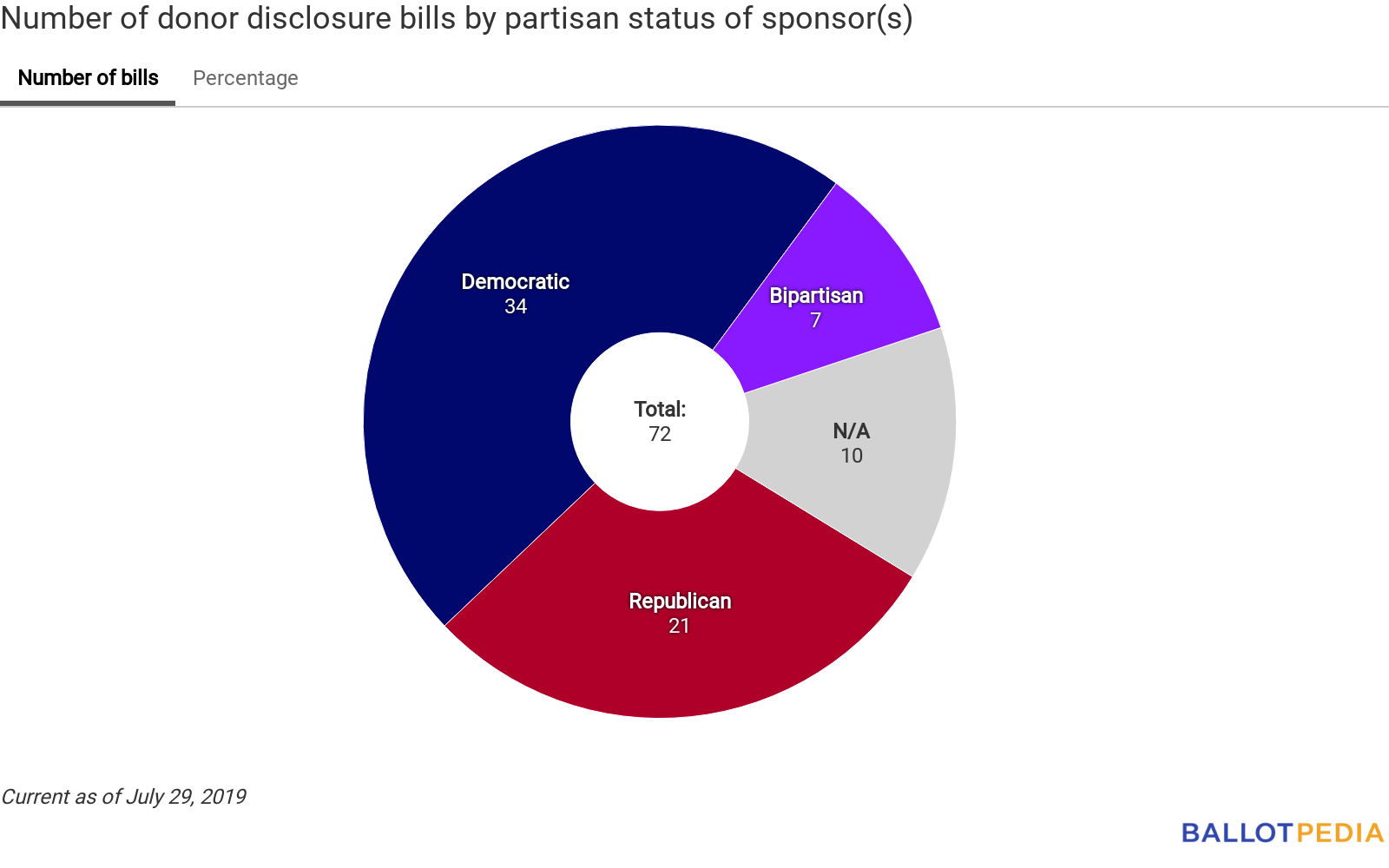 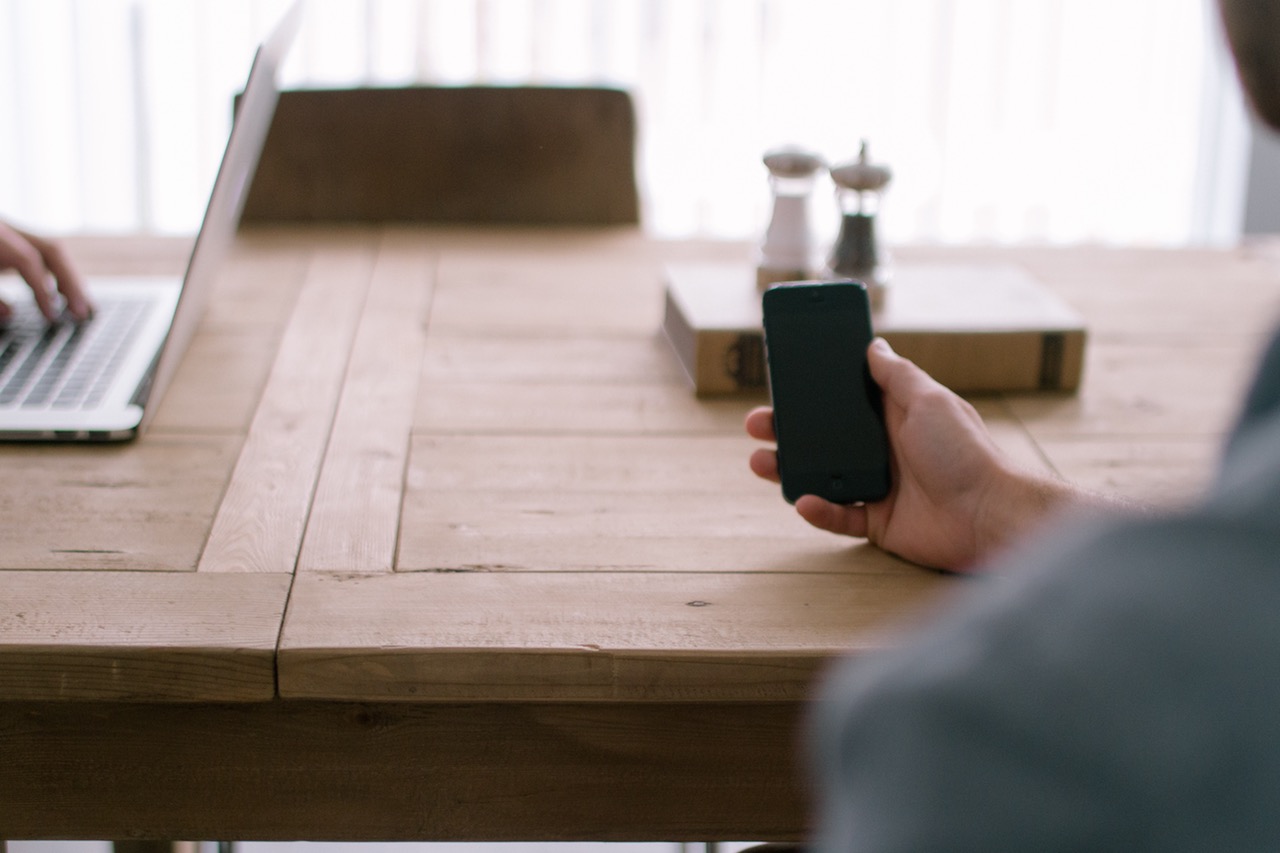 Trump administration officials asked the United States Court of Appeals for the District of Columbia Circuit to immediately lift the injunction blocking enforcement of President Trump’s (R) three civil service executive orders. Government attorneys argued that the injunction has created uncertainty and stalled collective bargaining negotiations between federal agencies and union groups.
A three-judge panel of the D.C. Circuit unanimously reversed and vacated a lower court decision that had blocked provisions of three civil service executive orders issued by President Trump (R). The judges held in their July 16 ruling that the lower court did not have jurisdiction and that the plaintiffs—a coalition of union groups—should have brought the case before the Federal Labor Relations Authority (FLRA) as required by the Federal Service Labor-Management Relations Statute (FSLMRS).
Plaintiffs have a 45-day grace period to request a rehearing in the case before the injunction is lifted. Tony Reardon, president of the National Treasury Employees Union, stated on July 24 stated that the plaintiffs plan to seek a rehearing before the full D.C. Circuit.
Additional reading:
https://ballotpedia.org/Presidential_Executive_Order_13837_(Donald_Trump,_2018)
https://ballotpedia.org/Presidential_Executive_Order_13839_(Donald_Trump,_2018)
https://ballotpedia.org/Civil_Service
https://ballotpedia.org/Civil_Service_Reform_Act
https://ballotpedia.org/Federal_Labor_Relations_Authority 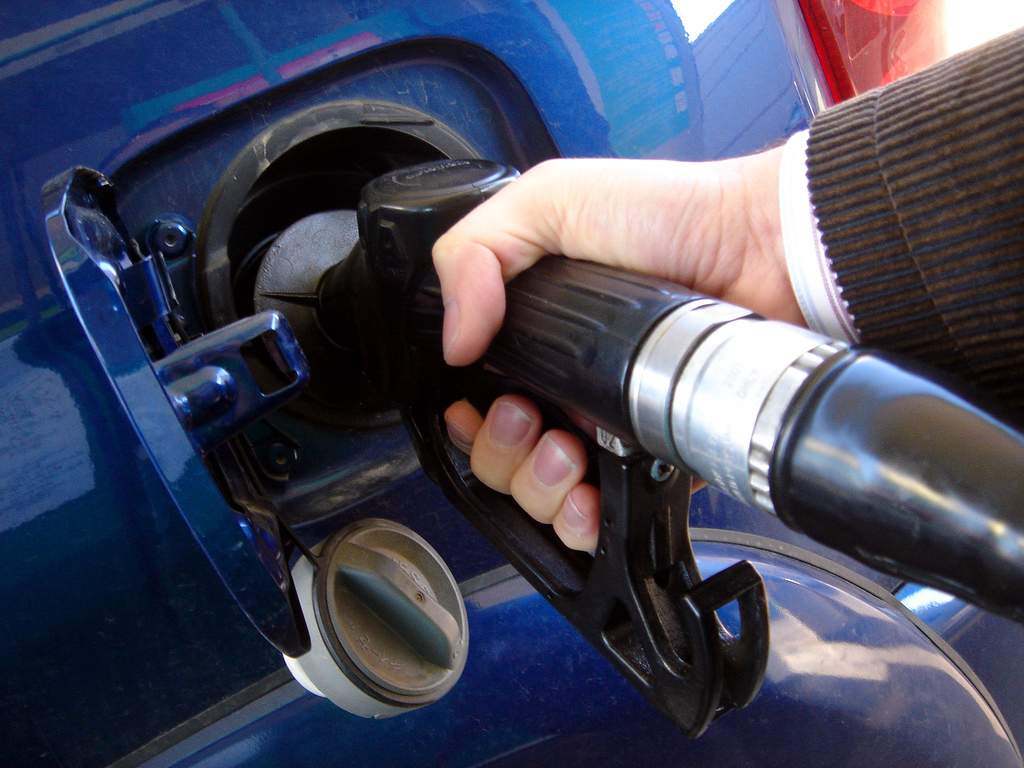 On July 24, the White House Council on Environmental Quality (CEQ) gave the public more time to comment on new guidance related to how federal agencies should address greenhouse gas emissions. The guidance tells agencies to focus on the reasonably foreseeable environmental consequences of major actions. It also tells agencies that they do not have to weigh the monetary costs and benefits of proposed actions under the National Environmental Policy Act (NEPA).
The CEQ published the draft guidance in the Federal Register on June 26 and originally scheduled a month for public feedback. After a request to extend the comment period, CEQ published a notice moving the deadline to August 26, 2019.
The CEQ guidance will replace 2016 guidance about greenhouse gas emissions. The 2016 guidance was withdrawn following President Trump’s Executive Order 13783, which directed federal agencies to review all rules related to domestic energy development and to remove any that imposed significant economic costs.
The NEPA established the CEQ inside the Executive Office of the President to coordinate agency actions that affect environmental quality and to make sure agencies comply with NEPA requirements. The NEPA requires agencies to consider the environmental consequences of proposed actions and to tell the public about how the agency makes decisions.
Guidance is a term in administrative law used to describe documents created by administrative agencies to explain rules, laws, and procedures. Guidance documents affect how agencies administer regulations and programs. However, they are not supposed to be legally binding in the same way as rules issued through the rulemaking processes of the Administrative Procedure Act.
Additional reading:
https://ballotpedia.org/Guidance_(administrative_state)
https://ballotpedia.org/National_Environmental_Policy_Act
https://ballotpedia.org/Federal_Register
https://ballotpedia.org/Rulemaking
https://ballotpedia.org/Informal_rulemaking
https://ballotpedia.org/Administrative_Procedure_Act 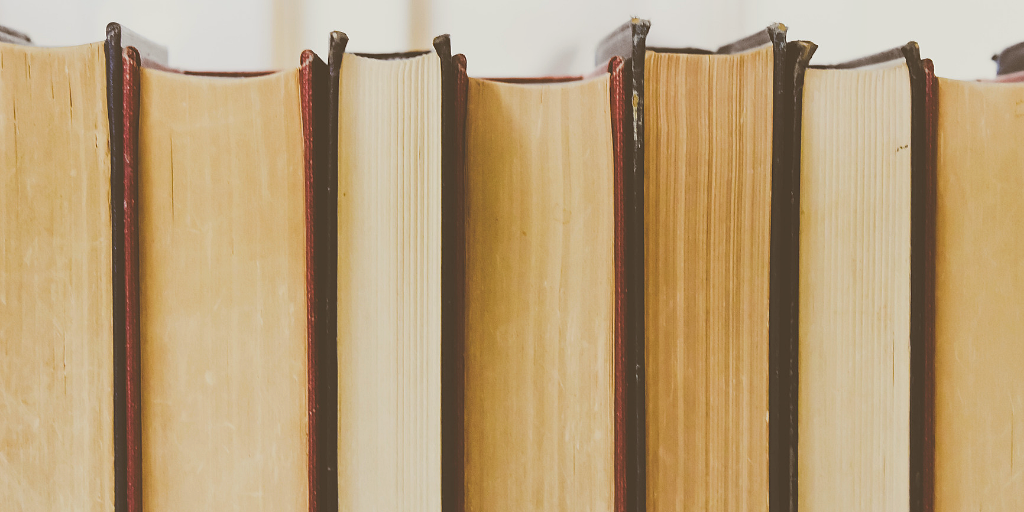