On May 18, voters in Multnomah County, Oregon, which includes Portland, approved a ballot measure to renew a property tax levy of $0.05 per $1,000 in assessed property value. Revenue will fund the Oregon Historical Society’s library, museum, and educational programs. The ballot measure received 78.5% of the vote according to unofficial election night results. The measure was put on the ballot through a vote of the Multnomah County Board of Commissioners.

The filing deadline passed on March 29.

Pennsylvania has a divided government, and no political party holds a state government trifecta. A trifecta exists when one political party simultaneously holds the governor’s office and majorities in both state legislative chambers. Republicans control the Pennsylvania State Senate by a margin of 28 to 21, with one independent. Republicans also control the state House by a margin of 113 to 90. Tom Wolf (D) is the governor.

The Republican Party of Virginia nominated Winsome Sears (R) for lieutenant governor at their May 8 convention. Sears defeated Puneet Ahluwalia (R), Lance Allen (R), Glenn Davis (R), Tim Hugo (R), and Maeve Rigler (R). She was announced as the winner on May 11 after she defeated Hugo in the fifth round of ranked-choice voting with 54.4% of the vote to Hugo’s 45.6%.

Due to coronavirus crowd-size restrictions, the 2021 Virginia Republican convention was an unassembled convention held across 39 satellite locations. Unlike previous conventions in the state, there was no limit on how many delegates could cast votes, which were weighted according to the number of delegate votes allocated to each locality.

Delegates cast a single ballot using ranked-choice voting instead of holding multiple rounds of voting. In a ranked-choice vote, voters rank their preferred options rather than picking one. Ballot-counting takes place in rounds, with each voters’ first-place preference receiving their vote in the first round. If one candidate has more than 50% of votes, they win the election outright. Otherwise, the last-place finisher is eliminated and their votes redistributed among their voters’ next choices. The process is repeated until one candidate wins more than 50%.

Sears is a U.S. Marine Corps veteran and a former member of the Virginia House of Delegates, serving from 2002 to 2004. She served on the Advisory Committee on Women Veterans to the Secretary of Veterans Affairs, as vice president of the Virginia Board of Education, and as a presidential appointee to the U.S. Census Bureau.

Four incumbents were re-elected to the Lincoln Public Schools school board in Nebraska in the nonpartisan general election on May 4. Kathy Danek (District 1), Barbara Beier (District 3), Lanny Boswell (District 5), and Don Mayhew (District 7) each won new four-year terms on the seven-member board.

The city of Lincoln, Nebraska, also held nonpartisan general elections on May 4 for three at-large seats on the city council and two at-large seats on the Lincoln Airport Authority. Six candidates, including three incumbents, competed for the city council seats. All six advanced from the April 6 primary after defeating four other candidates. Incumbents Sändra Washington and Bennie Shobe were re-elected to the city council in the general election, and newcomer Tom Beckius won his first term on the board. John Olsson and Nicki Behmer won the airport authority seats.

Lincoln Public Schools served 41,737 students during the 2017-2018 school year. Lincoln is the second-largest city in Nebraska and the 71st-largest city in the U.S. by population. 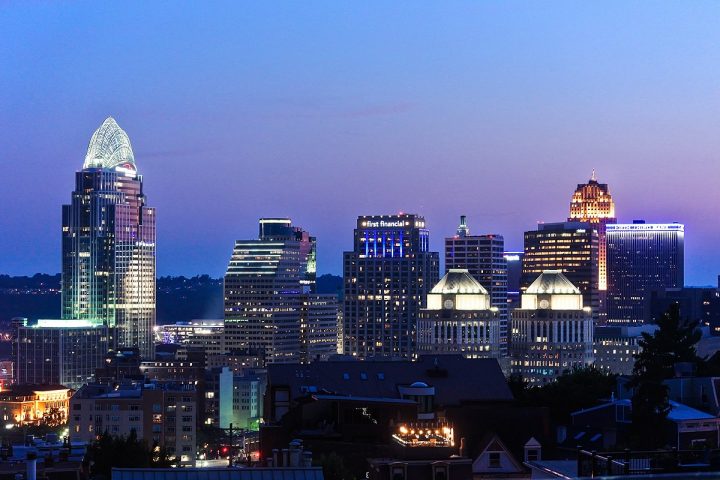 Cincinnati voters defeated Issue 3 on Tuesday with 73% of voters opposing the measure and 27% of voters approving the measure. Issue 3 was a citizen initiative that would have established the Cincinnati Affordable Housing Trust Fund and created a board of private citizens to manage the fund. It would have also provided guidelines for what projects could be financed by the fund. The measure would have required a $50 million annual city contribution to the fund, and it suggested revenue sources for the fund. The measure defined housing as affordable when “costs associated with residing in the home require no more than thirty percent of the household’s income” and contained income level thresholds of 60% and 30% of Hamilton County’s median household income.

Issue 3 was put on the ballot through a successful citizen initiative petition drive which submitted 9,541 signatures. Cincinnati Action for Housing NOW led the effort to put Issue 3 on the ballot. On Tuesday night, the campaign said, “We are a movement of people who know every person in this city needs access to a home they can afford. … Issue 3 put our need for affordable housing at the top of community conversation.”

Cincinnati voters approved two other charter amendments, Issues 1 and 2. Issue 1 was approved by a margin of 77% to 23%. It amended the city charter to prohibit council members from revising their successor designation certificates after being indicted for a felony or after the filing of certain criminal charges against them. It also requires the City Solicitor to appoint a special prosecutor to prosecute an action to remove a member of Council where a member of the council has been indicted for a felony or a criminal complaint has been filed against a member for charges relating to official conduct.

Issue 2 was approved by a margin of 77% to 23%. Issue 2 made the following changes to the charter:

• provides for the removal of council members upon conviction of or guilty plea to said crime;

• requires ethics training for council members within 60 days of taking the oath of office;

• prohibits council members from revising their successor designation certificates after being indicted for a state or federal felony related to the council member’s conduct in council duties;

Voters in Lubbock, Texas, approved Proposition A by a vote of 62% to 38% on May 1. The measure amended city ordinances to ban abortions within the city and to declare Lubbock a Sanctuary City for the Unborn.

Twenty-two other cities in Texas and two in Nebraska have also banned abortions by city ordinance. Lubbock is the largest city and the only city with an active abortion clinic to do so.

Proposition A was put on the ballot through a citizen initiative signature petition. Sanctuary Cities for the Unborn needed 3,651 signatures to qualify the measure for the ballot. On October 13, 2020, the group submitted 4,526 valid signatures.

Susan Wright (R) and Jake Ellzey (R) advanced to a runoff from a 23-candidate field in the special election to fill the vacancy in Texas’ 6th Congressional District on May 1, 2021. Since both candidates in the runoff are Republicans, the seat will not change party hands as a result of this election. As of May 2, 2021, state officials had not yet announced a runoff date.

Wright received 19.2 percent of the vote while Ellzey received 13.8 percent of the vote. The two other candidates to receive at least 10 percent were Jana Lynne Sanchez (D) with 13.4 percent and Brian Harrison (R) with 10.8 percent. Sanchez fell 354 votes short of the runoff based on unofficial results.

In this special election, Democrats earned about 37 percent of the votes cast, returning to a 2014 level for the district.

Jim Ross and Michael Glaspie advanced to a runoff from the seven-candidate field in the general election for mayor of Arlington, Texas, on May 1, 2021. Ross received 47.9% of the vote and Glaspie received 21.3% of the vote. Marvin Sutton, the third-place finisher, received 15.1% of the vote. The runoff election will take place on June 5. According to pre-general campaign finance filings, Glaspie and Ross led in fundraising, raising $47,537 and $264,712, respectively as of April 23, 2021.

Incumbent Jeff Williams (R) could not seek re-election due to term limits, leaving the position open. Mayoral elections in Arlington are nonpartisan, meaning candidates appeared on the ballot without party affiliations.

Ross owns a law firm and a local restaurant. He previously worked as an officer with the Arlington Police Department and served on the board of directors for the Arlington Police Foundation. He received endorsements from Mayor Williams (R) and former Mayor Richard Greene. He was also endorsed by four of the city’s police unions.

Glaspie was a member of the Arlington School Board from 1991 to 2008. He represented at-large District 8 on the Arlington City Council from 2012 to 2019. When he left office due to term limits, Glaspie had been serving as Arlington’s mayor pro tempore. He received endorsements from former Mayor Elzie Odom and The Dallas Morning News.

Deborah Peoples and Mattie Parker advanced to a runoff from a 10-candidate field in the nonpartisan general election for mayor of Fort Worth, Texas, on May 1, 2021. Peoples received 33.6% of the vote and Parker received 30.8% of the vote. Brian Byrd, the third-place finisher, received 14.7% of the vote. The runoff election will take place on June 5.

Incumbent Mayor Betsy Price announced on January 5, 2021, that she would not run for re-election. Mayoral elections in Fort Worth are nonpartisan, meaning candidates appeared on the ballot without party affiliations.

Peoples is the Chair of the Tarrant County Democratic Party and previously worked as a business executive. She was endorsed by U.S. House Rep. Eddie Bernice Johnson (D), The Collective PAC, Grassroots Law Project, and Higher Heights PAC. As of April 21, she raised $286,180 and spent $238,351.

Parker is an educator and previously worked as the chief of staff for the Fort Worth Mayor and City Council. She was endorsed by Mayor Price, former Mayor Mike Moncrief, the Fort Worth Star-Telegram, and The Dallas Morning News. As of April 21, she raised $1,033,304 and spent $834,823.

Ann Zadeh, Daniel Caldwell, Mylene George, Mike Haynes, Cedric Kanyinda, Steve Penate, and Chris Rector also ran in the election. They made up the largest mayoral candidate field in at least a decade.

In the lead-up to the election, media coverage focused on Nirenberg, Brockhouse (who previously ran against Nirenberg in 2019 and lost by 2.2% in the runoff election), and Denise Gutierrez-Homer. Brockhouse and Gutierrez-Homer both disagreed with Nirenberg’s response to the pandemic, including mask mandates and business restrictions. Proposition B, a ballot measure repealing local authority for collective bargaining with the San Antonio Police Officers Association to negotiate wages, healthcare, leave, and other policies, was also an issue in the race. Nirenberg said that the issue was best left to voters, while Brockhouse and Gutierrez-Homer both opposed it.

The mayor is a member of the city council. He or she presides over council meetings and official city ceremonies. The mayor also represents the city on the state, national and international levels.