In this month’s edition of Checks and Balances, we review the potential implications of the coronavirus pandemic for the repeal of agency rules under the Congressional Review Act; President Donald Trump’s (R) executive order concerning procedural rights in administrative adjudication; a new quorum at the Federal Election Commission; and an order from the Pipeline and Hazardous Materials Safety Administration that highlights the role of federal agency in preemption decisions.

At the state level, we review a Wisconsin Supreme Court decision that struck down the state’s stay-at-home order, litigation across the country challenging executive orders that limit religious gatherings in response to the coronavirus pandemic, and a lawsuit in Maine that questions whether voters can overturn state agency orders.

We also highlight a review of administrative law scholar Richard Epstein’s new book The Dubious Morality of Modern Administrative Law as well as new findings from Ballotpedia’s survey of all 50 state constitutions and administrative procedure acts regarding the executive power to remove agency officials. As always, we wrap up with our Regulatory Tally, which features information about the 192 proposed rules and 236 final rules added to the Federal Register in May and OIRA’s regulatory review activity.

Coronavirus could allow next Congress to block more administration regulations

The Dubious Morality of Modern Administrative Law, a new book by law professor Richard Epstein, questions whether modern administrative law is immoral. In a review by fellow law professor Jonathan Adler for National Review, Adler observes that Epstein’s book focuses on what the author deems to be the inadequate legal constraints governing administrative agencies rather than other critical concepts, such as the nondelegation doctrine. Epstein also expresses his opposition to Chevron deference, which he claims allows agencies to alter regulatory interpretations without legislative approval.

Adler finds Epstein’s arguments “engaging, if not always convincing,” and arrives at the following conclusion:

“The ultimate challenge for authors such as Epstein is how to make peace with the administrative state without abandoning a commitment to the rule of law. As Epstein observes, “Fuller’s rule-of-law requirements are more easily satisfied under a classical liberal system of contract, property, tort, and eminent domain than under any modern progressive system.” That is true enough, but even if a wholesale deconstruction of the administrative state were desirable, it is not on the table. Instead the task before us is to maximize the benefits of administration while minimizing the costs, economic and ethical. In this regard, Epstein is to be commended for recognizing the need to consider the contours of an achievable reform agenda, even if he is not wholly successful in the ultimate execution.”

Ballotpedia surveyed all 50 state constitutions and administrative procedure acts (APAs) to learn whether governors had removal powers similar to the President of the United States.

26 states, 52%, have constitutions that grant executive removal power to the governor 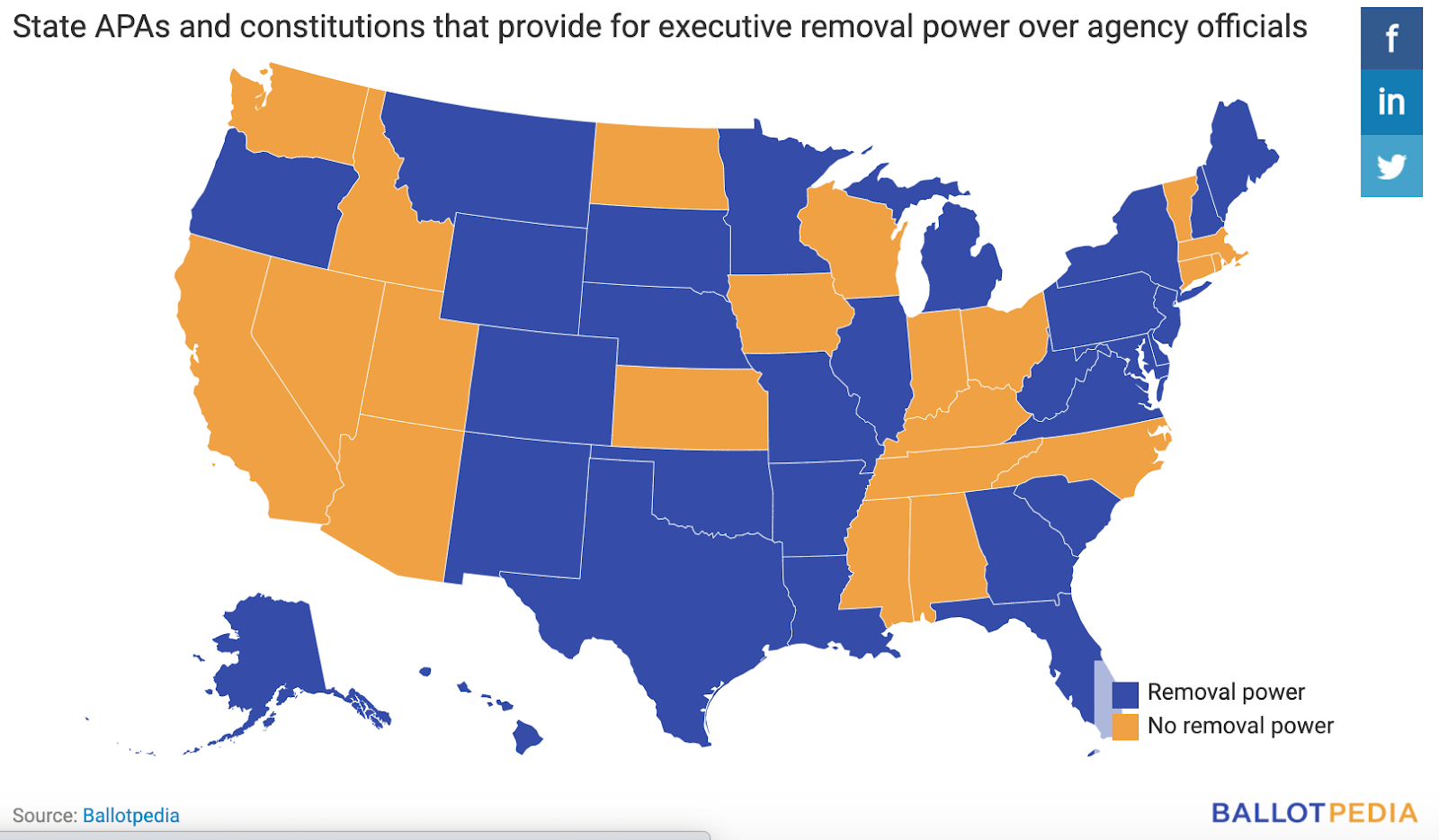 Additional findings showed that the Florida Constitution provides that some officers serve at the pleasure of the governor, some require senate or cabinet approval before the governor may remove them, and some can only be removed by the governor for cause.