What is changing in the next two days?

What is open in each state? For a continually updated article on reopening status in all 50 states, click here. For our last edition, click here.

All 50 states are reopening in some way. Here, we give the status of one industry or activity across the states. Today’s question: what is the indoor gathering size limit in each state?

We last looked at indoor gathering size limits in the July 21st edition of the newsletter. Since then:

The following is an overview of gathering limits by state: 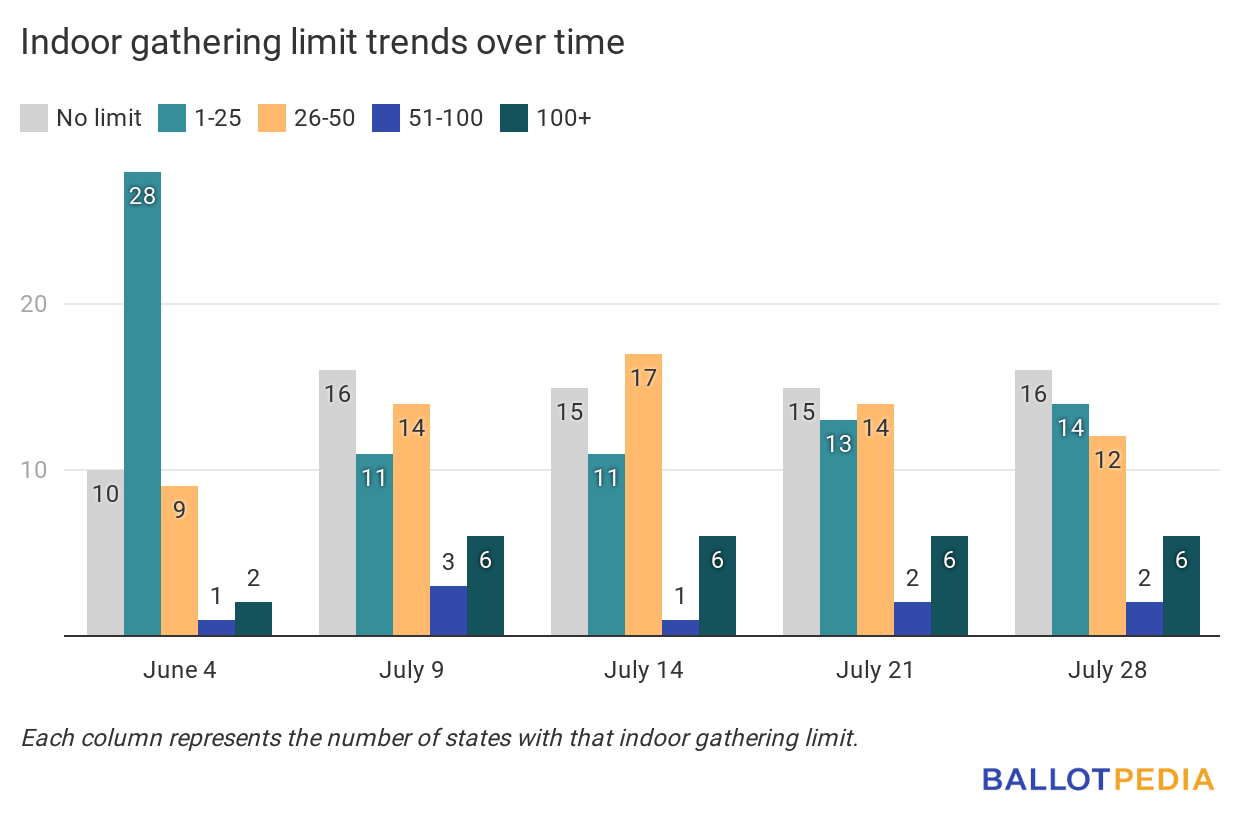 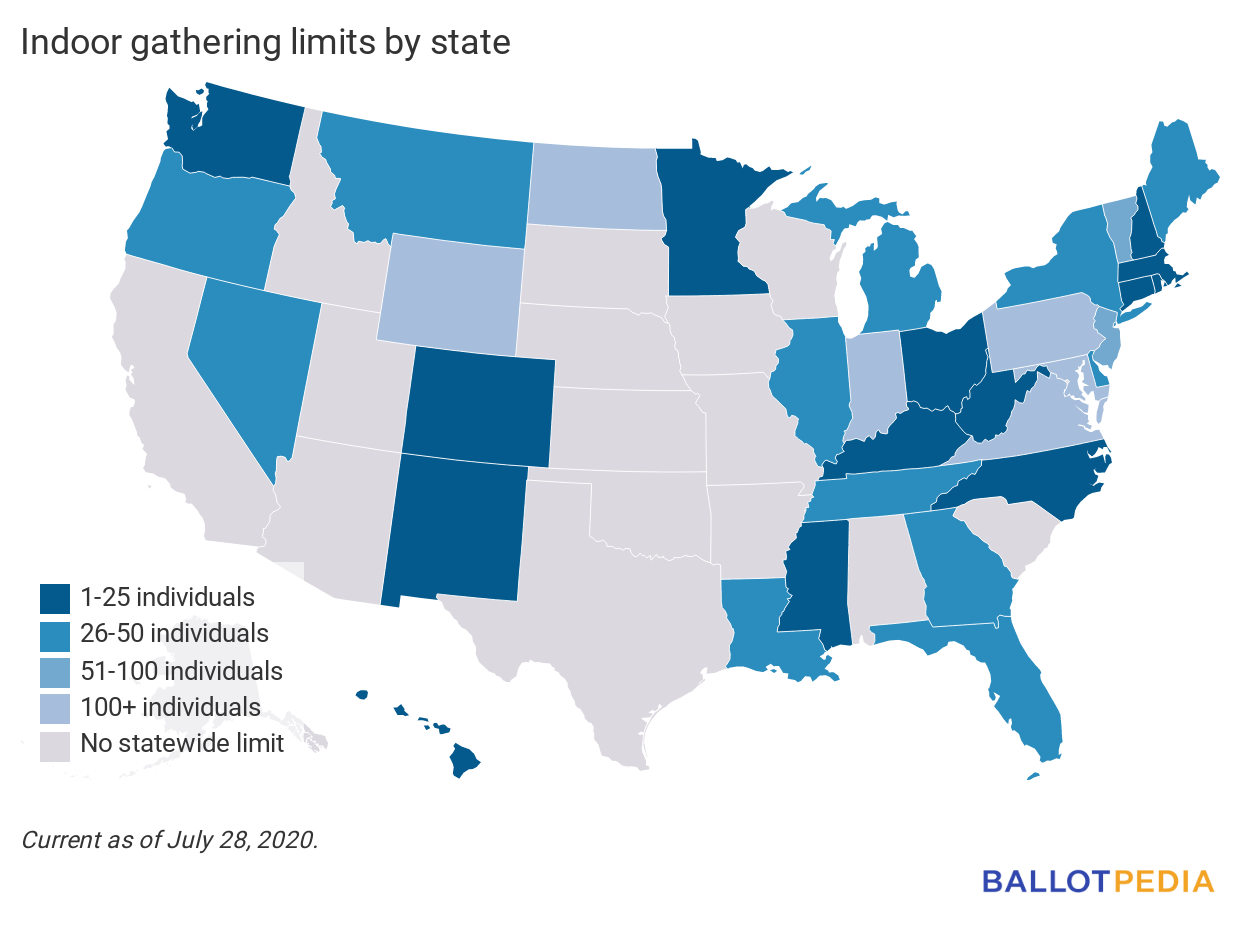 This is an in-depth summary of two state plans to reopen public K-12 schools for the 2020-2021 school year.

The Kansas State Department of Education released school reopening guidance on July 13. The plan contains recommendations and consideration for schools and districts. It does not discuss requirements. The document’s introduction says, “The purpose of this document is not to prescribe what schools should do, but rather what considerations and discussions should happen in schools as they plan to support their students and communities as they navigate the uncharted waters of providing a quality education during the COVID-19 pandemic.”

Kansas does not have an official date for public schools to reopen—individual districts can set their own timelines. According to EdWeek, public schools in Kansas traditionally start the academic year in mid-August, with the exact start date varying by district.

On March 27, Gov. Laura Kelly (D) closed K-12 schools in the state from March 23 through May 31, effectively ending the school year.

The following tables show public education statistics in Kansas, including a rank comparing it to the other 49 states. Rank one is the highest number of each figure, rank 50 is the lowest. All data comes from the Common Core of Data provided by the National Center for Education Statistics.

The plan contains recommendations for schools conducting on-site, hybrid, and remote operations. Schools and districts are encouraged to consider which method is appropriate for their communities and make changes to their schedule throughout the school year as circumstances allow.

On July 20, Gov. Kelly (D) signed an executive order requiring everyone five years of age and older entering private and public schools to wear a face covering. On July 23, Attorney General Derek Schmidt (R) said local school districts and counties have the constitutional authority to opt-out of the mask order. The governor has maintained that local governing bodies cannot opt-out of the order.

The Department of Education plan encourages school districts to require students and faculty to wear face coverings whenever cohorting and social distancing measures cannot be practiced. It contained the following recommendations:

Transportation and busing requirements and restrictions

The Department of Education suggested the following general recommendations for transporting students in buses and other school vehicles:

Kentucky does not have a statewide date for public schools to reopen. According to EdWeek, public schools in Kentucky traditionally start the academic year in August, with the exact date varying by district.

The following tables show public education statistics in Kentucky, including a rank comparing it to the other 49 states. Rank one is the highest number of each figure, rank 50 is the lowest. All data comes from the Common Core of Data provided by the National Center for Education Statistics.

Districts must use state guidance to develop their own reopening plans. The guidance says state plans should evolve over time and “districts should work closely with their local health departments and other partners to ensure their policies, procedures and protocols align with the current scientific information.”

The guidance does not say if state-approved plans must be made publicly available.

The guidance released in June and July does not say what sort of model districts must use for learning. The initial guidance released in May asked schools to “prepare for three contingencies for the start of the school year: an early opening, a traditional opening and a late opening” based on local conditions.

The guidance recommends that staff and all students in first grade or older should wear a cloth mask unless the student has a medical exemption. The following guidelines for masks are also included:

The guidance includes the following safety expectations for schools:

Transportation and busing requirements and restrictions

The guidance says students should wear masks on the bus unless they have a medical waiver. It recommends that passengers from the same household be seated together and that staggered, arranged seating be used.

In this section, we feature examples of other federal, state, and local government activity, as well as influencers relevant to recovering from the pandemic.