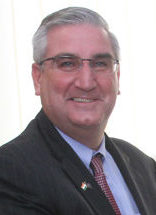 The COVID-19 pandemic was a major issue in this race. Gov. Holcomb said he led a data-driven response, protected Indianans’ health, and reopened responsibly, while Myers emphasized his background as a doctor and a former state health commissioner.

Rainwater criticized Holcomb over the state’s mask mandate and restrictions on businesses and churches, saying they should never have been shut down.

Heading into the election, Indiana was a Republican trifecta, meaning Republicans controlled the governorship and both chambers of the state legislature.

The outcomes of the 2020 election cycle in Indiana could influence the state’s redistricting process following the 2020 census since, in Indiana, the state legislature is responsible for drafting both congressional and state legislative district plans.

District plans are subject to a governor’s veto.