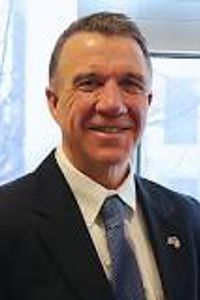 Incumbent Phil Scott (R) defeated Lt. Gov. David Zuckerman (D/Vermont Progressive Party) and six independent and third-party candidates to win a third two-year term as governor of Vermont. Vermont is one of three states (along with North Carolina and Louisiana) with a governor and lieutenant governor from different parties. It is also one of four states that voted for Hillary Clinton (D) in 2016 and has a Republican governor.

Scott is one of two Republicans who won an election for governor in 2016 as Hillary Clinton carried their state in the presidential election. The other such governor, Chris Sununu (R) of neighboring New Hampshire, also won a third term tonight.

Scott’s win retains the Republican Party’s hold on the governorship and prevents Democrats from gaining a trifecta in Vermont this year. Heading into the election, Vermont was one of 14 states with a divided government, as Democrats controlled both chambers of the state legislature and Republicans the governorship. As of Scott’s win, control of the state legislature remained too close to call; all 30 state Senate seats and all 150 state House seats are up for election.