The Supreme Court will begin its March sitting during the week of March 22 via teleconference with live audio. The court is conducting proceedings this way in accordance with public health guidance in response to COVID-19. SCOTUS will hear arguments in nine cases for a total of seven hours of oral argument.

On March 5, the court’s Public Information Office reported that all nine justices had been vaccinated against COVID-19.

Click the links below to preview the cases on the docket for the March sitting:

SCOTUS accepted two cases since our March 1 issue, for a total of two hours of oral argument. The cases will be scheduled for argument during the court’s 2021-2022 term, which is slated to begin on October 4, 2021. To date, the court has accepted seven cases for the upcoming October term.

José Luis Vaello-Madero, a Puerto Rican-born United States citizen, was receiving SSI benefit payments while living in New York. Vaello-Madero returned to Puerto Rico to care for his wife, who had taken ill. The Social Security Administration (SSA) discontinued his benefits based on a statutory requirement that an SSI beneficiary live within the 50 U.S. states, the District of Columbia, or the Northern Mariana Islands.

The federal government filed suit in the U.S. District Court for the District of Puerto Rico for repayment of benefits Vaello-Madero received after moving to Puerto Rico. Vaello-Madero raised an affirmative defense that the SSI statute violated his right to equal protection under the Fifth Amendment because it excluded Puerto Rico residents. The district court ruled in Vaello-Madero’s favor, holding that Congress had no rational basis for discriminating against U.S. citizen residents in Puerto Rico in passing the SSI provisions. On appeal, the U.S. Court of Appeals for the 1st Circuit affirmed, or upheld, the ruling. Click here to learn more about the case’s background.

The federal government petitioned the Supreme Court for review and asked the court: “Whether Congress violated the equal-protection component of the Due Process Clause of the Fifth Amendment by establishing Supplemental Security Income-a program that provides benefits to needy aged, blind, and disabled individuals-in the 50 States and the District of Columbia, and in the Northern Mariana Islands pursuant to a negotiated covenant, but not extending it to Puerto Rico.”

Upon his retirement, Babcock applied for Social Security benefits. The SSA granted Babcock’s application but reduced his benefits since he also received CSRS pension payments. Babcock asked the SSA to reconsider, citing the SSA’s uniformed services exception and arguing that his pension plan was covered. The SSA did not change its determination. On appeal, an administrative law judge and the SSA Appeals Council upheld the determination. Babcock filed suit in the U.S. District Court for the Western District of Michigan.

In Babcock’s case, the Western District of Michigan ruled that his uniformed service did not qualify under the exception. On appeal, the U.S. Court of Appeals for the 6th Circuit affirmed that ruling. Click here to learn more about the case’s background.

Babcock appealed to the Supreme Court, asking: “Is a civil-service pension payment based on dual-status military technician service to the National Guard a payment based wholly on service as a member of a uniformed service?”

SCOTUS issued two opinions since our March 1 issue. The court has issued 18 opinions so far this term. Four cases were decided without argument.

On March 4, the U.S. Supreme Court issued opinions in the following cases:

In a 7-2 opinion, the court reversed the 9th Circuit’s ruling and remanded the case for further proceedings. The court ruled that FOIA’s Exemption 5, or its deliberative process privilege, protects in-house draft biological opinions made during deliberation and before a final decision, including when the draft reflects the agencies’ final views about a proposal.

A biological opinion is a document stating the U.S. Fish and Wildlife Service and/or the National Marine Fisheries Service’s opinion on whether a federal agency action is likely to harm listed species or critical habitat.

In a 5-3 ruling, the court affirmed the 8th Circuit’s judgment. The court ruled that to cancel a lawful removal order, a nonpermanent resident must show they have not been convicted of a disqualifying offense under the INA. The petitioner did not meet that burden of proof because it was unclear whether a disqualifying offense was used as part of his conviction.

Justice Neil Gorsuch wrote the majority opinion, his first of the current term. Justice Stephen Breyer filed a dissenting opinion, joined by Justices Sonia Sotomayor and Elena Kagan. Justice Amy Coney Barrett took no part in the consideration or decision of the case.

In what year was the Supreme Court Building, SCOTUS’ permanent home, built?

Eleven judges left active status, creating Article III life-term judicial vacancies, since the last vacancy count. As Article III judicial positions, the president nominates a replacement to fill the vacancies. Nominations are subject to confirmation on the advice and consent of the U.S. Senate.

The following map shows the number of vacancies in the United States District Courts as of March 1, 2021.

As of March 1, 2021, President Joe Biden (D) had not announced any new nominations. The average number of judicial appointees per president through March 1 of their first year is zero.

In a March 1 interview in The New York Times, Senate Judiciary Committee Chairman Sen. Dick Durbin (D-IL) said he would adhere to the precedent established by his predecessors–Sen. Lindsey Graham (R-S.C.), chairman during the 116th Congress, and Sen. Chuck Grassley (R-IA), chairman during the 115th Congress–and follow the blue-slip tradition for district court nominees but not for circuit court nominees. Durbin said he might reconsider following the blue slip tradition with district court nominees. Click here to learn more about the blue slip policy for federal judicial nominations.

As of March 1, 2021, there have been no federal judicial confirmations during the Biden administration.

As of March 1 of the first year of President Donald Trump’s presidency, the U.S. Senate had not confirmed any Article III judicial nominees.

This edition of Bold Justice sends us back to the first decade of the new millennium as we continue our travels through the history of past presidential administrations’ federal judicial appointments. Today, we’re taking a look at President George W. Bush’s (R) judicial nominees. 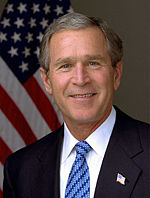 During his two terms in office, President Bush made 340 judicial appointments. Of those, 328 were Article III judges. Among the most notable are Supreme Court Chief Justice John Roberts and Justice Samuel Alito.

When President Bush assumed office in January 2001, he inherited 84 life-term vacancies out of 862 total Article III judgeships (9.74%), the third-highest vacancy percentage since the inauguration of President Ronald Reagan (R) in January 1981.

Of his Article III appointees–not including Supreme Court nominations–Bush appointed 63 judges to the United States Courts of Appeal, 261 judges to U.S. district courts, and two judges to the U.S. Court of International Trade.

We’ll be back on March 22 with a new edition of Bold Justice. Until then, gaveling out!