On March 5, the court’s Public Information Office announced that all of the justices had been fully vaccinated.

On March 19, the court held its first in-person conference since last spring. Some of the justices participated remotely.

The Supreme Court begins its March sitting the week of March 22 via teleconference and will provide audio livestreams of the argument sessions. The court is conducting proceedings this way in accordance with public health guidance in response to COVID-19. SCOTUS will hear arguments in seven cases for a total of six hours of oral argument.

Click the links below to read more about the specific cases before SCOTUS during the first week of its March sitting.

In 2015, organizers from the United Farm Workers (UFW) union tried to gain access to two corporations’ worksites–Cedar Point Nursery and Fowler Packing Company, collectively known as “The Growers”–and later filed complaints against The Growers, citing unfair labor practices and blocking the organizers’ access to the workers.

In 2016, The Growers filed a complaint in U.S. District Court against the Board, seeking to bar enforcement of the access regulation on their worksites and challenging the regulation’s constitutionality. The district court denied the request and dismissed the complaint. On appeal, the 9th Circuit affirmed, or upheld the district court’s ruling.

The questions presented: “Whether the uncompensated appropriation of an easement that is limited in time [is effectively] a per se physical taking under the Fifth Amendment.”

Cooley was arrested and indicted in the U.S. District Court for the District of Montana. The district court granted Cooley’s motion to suppress evidence from Saylor’s search, ruling that Saylor conducted an “unreasonable search and seizure” under the Indian Civil Rights Act. The U.S. government appealed to the U.S. Court of Appeals for the 9th Circuit. The court affirmed the district court’s ruling.

The questions presented: Were the lower courts wrong to suppress evidence on the theory that an Indian tribe police officer was unauthorized to detain and search a non-Indian based on a potential violation of state or federal law while on a public right-of-way in an Indian reservation?

In 2015, Edward Caniglia and his wife argued at their home in Cranston, Rhode Island. During the argument, Caniglia retrieved an unloaded gun from their bedroom. Mrs. Caniglia spent the night at a nearby hotel. The next day, Mrs. Caniglia called the police to request a wellness check on her husband and an escort home.

At the home, the sergeant determined Caniglia was imminently dangerous to himself and others. The police requested Caniglia go to a nearby hospital for a psychiatric evaluation. Caniglia complied, later alleging he did so based on a police promise that his guns would not be confiscated. The sergeant seized firearms and ammunition from the home.

Later, Caniglia made several attempts to retrieve his firearms from the police department. His requests were denied. Caniglia filed suit in district court against the police department and city officials, alleging violations of his rights under the U.S. Constitution and state law. The firearms were returned to Caniglia. The U.S. District Court for the District of Rhode Island granted the defense’s motion for summary judgment on Caniglia’s legal claims and held that the police officers’ seizures were protected under the Fourth Amendment’s community caretaking exception. On appeal, the 1st Circuit upheld the district court’s ruling.

The question presented: “Whether the ‘community caretaking’ exception to the Fourth Amendment’s warrant requirement extends to the home.”

To date, all but one of the cases accepted for argument during this term have been scheduled. Six cases were removed from the argument calendar. One case, Terry v. United States, will be rescheduled later in the term. The court has agreed to hear 63 cases in total during its October 2020-2021 term.

The following list of cases is organized by scheduled argument date:

SCOTUS issued one opinion since our March 8 issue. The court has issued 19 opinions so far this term. Four cases were decided without argument.

On March 8, the court issued an opinion in Uzuegbunam v. Preczewski which concerned nominal damages claims and whether they provide legal standing in federal cases. Nominal damages claims are when a judge finds in favor of one party in a lawsuit but concludes that no real harm was done and awards a very small, or nominal, amount of monetary relief.

In an 8-1 ruling, the court held that awarding nominal damages provides legal standing in a case, meaning that the plaintiff has the legal right to sue. Justice Clarence Thomas delivered the majority opinion of the court and Justice Brett Kavanaugh filed a concurring opinion. Justice Thomas has authored three majority opinions during the current term.

Chief Justice John Roberts filed a dissenting opinion, concluding that nominal damages claims are not a sufficient basis for Article III legal standing in a case. This was Roberts’ first dissenting opinion in a case argued during the 2020-2021 term as well as his first lone, or solitary, dissent since joining the court in 2005.

SCOTUS accepted one case since our March 8 issue, to be scheduled for argument during the upcoming October 2021-2022 term. The court has granted review in a total of eight cases for the term, which is scheduled to begin on October 4, 2021.

Thompson v. Clark concerns the Supreme Court’s favorable termination rule for plaintiffs suing for unconstitutional conviction or imprisonment and burden of proof requirements in cases of unlawful warrantless entry under the Fourth Amendment. Thompson originated from the U.S. Court of Appeals for the 2nd Circuit.

Following that decision, circuit courts have differed on the definition of “favorable termination.”. Some circuits hold that plaintiffs must clearly be found innocent—a higher standard—while others hold that the judgment simply must not be inconsistent with the plaintiff’s innocence.

The questions presented in Thompson v. Clark are:

SCOTUS is scheduled to begin its next term on October 4, 2021. Which of the following start dates have been used during previous SCOTUS terms?

a) The first Monday in October

b) The first Monday in February

c) The second Monday in October

d) All of the above

The federal judiciary currently has 72 vacancies. As of publication, there were no pending nominations.

Welcome to the ‘90s! This edition of Bold Justice takes us back to a time when the Chicago Bulls were a reigning dynasty on the basketball court, when we caught our first Pokémon, and when we realized that our hearts would go on. Today, we’re taking a look at President Bill Clinton’s (D) judicial nominees. 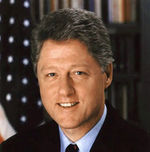 During his term of office, President Clinton made 387 successful judicial appointments where the nominee joined the court. Of those appointments, 378 were Article III judges. Among the most notable of these are Supreme Court justices Ruth Bader Ginsburg and Stephen Breyer.

When President Clinton assumed office in January 1993, he inherited 111 life-term vacancies out of 842 total Article III judgeships (13.18%), the highest vacancy percentage since the inauguration of President Ronald Reagan (R) in January 1981.

Of his Article III appointees–not including Supreme Court nominations–Clinton appointed 66 judges to the United States Courts of Appeal, 305 judges to U.S. district courts, and five judges to the U.S. Court of International Trade.

We’ll be back on March 29 with a new edition of Bold Justice. Until then, gaveling out!