Click the links below to read more about the specific cases before SCOTUS during the first week of its April sitting.

The question presented: “Whether Alaska Native regional and village corporations established pursuant to the Alaska Native Claims Settlement Act are “Indian Tribe[s]” for purposes of the CARES Act, 42 U.S.C. 801(g)(1).”

Note: When SCOTUS originally accepted the case, the case name was Mnuchin v. Confederated Tribes of the Chehalis Reservation, because Steven Mnuchin was the U.S. Secretary of the Treasury at that time.

The question presented: “Whether, under 8 U.S.C. § 1254a(f)(4), a grant of Temporary Protected Status authorizes eligible noncitizens to obtain lawful-permanent-resident status under 8 U.S.C. §1255.”

Note: When SCOTUS originally accepted the case, the case name was Sanchez v. Wolf, because Chad Wolf was the acting secretary of the U.S. Department of Homeland Security at that time.

In 2018, Gregory Greer was convicted of possession of a firearm, a felony offense. Greer appealed to the U.S. Court of Appeals for the 11th Circuit, arguing that the law was unconstitutional, based on the U.S. Supreme Court’s decision in Rehaif. In Rehaif, the court held that in order to convict an individual of unlawful possession of a firearm, prosecutors must prove the individual knew they possessed a firearm and knew they were barred from doing so.

The question presented: “Whether when applying plain-error review based upon an intervening United States Supreme Court decision, a circuit court of appeals may review matters outside the trial record to determine whether the error affected a defendant’s substantial rights or impacted the fairness, integrity, or public reputation of the trial?”

In 2017, Michael Andrew Gary was arrested twice for felony possession of a firearm by a convicted felon. Gary was indicted in U.S. district court for the offenses under Title 18 of the United States Code and he pled guilty. During his plea hearing, Gary’s legal counsel did not tell Gary that an additional element of the offense was that he possessed the firearm while knowing he was prohibited from doing so. Gary appealed his sentence to the U.S. Court of Appeals for the 4th Circuit and the court vacated his plea and convictions. The United States petitioned the court for a rehearing and the 4th Circuit denied the request.

The question presented: “Whether a defendant who pleaded guilty to possessing a firearm as a felon, in violation of 18 U.S.C. 922(g)(1) and 924(a), is automatically entitled to plain-error relief if the district court did not advise him that one element of that offense is knowledge of his status as a felon, regardless of whether he can show that the district court’s error affected the outcome of the proceedings.”

A class of 173 Texas municipalities filed a lawsuit against several online travel companies (“OTCs”) alleging that the OTCs had not paid and/or had underpaid municipal taxes emanating from the OTCs’ service fees.

Hologic filed patent infringement claims against Minerva in U.S. district court. Minerva filed review claims for the patents with the U.S. Patent and Trademark Office. The office found that one patent was not patentable, meaning that the invention could not be patented, and the U.S. Court of Appeals for the Federal Circuit upheld the ruling. Hologic argued Minerva could not challenge the claims’ validity based on the doctrine of assignor estoppel. Both parties cross-appealed to the Federal Circuit. The court affirmed-in-part and vacated-in-part the U.S. district court’s orders.

The question presented: “Whether a defendant in a patent infringement action who assigned the patent, or is in privity with an assignor of the patent, may have a defense of invalidity heard on the merits.”

SCOTUS has not issued any opinions in cases argued this term since our April 12 issue. The court has issued 26 opinions to date. Five cases were decided without argument.

On April 9, SCOTUS blocked California from enforcing restrictions on in-home religious gatherings that were originally imposed due to the coronavirus pandemic in the case Tandon v. Newsom. Justice Elena Kagan wrote a dissenting opinion, joined by Justices Stephen Breyer and Sonia Sotomayor, concluding that because the California law treated both secular and religious in-home gatherings equally, the injunction should be denied.

To date, President Biden has announced his intent to nominate 10 individuals to Article III judgeships.

The official nominations of these judges have not been submitted to the U.S. Senate as of this writing.

The federal judiciary currently has 77 vacancies, 73 of which are for lifetime Article III judgeships. As of this writing, there were 10 pending Article III nominations.

It’s time to feather our hair and put on our boogie shoes because we’ve crossed into the 1970s! Before you tune into Weekend Update with Jane Curtin or put on Star Wars (The Empire Strikes Back, of course), let’s take a look at President Jimmy Carter’s (D) judicial nominees. 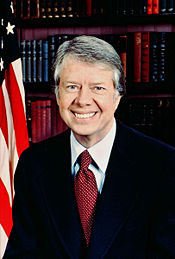 During his term in office, President Carter made 262 successful judicial appointments where the nominee was confirmed to their relevant court. Of those appointments, 259 were Article III judges. Carter made no nominations to the Supreme Court.

Of his Article III appointees Carter appointed 56 judges to the United States Courts of Appeal and 203 judges to U.S. district courts.