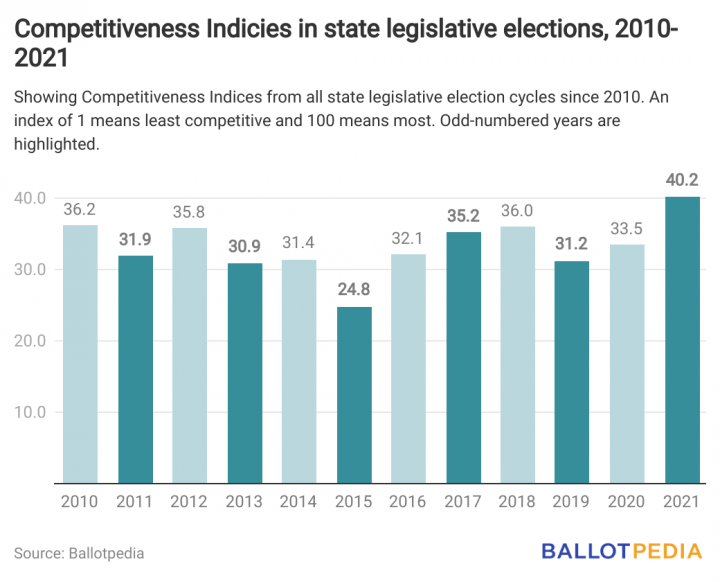 According to Ballotpedia’s Annual State Legislative Competitiveness Report, state legislative elections in 2021 are the most competitive since at least 2010.

Ballotpedia’s Competitiveness Index is a standalone figure representing the general level of competition in an election cycle. It is calculated using the percentages of open seats, incumbents in contested primaries, and seats with major party competition.

The 2021 state legislative election cycle received a Competitiveness Index of 40.2, the highest on record, to date.

The New Jersey State Senate and General Assembly typically have high levels of major party competition every election cycle. In the Virginia House of Delegates, however, there are 93 contested seats in 2021 compared to 41 in 2011—a 78% difference.

The chart below shows the percentage of open seats from 2011 to 2021. This includes not only elections in New Jersey and Virginia but Louisiana and Mississippi, as well. Those states hold elections every four years in odd years immediately preceding a presidential election year (2011, 2015, 2019, etc.).

The percentage of open seats tends to dip in the years immediately following a presidential election. This is partly because states holding elections those years—New Jersey and Virginia—do not have term limits. Louisiana, on the other hand, has term limits for legislators, which dictate how long an incumbent can remain in office.

The chart below shows the raw number of open seats from each odd-year election cycle since 2011. The yellow bar represents incumbents who could not legally seek re-election due to term limits and the brown bar represents all other departures. In 2019, term-limited departures accounted for 45.6% of all open seats.

Overall, 203 incumbents filed for re-election, 80% of whom advanced to the general election without a primary challenge. The remaining 20% represented 40 incumbents: 23 Democrats and 17 Republicans.

These contested primaries resulted in the defeats of eight incumbents: five Democrats and three Republicans. Eight defeats is a relatively high number for the three chambers holding elections in 2021. Before 2021, the highest number of incumbents defeated in primaries in a given election cycle was two.

Ahead of the general elections, 2021 is already tied for the second-most incumbents defeated in these chambers since 2011.

Use the links below to learn more about Ballotpedia’s Annual State Legislative Competitiveness including historical comparisons, chamber-specific analyses, and additional context: