Fifty-one of the 191 New York state legislators running for re-election this year—46 Democrats and five Republicans—face contested primaries. That equals 27% of incumbents seeking re-election, an increase from previous election cycles. The remaining 73% of incumbents are not facing primary challengers.

A contested primary is one where more candidates run than nominations available, meaning at least one candidate must lose.

The total number of contested primaries—including those without incumbents—also increased compared to recent election cycles. With 213 districts, there are 426 possible primaries every election cycle.

New York allows fusion voting, where more than one political party can support a common candidate. It is common for candidates to seek both major and third-party nominations. Under this system, if a candidate loses one primary but wins another, he or she may appear on the general election ballot with the nomination of the party won.

New York is holding two separate primaries this year due to delays caused by redistricting. Primaries in the 150 Assembly districts are scheduled for June 28. The 63 Senate districts will hold primaries on August 23.

Across both chambers, 25 of those districts were left open, meaning no incumbents filed to run, a decrease from the 33 open districts in 2020 but up from the 18 in 2018.

New York has been a Democratic trifecta since the party won a clear majority in the Senate in 2018. Democrats had held a numerical majority before that time, but Republicans controlled the chamber through a series of power-sharing agreements and Democratic members caucusing with the party. 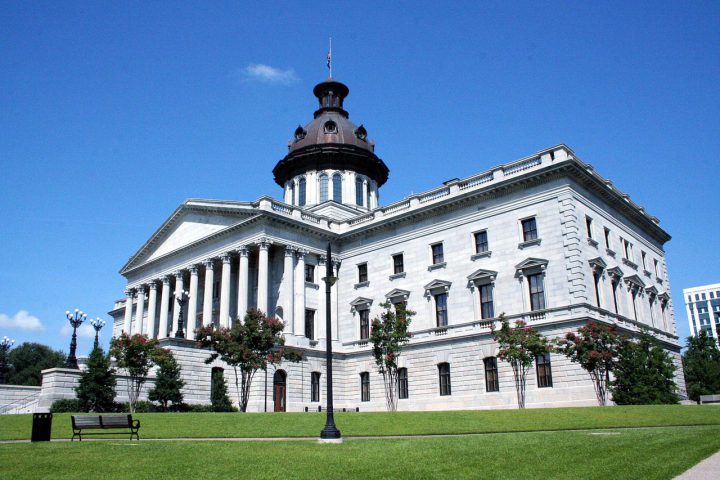 A decade-high 23% of state legislative seats up for election this year are open, meaning no incumbents filed to run. This is based on an analysis of 30 states where Ballotpedia has collected post-filing deadline data in 2022.

Open seats can alter the makeup of state legislatures both in terms of politics and personality. Since no incumbents are present, newcomers to the chamber are guaranteed to win these seats. The number of newcomers can also increase if incumbents lose in primaries or general elections.

Of these four, Arizona, Colorado, and Maine all have term limit laws, which can force incumbents to leave office after serving a maximum number of years. Maine had the largest number of term-limited incumbents in this group with 46, followed by Colorado with 14, and Arizona with nine.

In three states—Utah, Indiana, and South Carolina—less than 10% of the state legislature is guaranteed to newcomers based on open seats. None of these three states have term limit laws.

Across the 21 states that have held primaries, 5.4% of incumbents running for re-election have lost, an elevated level of incumbent losses compared to previous cycles.

In addition to earlier primaries, these totals include initial results from primary runoffs in Alabama, Arkansas, and Georgia. So far, four incumbents have lost in those states:

No incumbents have lost in Alabama’s primary runoffs so far.

Twenty-seven of these 111 incumbent defeats (24%) were guaranteed due to redistricting. When states redraw legislative lines, incumbents can oftentimes end up in a new district with other incumbents leading to incumbent versus incumbent primaries or general elections. Since, in these races, there are more incumbents running than nominations or seats available, at least one incumbent must always lose.

Of the 21 states that have held primaries so far, five have Democratic trifectas, 13 have Republican trifectas, and three have divided governments with Democrats controlling the governorship and Republicans controlling both legislative chambers. Across these 21 states, there are 2,650 seats up for election, 43% of the nationwide total.

The figures for 2022 will likely increase. There are currently 37 uncalled primaries featuring incumbents: 19 Democratic and 18 Republican.

Yesli Vega defeated Derrick Anderson, Bryce Reeves, Crystal Vanuch, and two other candidates in the Republican primary for Virginia’s 7th Congressional District on June 21, 2022. Rep. Abigail Spanberger (D) is running for re-election in the redrawn 7th District. Vega had 29% of the vote to Anderson’s 24%, Reeves’ 20%, and Vanuch’s 17%.

At the time of the primary, Vega served on the Prince William County Board of Supervisors and worked in law enforcement. Her campaign website detailed a platform that included advocating for the “conservative values of freedom, limited government, the rule of law, and a firm reliance on our Creator.” Former U.S. Rep. Dave Brat (R-Va.), who lost to Spanberger in 2018, endorsed Vega, along with U.S. Sen. Ted Cruz (R-Texas) and Ginni Thomas, the wife of Supreme Court Justice Clarence Thomas.

Anderson served as a Green Beret in the U.S. Army. After retiring from active duty, he received a J.D. from Georgetown University. In Ballotpedia’s Candidate Connection Survey, Anderson listed his three priorities as “standing up for our veterans, keeping our country and communities safe, and stand up for our conservative values.” Based on fundraising totals reported to the Federal Election Commission (FEC) in April 2022, Anderson led the field in fundraising and spending. U.S. Sen. Tom Cotton (R-Ark.) and Greene County Supervisor Davis Lamb endorsed Anderson.

Reeves was elected to the Virginia State Senate in 2011. He served in the U.S. Army and worked for the Prince William County Police Vice/Narcotics Bureau. Reeves raised and spent the second-most of the six candidates based on FEC reporting. Reeves campaigned on his legislative record and his history of winning in what he called “Democrat districts,” citing victories in 2011 and 2019. U.S. Sens. Mike Lee (R-Utah) and Marco Rubio (R-Fla.), and state Del. Nick Freitas (R) endorsed Reeves.

At the time of the primary, Vanuch served on the Stafford County Board of Supervisors and worked in the healthcare field helping individuals with terminal or chronic illnesses find affordable treatment. In Ballotpedia’s Candidate Connection Survey, Vanuch listed her three priorities as decreasing government spending, defending law enforcement, and supporting the right of parents to make decisions for their children. U.S. Rep. Elise Stefanik (R-N.Y.) endorsed Vanuch.

The general election is expected to be competitive. Three independent forecasting outlets rated the general election as Toss-up, Lean Democratic, and Tilt Democratic. Nathan Gonzales of Roll Call said that President Joe Biden (D) would have won the district by seven percentage points in the 2020 presidential election and Gov. Glenn Youngkin (R) would have won the district by six points in the 2021 gubernatorial election. Spanberger defeated Brat by two points in 2018 and Freitas by two points in 2020.

Also running in the primary were Gina Ciarcia and David Ross.

Incumbent Michael Guest (R) and Michael Cassidy (R) are running in a Republican Party primary runoff in Mississippi’s 3rd Congressional District on June 28, 2022, to determine which Republican candidate will run in the district’s general election on Nov. 8, 2022. Guest has represented this district in Congress since 2019.

In the June 7 primary, Cassidy received 47.5% of the vote, and Guest received 46.9%. In Mississippi, a candidate must receive over 50% of the vote to advance directly to the general election. Since no candidate received a majority of votes on June 7, Guest and Cassidy advanced to the June 28 primary runoff.

Guest has represented Mississippi’s 3rd Congressional District for two terms. He is a member of congressional committees dealing with homeland security, transportation, and ethics. He served as the district attorney for Rankin and Madison counties before being elected to Congress. Guest’s campaign says he has more political experience and has a conservative voting record in Congress. After the June 7 Republican primary, Guest thanked his supporters and said, “It appears we are headed to a runoff on 6/28. I’ll be working to earn your vote because we need PROVEN, conservative leadership with a real record of fighting for our values—that’s the difference in the runoff election!”

Cassidy is a political newcomer and military veteran who said that he is running for Congress to continue serving his country. Cassidy’s campaign says he is more conservative politically than Guest. After the June 7 primary, Cassidy said he was, “grateful to the people of Mississippi’s 3rd Congressional District for giving me the most votes…This is the first step in replacing our current congressman with someone who better represents [our] conservative Mississippi values.”

Guest voted along with thirty-four other House Republicans to create a bipartisan commission to investigate the events of Jan. 6, 2021. According to the New York Times, “the decision to buck their party and former President Donald J. Trump has imperiled several Republicans in their primaries this year” despite the fact that the House’s proposal later failed in the Senate.

Cassidy mentioned this vote when he challenged Guest to a debate after the June 7, 2022, primary: “I am calling on Mr. Guest to give the voters the opportunity to see us debate and so he can be held accountable for voting for the Democrats’ January 6th Commission.”

Guest’s campaign responded saying, “Congressman Guest did not vote for Nancy Pelosi’s Select Committee on January 6th that’s currently in the news…He voted against the Select Committee because he knew it would lead to the witch hunt we are seeing now…[Cassidy] has spent a personal fortune to mislead the people of Mississippi about Congressman Guest’s conservative, Christian character.”

Before the primaries, the Cook Political Report, Sabato’s Crystal Ball, and Inside Elections all rated Mississippi’s 3rd Congressional District as a solid/safe Republican seat. This means that the winner of this Republican primary runoff is very likely to win the general election as well.

Each candidate said his experience prepared him for the position. Allen was a Pike County Probate Court judge and said he administered more than a dozen elections without error. Zeigler, the state auditor, said he had been a “watchman against government waste, mismanagement and corruption” and would be a watchman for election integrity.

Republicans have held the Secretary of State office in Alabama since 2007.

Katie Britt defeated Mo Brooks in the Republican primary runoff for U.S. Senate in Alabama on June 21, 2022. The pair advanced from a field of six candidates in a May 24 primary. Britt had 63% of the runoff vote to Brooks’ 37%. In the primary, Britt received 45% of the vote and Brooks received 29%. Incumbent U.S. Sen. Richard Shelby (R), first elected in 1986, did not run for re-election. Michael Durant, who finished third in the primary with 23% of the vote, said he would not endorse or vote for either candidate in the runoff.

Brooks was elected to represent Alabama’s 5th Congressional District in 2010 and served as Madison County Commissioner from 1996 to 2010. Brooks’ campaign ads highlighted his speech at Trump’s rally on Jan. 6, 2021, which preceded the U.S. Capitol breach. Brooks campaigned as an America First candidate, a term often associated with the platform of Trump and candidates who have said they support his agenda. Brooks’ endorsements included Sens. Ted Cruz (R-Texas) and Rand Paul (R-Ky.), and House Freedom Caucus Chairman Scott Perry (R-Pa.). Trump initially endorsed Brooks in the primary election before rescinding his endorsement in March 2022.

Britt is also expected to win the general election. At the time of the runoff, three independent race forecasters considered the race either Solid Republican or Safe Republican. Before Doug Jones’ (D) tenure from 2018 to 2021, the last Democrat to represent the state in the U.S. Senate was Howell T. Heflin, who left office in 1997. Trump won the state with 62% of the vote in the 2020 presidential election.