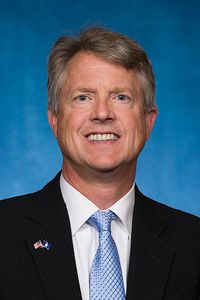 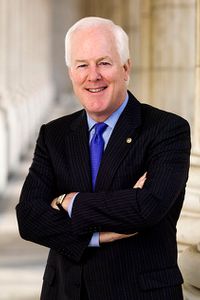 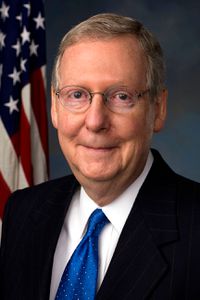 Incumbent Mitch McConnell (R) defeated Amy McGrath (D), Brad Barron (L), and Randall Lee Teegarden (Unaffiliated) in the November 3, 2020, general election for U.S. Senate in Kentucky. As of Oct. 14, McGrath had raised $90 million—more than any other U.S. Senate candidate in the country other than Jamie Harrison (D). McConnell was sixth in fundraising nationally with $57 million. 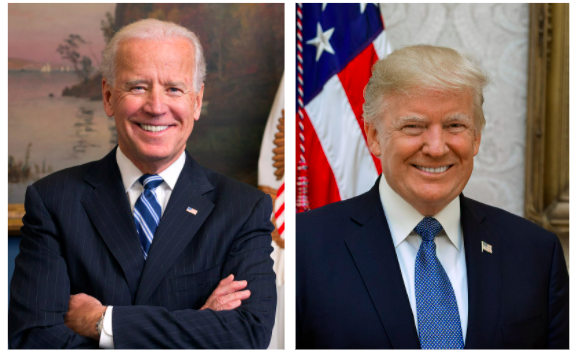 Biden’s $822 million in overall fundraising is the highest figure for any presidential candidate at this point in the past four election cycles. Former President Barack Obama (D) raised $792 million in inflation-adjusted funds at this point in 2008. On the other hand, Trump has more than doubled his fundraising from this point in his 2016 campaign for president: Trump had $557 million, according to Tuesday’s FEC reports, compared to $236 million in October 2016.

Biden’s cash-on-hand total also tops campaign money records. Biden’s total of $177 million is the highest of any candidate’s at this point in the election cycle, topping Obama’s $172 million inflation-adjusted total in 2008.

Biden and Trump’s combined $1.38 billion in fundraising is the highest across the four most recent election cycles. At this point in the 2008 election, the presidential campaigns of Obama and Sen. John McCain (R) had raised a combined inflation-adjusted $1.26 billion. 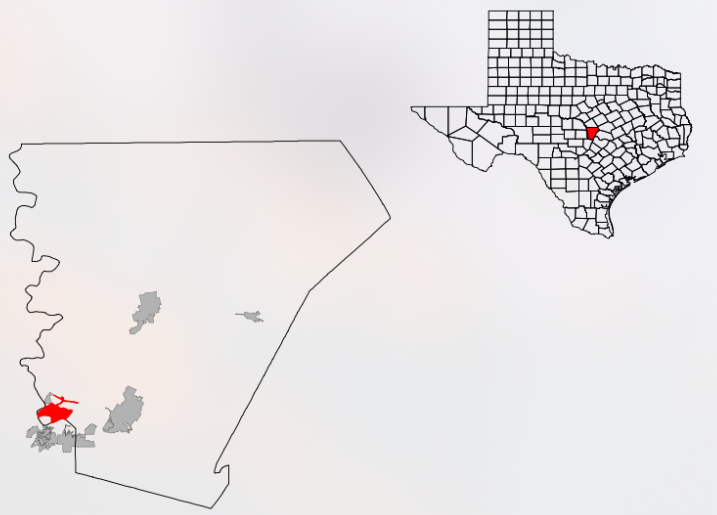 An effort in Granite Shoals, Texas, to recall Mayor Carl Brugger and Councilman Bruce Jones was approved for the ballot after petitioners submitted enough valid signatures. The recall election against Jones will be held on May 1, 2021. Brugger resigned on Oct. 13, 2020, four days after the signatures were verified.

Brugger cited the recall effort as a reason for his resignation. He wrote in his resignation letter that he hoped that stepping down would reduce tensions in the city. Brugger was first elected in 2015 and would have been unable to run for re-election in 2021 due to term limits.

The recall effort was initiated by the Citizens’ Rights Group of Granite Shoals in August 2020 in response to a unanimous vote by the city council on Aug. 4 to give City Manager Jeff Looney a $37,000 raise and four weeks of vacation. On Aug. 11, Mayor Pro Tem Jim Davant made a motion to rescind the pay increase. The motion was seconded by Councilman Ron Munos, but the motion failed by a 5-2 vote. Brugger, Jones and Councilmembers Libby Edwards, Steve Hougen and Will Skinner voted against the motion.

Davant defended the decision to vote in favor of a raise for Looney. He said, “He’s done an excellent job. He has 34 years of experience, and he has a good education. We did a survey with a third party. They came back with midpoints, minimums, and maximums. When we looked, Jeff Looney was at rock bottom. I know people are critiquing us. It’s easy to pick cities in West Texas (to compare to Granite Shoals). Those cities aren’t adjacent to Austin and to us, and they don’t have the cost of living we have here.”

Recall organizers were required to submit valid signatures equal to 6.5% of the city’s registered voters—152 signatures—to force a recall election. On Oct. 9, 2020, City Secretary Elaine Smith announced that 186 signatures were found valid out of the 221 signatures handed in.

Polling in recent weeks has shown Raphael Warnock (D) leading incumbent Sen. Kelly Loeffler (R) and Rep. Doug Collins (R), who have been tied within, or near, margins of error. Recent polls from Quinnipiac showed Warnock with 41%, Collins with 22%, and Loeffler with 20%. Polls from Public Policy Polling show a similar margin, with Loeffler at 24% instead of 20%.

Twenty-one candidates are on the ballot: eight Democrats, six Republicans, five independents, one Green Party candidate and one Libertarian. If no candidate receives a majority of the vote on Nov. 3, a runoff between the top two vote-getters, regardless of party, will take place Jan. 5, 2021.

RealClearPolitics’ polling average for the presidential election in Georgia suggested a competitive race, as of Monday, with Joe Biden (D) at 47.8% and Donald Trump (R) at 46.6%.

The seats of Montana Supreme Court Justices Laurie McKinnon and Jim Shea will be up for a nonpartisan election in November. Jim Shea is running uncontested while McKinnon is running in a race with Mike Black.

The seven justices on the Montana Supreme Court are elected in nonpartisan elections for eight-year terms. The candidates compete in primaries where the top two contestants advance to the general election. Whenever a vacancy occurs, the governor appoints a replacement from a list produced by the Montana Judicial Nominating Commission. The appointee, if confirmed by the Montana Senate, then remains in the seat until the next general election after their appointment. At this time, the appointed justice must run for re-election as the incumbent in a nonpartisan election to complete the remainder of the unexpired term.

Across all types of state supreme court elections, incumbent justices running for re-election won 93% of the time from 2008-2019. Montana has not seen an incumbent supreme court justice lose an election during this same time frame. 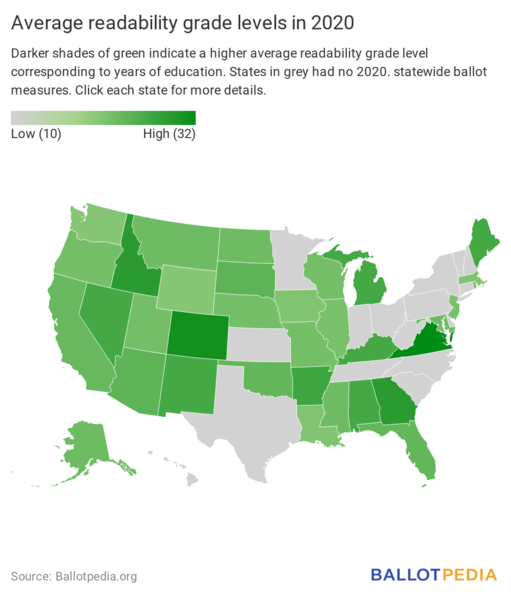 2020 ballot measure readability analysis: ballot language is written at an average reading grade level of 17 (first-year graduate school), down from between 19 and 20 in 2018

The average statewide ballot measure in 2020 is written at a reading grade level of 17, similar to the reading level in first-year graduate school. The 2020 reading level is down from between 19 and 20 in 2018, according to Ballotpedia’s annual analysis of the readability of ballot language for the 128 statewide measures across 34 states in 2020.

Below are some of the highlights of the report.

• The average Flesch-Kincaid Grade Level for the ballot titles (ballot questions) of all 128 statewide 2020 ballot measures was about 17.

• The average ballot title grade for all measures in a single state averaged together ranged from 10 in Rhode Island, Washington, and Wyoming to 32 in Virginia.

• In 2018, the average Flesch-Kincaid Grade Level for ballot titles was between 19 and 20, and average state scores ranged from eight to 42.

• Ballotpedia identified 67 measures with a ballot summary that was set to appear alongside the ballot question on the ballot. The average Flesch-Kincaid Grade Level for the ballot summaries was about 14.

• The average ballot summary grade for all measures in a single state averaged together ranged from 10 in Louisiana and Maryland to 20 in Arkansas.

• The average ballot title grade was highest for ballot titles written by state legislatures (19) and other state boards and offices (18).

• Initiative proponents wrote the ballot language for eight of the measures (in some cases, with help from state officials). The average ballot title grade for those measures was 15.

• The 2020 ballot measure with the longest ballot title was Colorado Proposition 118 concerning a paid family and medical leave program. The ballot question had 270 words.

• The states with the shortest ballot titles or questions on average were Florida, California, Iowa, and Alaska; all of these except Iowa did feature additional ballot summaries or explanations.

A recall election is taking place on November 10 against Mayor Dan Holladay in Oregon City, Oregon. Recall organizers started the effort to recall Holladay in June after he made social media posts about police violence.

Holladay also faced criticism in April for planning to go against the stay-at-home orders issued by Governor Kate Brown in response to the coronavirus pandemic by allowing businesses in Oregon City to reopen.

Recall organizers had until September 21 to submit 2,400 valid signatures to put the recall election on the ballot. Signatures were submitted in two batches, and the total came to 3,451 signatures. On October 1, City Recorder Kattie Riggs announced that 3,037 signatures had been verified. Holladay was then given the opportunity to resign or to submit a statement of justification by October 6. Holladay submitted a statement of justification, which read:

“STAND WITH DAN — NO RECKLESS RECALL

“SERVING YOU: I’ve served as your Oregon City Mayor and Commissioner one decade with YOU THE CITIZEN as my boss. OUR DIVERSE COMMUNITY AND RESIDENTS COME FIRST.

“SIX YEARS OF CITIZEN SUCCESS: NEW LIBRARY, POLICE AND COURTS FACILITY and VOTE NO ON RECALL and we will continue my leadership for new public works facility.

“PUBLIC SAFETY. I will always stand with our excellent police officers.

“KEEP OC WORKING: Oregon City has TOP RATED ROADS: Under me as your Mayor we have delivered the best services.

“WE WON: Great American Main Street award in 2018(the only city in Oregon to have won this award.)

“RELATIONSHIPS FOR OC SUCCESS: I have built strong relationships with the local, county, state leaders.

“RULE OF LAW: I will always stand up for the rule of law and equal treatment for ALL citizens.

“FREE CITIZENS: We all have rights to believe and say what we believe and not be ridiculed, canceled or recalled for fighting for our citizens first.

“HELP ME HELP YOU KEEP OREGON CITY A GREAT PLACE:

“VOTE No on the RECKLESS RECALL”

On June 22, Adam Marl, the campaign manager for the Committee to Recall Dan Holladay, issued a statement on the recall effort. His statement read: “The mayor’s dismissive responses to current events have put the spotlight on his past actions in office that have not received the scrutiny they deserve. When the citizens voiced their concerns, he deliberately limited constructive dialogue between his colleagues and constituents. Since then, issues of corrupt business dealings and multi-million dollar lawsuits have come to light, which prompted his fellow commissioners to censure him on two counts and order an independent investigation. Mayor Holladay has lost the faith of the city that he is attempting to lead, with even his fellow commissioners calling for his resignation. His refusal to resign for the good of the city has prompted this nonpartisan grassroots campaign to lead the concerted efforts of those who believe in a better future for Oregon City. We will fight with resolve, and will fight to win.”

The number of valid signatures required to force a recall election in Oregon is 15% of the total number of votes cast in the public officer’s electoral district for all candidates for governor at the last election at which a candidate for governor was elected to a full term. Signatures are required to be turned in no later than 90 days after the petition is filed.